GET NEWS AND ARTICLES IN YOUR INBOXPrint
A
A
Home | Mises Library | Ed Stringham: Private Governance 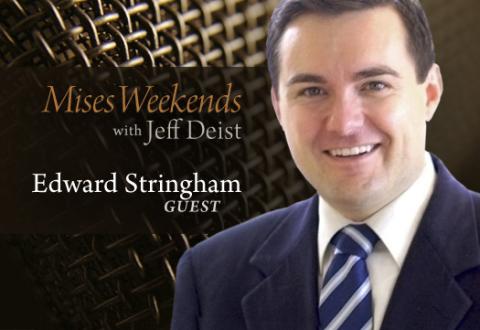 Our guest this weekend is Edward Stringham, professor of Economics at Trinity College in Hartford, Connecticut. He is the author of a fantastic new book called Private Governance: Creating Order in Economic and Social Life. In this book, Ed looks back at the history of private legal systems, and in so doing demolishes the idea that only the state can manage and adjudicate human conflicts. Today, Ed gives some concrete, real-world examples of how private governance operates in our statist world. If you're interested in Rothbardian and Hoppean anarcho-capitalism, you'll find Ed's book a great addition to your library, and you'll enjoy hearing this interview with Edward Stringham.

Edward Stringham is Davis Professor of Economic Organizations and Innovation at Trinity College in Hartford,...

Ed Stringham and Jeff Deist discuss why the US criminal justice system is broken, and how private security firms could...

Jeff Deist and Ed Stringham demolish the idea that only the state can manage and adjudicate human conflicts.