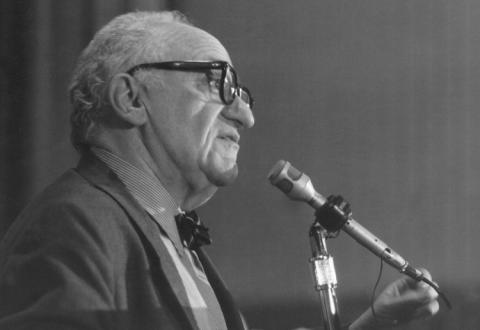 Presented to the Department of History at New York University on December 4, 1979. The description below is excerpted from the "Rothbard Lectures on American History: Lost and Found" by Chris Sciabarra.

The central theme of Rothbard’s lecture was the conflict between “Liberty” and “Power” throughout history. He did not deny the complexities of historical events and did not disapprove of alternative approaches to the understanding of history. Drawing from Albert Jay Nock, however, he believed that the contest between “social power” (embodied in voluntary institutions and trade) and “state power” (in which certain interests used the coercive instruments of government to expropriate others for their own benefit) was central to understanding the ebb and flow of historical events. Social power, which reached its apex in the eighteenth and nineteenth century, breeds prosperity, civilization, and culture; state power, which came to dominate the twentieth century, produced the most regressive period in human history—as government expanded its powers through warfare and a maze of regulatory agencies, central banking, and welfare-state bureaucracies. Throughout his talk, he drew on the pioneering scholarship of Bernard Bailyn on the ideological origins of the American Revolution; Jackson Turner Main on the role of the antifederalists in restraining, through the Bill of Rights, the “nationalist” forces that forged the counter-revolutionary Constitution; Paul Kleppner, who provides an enlightening take on the struggle between “liturgical” and “pietist” cultural forces, the latter viewed as a key element in the emergence of the Progressive Era and the growth of government intervention; and Gabriel Kolko, whose revisionist work on the role of big business in the move toward the regulatory state explains much about the rise of corporatist statism in the twentieth century and beyond.

The entire 90-minute talk, which included a brief question-and-answer session, is peppered with that edgy Rothbardian wit, which entertained as much as it informed. By the end of the lecture, Rothbard was given a standing ovation.

Special thanks to Chris Sciabarra for making this important recording available.