GET NEWS AND ARTICLES IN YOUR INBOXPrint
A
A
Home | Mises Library | End the Fed! How Ron Paul Made Monetary Policy an Issue

End the Fed! How Ron Paul Made Monetary Policy an Issue 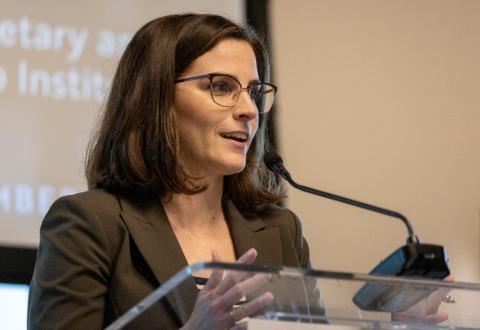 Includes an introduction by Jeff Deist. Recorded in Lake Jackson, Texas, on December 4, 2021.

Ron Paul's two campaigns for president (2008 and 2012) were watershed moments for liberty-minded people around the world. The "Ron Paul Revolution"—centered around his undiluted message of peace, property, and markets—changed the way millions thought about the American empire and the American financial system. Dr. Paul's focus on central banking and foreign policy caught politicians and pundits off guard, forcing them to scramble for explanations of our Middle East policy and Soviet-style central planning at the Fed. Politics in America has not been the same since the "Giuliani moment" and "End the Fed." The Ron Paul Revolution was both a political and cultural phenomenon.

Lydia Mashburn is the managing director of the Center for Monetary and Financial Alternatives at the Cato Institute. Prior to joining the Center at its launch in October 2014, she was program manager for the Financial Markets Working Group at the Mercatus Center at George Mason University, where she also managed the monetary policy portfolio and health care program. Mashburn served as policy director of the House Subcommittee on Domestic Monetary Policy and Technology under the chairmanship of Congressman Ron Paul. During her time there, the Subcommittee made thousands of pages of previously unpublished government documents available to the public, held more hearings than in the three previous Congresses combined, and passed “Audit the Fed,” a bill to aid Congress in its constitutional oversight of monetary policy, with a bipartisan majority of 327–98. Mashburn’s career in public policy began as a researcher with the Joint Economic Committee where she dealt extensively with the Affordable Care Act, the Dodd-Frank Act, and TARP. Becoming project lead for the JEC’s health care chart, she distilled the complex Affordable Care Act into graphical form. Mashburn currently serves on the Investor Advisory Committee at the U.S. Securities and Exchange Commission. She received her BA in economics and a minor in international relations from the College of William and Mary.

Lydia Mashburn is the managing director of the Center for Monetary and Financial Alternatives at...

End the Fed! How Ron Paul Made Monetary Policy an Issue