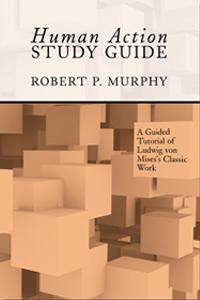 It has been a work years in the making, but finally the Study Guide to the Scholar's Edition of Ludwig von Mises's Human Action, is available. You can order the handsome volume here, and — as we've come to expect — the Mises Institute is generously providing the entire book free for download here.

We hope that this new guide makes Mises's magnum opus less intimidating. Each chapter of the guide starts with a summary of the chapter from Human Action, broken down not just by section but also down to the italicized subheadings in Mises's text. Then, the study guide has a section on Why It Matters, in which the chapter is placed in context, either historical or even within the book itself. (While writing the guide, I discovered that the progression of the chapters in Human Action, as well as their arrangement into Parts, was much more methodical than I had realized during previous readings.)

Once you realize that Mises has a definite plan for the book — it is certainly not a Joycean stream-of-consciousness riff — then its 881 pages are not as daunting. You realize with each chapter, "Yes, now I see why Mises couldn't really get on to Important Topic X until he first dealt with the material he just covered."

After placing the chapter in context, the study guide then offers Technical Notes. Often, these relate the chapter's content to the mainstream approach, to help the graduate student or professor digest the Misesian framework. This section also points out possible problems with the material in the chapter, such as an objection raised by later Austrians, or even a possible contradiction with other parts of Human Action. The purpose here, of course, is to encourage critical reflection on Mises's great work. It is simply not true that Austrians "worship" Mises and refuse to criticize him, though critics often employ this straw man.

Finally, each study-guide chapter comes with a list of questions (the bulk of which were prepared by Amadeus Gabriel). In contrast to the Technical Notes, the purpose of the questions is to ensure that the reader has grasped the essential points in each section of the chapter.

Since I discovered it in high school, I have now read Human Action at least three times cover to cover, and each time it was different. I am confident that it is one of the most important books (let alone economics books) written in the 20th century. For those who have dabbled with it, I strongly encourage you — with the help of the study guide — to pick it back up and start reading from the beginning. If you would just decide to suck it up and start reading from page 1, you may find that "the boring part where I get stuck" never comes.

Let me address two typical objections from self-identified Misesians who have yet to read Mises's masterpiece:

Objection #1: "I'm already a staunch libertarian for philosophical reasons. I don't need to understand how the free market works. Even if socialism outproduced capitalism, I would still support liberty. So I tip my hat to others who want to slog through it, but life's too short to waste on an 800+ page economics book."

Unfortunately, the globe is littered with despotic governments precisely because most people don't have a philosophical passion for liberty. To achieve a free society, it is necessary to persuade a great portion of our neighbors that the government will provide neither freedom nor security. But given that these people are already willing to sacrifice abstract rights if politicians promise that such concessions will lead to prosperity and peace, appeals to such principles alone are likely to go nowhere. It is much more persuasive if the advocate of liberty can show that free markets not only sound nice in theory, but they actually work. And the best way to demonstrate that is to first learn Misesian economics.

Objection #2: "Mises is great, but he uses big words and besides, I already read Man, Economy, and State. Whatever good that was in Human Action, Rothbard stated much more clearly in his own book."

I admit, if a modern Austrolibertarian has read Rothbard's entire work, then such a reader has full command of Austrian economics and is well-equipped to enter the battle of ideas. However, Human Action is so much more than an economics book. If for no other reason, modern Austrians should read the book just to appreciate the sheer might of Mises's intellect. I can't think of another writer who shows such competence in discussions of issues as diverse as the fall of Rome, the Heisenberg uncertainty principle, German military strategy in the First World War, the Weber-Fechner physiological law, the foundations of probability theory, and Kantian philosophy.

In closing, I would once again stress to modern Misesians who have yet to read Human Action that it really is well worth the effort. In it you'll find that even stronger than his belief in free markets was Mises's faith in the power of reason. The fact that we're still talking about his ideas — and that we created a study guide to help newcomers understand them — shows that Mises hit the bull's-eye once again.