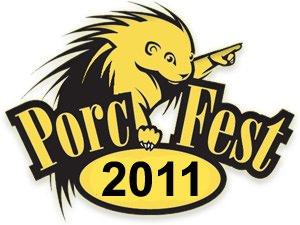 07/04/2011Robert P. Murphy
I recently spent five days in Lancaster, NH, home of the annual Porcupine Freedom Festival, or "PorcFest." Although PorcFest may not be for everyone, libertarians — especially younger ones — who have never attended should definitely consider adding it to their summer vacation plans.

I'm a workaholic, and I also travel about twice a month to conferences and public lectures. Yet after a day at PorcFest, something was different. At first I couldn't identify this strange feeling of carefree giddiness. Then it hit me — I was having fun! This blew my mind.

Indeed, many of the more than 1,000 attendees at PorcFest this year went simply for the camaraderie with people who share their unusual worldview. Located at a campground buried in the rolling hills of New Hampshire, PorcFest is a great place to vacation for those who are into camping — and who aren't scared at the thought of being surrounded by hundreds of anarchists, many of whom are openly armed.

… With All the Amenities of Civilization

Partly because I was flying, but also because I am not fully in touch with nature, I opted to stay at the motel, which was adjacent to the campgrounds. Although it was spotty, I even had an Internet connection. So PorcFest is as rustic as you want to make it.

Along these lines, I am embarrassed to say that I actually packed some protein shakes in my suitcase, because I was worried that a group of 1,000 punk anarchists might be reduced to eating bark off the trees by the weekend. This was a huge miscalculation, and showed how little faith even I have in the free market.

There were numerous food options, because many of the attendees at PorcFest are vendors. The one whom I frequented the most was "George," with his egg breakfast sandwiches. As I'm in training, I didn't dare try the more decadent dishes such as the ten-strip bacon-weave gyro-meat artery-clogger known as the Trainwreck. (Robert Smith from NPR's PlanetMoney podcast visited PorcFest too, and he also sampled George's cuisine.)

Another vendor who sucked me in ("Jake") was serving Thai food that was surprisingly authentic for being prepared under a tent in New Hampshire. His signature dish was a "Thai-rrito," a Thai version of a burrito that consists of chicken curry and rice, rolled into a flour tortilla. (For next year, I humbly suggest the term "currito," which rolls more trippingly off the tongue.) Someone told me that at PorcFest 2010 Jake realized that people didn't want to sit down with a plate to eat their curry — they had friends' campers to visit and beer to drink! So the Thai-rrito — which could easily be eaten while walking — was developed in response to the needs of the consumer.

Besides worrying about my nutritional needs, before getting to PorcFest I was also a bit unsure what to expect with the crowd. My friend from school, Jason Osborne, and his wife Sharon are deeply involved in both PorcFest and the Free State Project, and he had actually been the one to invite me up (for a talk on private law and defense). So I knew that some people there would be libertarians in the Rothbardian tradition.

On the other hand, I worried that maybe most of the young people there would be like the self-described anarchists who marched with us in rallies in New York City when the World Bank held meetings. Those kind of kids weren't into Rothbard at all. No, they wanted to spray-paint, "Cows have feelings too!" on McDonald's restaurants. (Okay that's a cheap joke, but my point stands that not all cop-hating anarchists have read For a New Liberty.)

As with my fears over the food selection, here too I was being far too pessimistic. For example, during one of my visits to the Thai food tent, Jake (if memory serves) sat down to talk with me as I ate. I introduced myself as Bob, and he asked if I had been to any of the events. I explained, "Oh, actually I'm one of the speakers, so yeah I was down at the pavilion earlier today giving a talk." Jake did a double take and said, "Wait a minute, you're Bob Murphy? Holy cow!" (Now the reader can see why this was my kind of camping event.)

It turns out that easily hundreds of the attendees were big fans of the Mises Institute and LewRockwell.com. They were quite well-read in Austrian economics and Rothbardian libertarian theory. Indeed, there were other speakers at PorcFest from the Austro-libertarian ambit, including Dan D'Amico, Roderick Long, and Jacob Huebert.

PorcFest provided a mix of both intellectually stimulating activities — such as the panel discussions on agorism and strategies for educating your children in New Hampshire without subjecting them to government curricula — as well as purely fun daytime events such as kickball and a game called Humans versus Zombies (for which I got into costume but then never actually played).

At night, people would hang around their camp sites, grilling, drinking, and plotting the downfall of the state. There were dances with various themes, and a few bands. I was blown away by the performance of Jordan Page, whose Ron Paul-ified remix of Pink Floyd's "The Wall" was simply amazing.

Before leaving this section, I want to warn potential visitors of a more conservative background that plenty of people were breaking drug laws. (At times and in certain locations, PorcFest smelled like a Beastie Boys concert.) Having said that, there truly was an effort to respect the parents who had brought younger children and generally not act like an idiot.

The best example: It was late and I was hanging around the pavilion where Osborne was hosting the karaoke event. I was introduced to a guy who apparently had been selling a large quantity of brownies that contained an ingredient that was not in accordance with all statutes. Just as we started exchanging pleasantries (but no merchandise, mind you) a clearly underage kid came up and asked, "Hey are you the guy selling brownies?" He immediately answered, "Not to you!" and the kid slinked away.

What was really interesting at PorcFest was the advertisements and products designed for this particular demographic. For example, the first beer I purchased was from a girl wearing a shirt that said, "I don't talk to police, I record them." (She was advertising for CopBlock.org.)

Another guy (Japhet) gave me his card for an online game that he had developed, which (he claimed) incorporated insights of Austrian economics far more than the blockbuster competitors. While in my discussion at the Thai food tent, people were saying that as PorcFest continued to grow, and more and more food vendors blossomed, eventually it would be good to have some type of private rating agency. Perhaps someone with restaurant experience and whom everybody trusted, could go around and sign off (or not) on the safety of a given operation. Such a designation wouldn't be a requirement for selling food at PorcFest; it would just be a useful thing for a new vendor to have, in order to attract customers.

In a related vein, another guy (Andre) was brainstorming about building some type of reputational online system for those who had moved to New Hampshire as part of the Free State Project. Since people involved with the FSP would be loath to use government courts, such a system (analogous to seller ratings on Amazon) would be very useful to minimize the vulnerability of the fledgling community to con artists and other criminals.

The most immediately practical "good idea" I came across was from guys who had laminated a business card containing a US pre-1964 dime. On the back of the card is a table showing how much silver such dimes and quarters contain, and what their market value was when silver was $30/oz. What was really neat is that there is a phone app to help you keep track of your silver coins, and they also came up with the refinement of putting advertisements on the front of the card.

The beauty of this approach is that the government can't possibly pull out the von NotHaus charge, claiming that people producing such "dime cards" are counterfeiting US currency. Of course they're not — they're just providing a convenient package for US currency. I was reminded of this when I threw a handful of the dime cards in my bag, and then wondered if TSA would give me trouble. How could they? I'm just carrying a bunch of dimes in my bag.

On the topic of silver, let me correct one potential source of confusion from the NPR podcast I linked to above. The reporter admits that he intentionally wanted to use silver to buy the food from George's tent. In other words, most vendors at PorcFest are perfectly happy to accept Federal Reserve notes. (That's all I ever used.) So even though his coverage was surprisingly evenhanded for an NPR piece on libertarians, on this issue they had to manufacture a "problem" with the free-market society of PorcFest that is nonexistent.

PorcFest this year was a blast, especially the roast of Stefan Molyneux (which was definitely rated R). Barring an invitation from Judge Napolitano to guest-host his show all week, I'll definitely be going to PorcFest 2012. For those who are broke but eager, there are all sorts of caravans being arranged on Facebook, and you can probably get free transportation if you offer to do some work upon arrival. See you in New Hampshire next year!