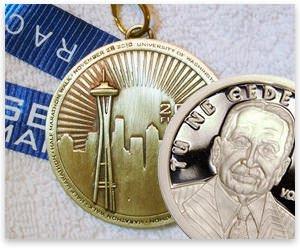 On November 28, I will attempt to run the Seattle Marathon. It's my first marathon, and I expect it will be one of the most difficult physical and mental challenges that I attempt in my life. For many, the mental challenge is as great as the physical. The months of training, the hundreds of miles run in preparation, and then the final hurdle of running 26 miles and 385 yards sometimes seem insuperable. In moments of extreme fatigue during training, I too have felt the enticing desire to just give up.

A common technique used by amateur runners to persevere through the mental struggle of running a marathon is dissociation — distracting oneself from fatigue and physical pain by focusing the mind on other things.1 One of the best means of dissociation is to run for a charitable cause, and here is mine. In 2006, according to USA Track and Field, runners participating in various long distance and track events raised more than $700 million for charities.2 Knowing that completing the marathon will support some greater good often provides enough inspiration for runners to push through exhaustion and moments of despair.

Earlier this year, one of my heroes, Lew Rockwell, exhorted an audience in Houston to take up the cause of liberty:

I challenge you to enter into the great struggle of history, and make sure that your days on this earth count for something truly important. It is this struggle that defines our contribution to this world. Freedom is the greatest gift that you can give yourself and all of humanity.3

To me there is no cause more worthy and no greater inspiration than the glorious cause of human freedom. And for this cause I cannot think of any greater champion than the Ludwig von Mises Institute, created in 1982 by Lew Rockwell as a research and educational center for classical liberalism and Austrian economics. The institute has a special place in my own heart, for without the vast library of historical and economic literature that it generously provides online for free I wouldn't have had the opportunity to pursue an independent education in economics.

The institute was named after Ludwig von Mises, arguably the most important economist of the 20th century, whose tremendous contributions to economics were not recognized in his own lifetime. The physical struggle one endures when attempting a marathon is a suitable metaphor for the mental struggle Mises faced during his prodigious career as an economist. His whole life he fought to uphold the principles of a free society in a world increasingly dominated by statist dogma, where adherence to the establishment's line of thinking was necessary for promotion and prominence. Mises's student Friedrich von Hayek later recounted the intellectual milieu of the early 20th century in a speech given to honor his teacher:

It was not easy. Professor Mises's teaching seemed directed against all we had been brought up to believe. It was a time when all the fashionable intellectual arguments seemed to point to socialism and when nearly all "good men" among the intellectuals were socialists.4

Despite the immense obstacles placed before him during his career, Mises never sacrificed his principles and he never wavered in his devotion to truth. Where others were overcome by adversity, Mises never gave up. In his tribute to Mises, Hayek continued,

You have shown an undaunted courage, even when you stood alone. You have shown a relentless consistency and persistence in your thought, even when it led to unpopularity and isolation. You have for long not found the recognition from the official organization of science which was your due. … But you have been more fortunate than most other sponsors of unpopular causes. You knew before today that the ideas for which you had so long fought alone or with little support would be victorious. … The torch which you have lighted has become the guide of a new movement for freedom which is gathering strength every day.

In running the Seattle Marathon, I will be grateful for even a modicum of the courage and determination that Mises displayed during his life. I hope that, in raising money for the Mises Institute by finishing the marathon, I will have enough inspiration to surmount the challenges I will face while running.

My aim is to raise $1,000 for every mile that I run ($26,220 total). To demonstrate my own commitment to the Mises Institute and to finishing the marathon, I will match every dollar donated up to $13,110 (half the total).5 If you are able to support my effort to complete the Seattle Marathon and to raise $26,220 for the Ludwig von Mises Insitute, please pledge by clicking here.

With your support and well wishes, I believe that I will be able to complete this challenge. I recognize, as I hope you do, that for freedom to triumph in our lifetime, we must heed the admonition of Ludwig von Mises:

No one can find a safe way out for himself if society is sweeping towards destruction. Therefore everyone, in his own interests, must thrust himself vigorously into the intellectual battle. None can stand aside with unconcern; the interests of everyone hang on the result.6

Vijay Boyapati is a former Google engineer. In 2007 he started Operation Live Free or Die, a grassroots organization to help Ron Paul's 2008 presidential campaign. Since 2009 he has devoted himself to studying Austrian economics.