GET NEWS AND ARTICLES IN YOUR INBOXPrint
A
A
Home | Mises Library | Janet Yellen, the "Pink Dream," and a Coming Economic Nightmare

Janet Yellen, the "Pink Dream," and a Coming Economic Nightmare 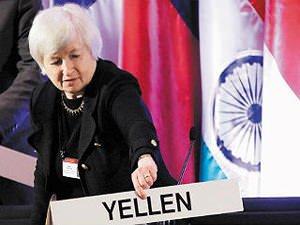 On Monday, former Fed official Andrew Huszar publicly apologized to the American public for his seminal role in executing the Quantitative Easing (QE) program, a program he characterizes as “the greatest backdoor Wall Street bailout of all time,” and “the largest financial-markets intervention by any government in world history.” While this is a momentous admission from an insider (Mr. Huszar is also a former Wall Street banker), perhaps Mr. Huszar’s most revealing statement concerned the results of QE’s “relentlessly pumping money into the financial markets during the past five years.” He referred to the spectacular rally in financial markets and expressed agreement with the growing belief among expert observers that market conditions had become “bubble-like.”

In a paper just released by the American Enterprise Institute, another former policymaker, resident fellow Desmond Lachman, formerly deputy director of the International Monetary Fund’s Policy Development and Review Department, warns that QE and other “unorthodox monetary policies” are having “unintended consequences.” Among other consequences, Lachman sees signs of incipient bubbles forming throughout the world:

An important aim of the QE policies pursued in the United States, the United Kingdom, and Japan has been to encourage risk taking and to raise asset prices as the means to stimulate aggregate demand. The question that now needs to be asked is whether these policies may have given rise to excessive risk taking, overleveraging, and bubbles in asset and credit markets. In this context, one has to wonder whether historically low yields on junk bonds in the industrialized countries now understate the risk of owning those bonds. . . . One also has to wonder whether yields on sovereign bonds in the European periphery have become disassociated from those countries’ underlying economic fundamentals and whether global equity valuations have not become excessively rich.

The markets for gems and for collectibles have also become very frothy of late. Yesterday, new records were set for a gemstone and for an Andy Warhol piece of art sold at auction. The “Pink Dream,” is a 59.60 carat vivid pink diamond, which is the highest color grade for diamonds, and the purity of its crystals is ranked among the top 2 percent in the world. The record setting price was $83 million. Not coincidentally, the DJIA set an intraday record shortly before the auction. The new record price for the Andy Warhol piece was $105.4 million. The auction’s combined $199.5 million in revenues was also a record for Sotheby’s. During Sotheby’s Geneva fall auction season, records were also set for the prices of an orange diamond and a Rolex Daytona watch.

While the Austrian insight that super-accommodative Fed monetary policy may be causing a recurrence of asset bubbles is making headway in policy circles, it has not yet dawned on Janet Yellen. Nor is such an epiphany likely. Ms. Yellen wears the intellectual blinders of the mainstream macroeconomist which force her to focus narrowly on arbitrary and increasingly irrelevant statistical averages and aggregates like the CPI, the unemployment rate, and GDP and to ignore what is going on around her in real markets.

This was clearly revealed in remarks prepared for her confirmation hearing released yesterday. Ms. Yellen noted that the rate of increase in the CPI index was less than the Fed target of 2.00 percent and that the labor market and the economy were performing far short of their potential (based on the meaningless concept of “potential GDP”). She thus reiterated her commitment to continuing monetary accommodation and “unconventional policy tools such as asset purchases.” It is true that in her testimony before the Senate committee on Thursday she did concede that it is “important for the Fed to attempt to detect asset bubbles when they are forming.” However, she blithely dismissed concerns that recent record highs in asset markets reflected “bubble-like conditions.” With Ms. Yellen’s confirmation highly likely, we can look forward to the Fed blindly fueling asset bubbles to a fare-thee-well. With the financial system still on shaky ground, this will lead to another financial meltdown and a U.S. government takeover of the financial system, the likes of which will make the last Wall Street bailout appear to be a minor intervention.