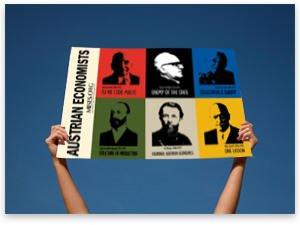 The Mises Institute is the nexus of the Austrian School. Years ago, few could have imagined such a wealth of information archived on a single website. Hundreds of books and scholarly journal articles, thousands of nonacademic articles, and a multitude of videos and audio media are stored online — all free of cost.

While even only a year ago students of economics would have to travel to study under their favorite economists, today the Mises Institute bridges this distance through the use of an interactive online classroom. To a significant degree, the Mises Institute — through the Internet — has broken the state's monopoly on education, allowing students worldwide to view global society through a different lens.

As great as the Mises Institute is, it is only as effective and strong as the number of people aware of its existence. Thus, the institute has gone through great strides to make its multimedia available through common search engines, and the wide proliferation of blogs has broadened the reach of the Misesian school. Awareness has also been enhanced thanks to the success of a number of best-selling Austrian books, including Tom Woods's Meltdown and Ron Paul's End the Fed — success driven in large part due to the spreading the word through the Internet and the ease of publishing positive reviews.

There is a method outside of the Internet and independent of publishing by which the Misesian message can be spread even further. This is nothing else than reverting to the old-fashioned reading group, or "meet up." While it may sound dull and inefficient to some, through hard work, dedication, and creativity, a reading group is a great way to maintain outreach to thousands of individuals in the locality where its meetings are held.

One such organization is the Monday Mises meet up, a weekly meeting at a local cafe in San Diego, California. Created and developed by the owners of Café Libertalia — Jesse Thomas and Donna Orlando — Monday Mises has become the Misesian oasis of San Diego County. Thanks to the efforts of these two owners, Monday Mises provides an excellent example of what can be achieved by individuals acting outside of the direct online presence of the Mises Institute.

The main purpose of the weekly meet up is to discuss a specified number of chapters of whichever book the group has decided to read. For example, a substantial portion of 2009 was spent reading and discussing Ludwig von Mises's Human Action. After completing Human Action, the group took on Murray Rothbard's Man, Economy, and State. Not only does this provide an incentive for a good number of people to become acquainted with these magna opera, but it also allows the readers to discuss the details of each chapter. The result is a much better understanding of the reading material.

The meet up does not appeal only to university students and professionals. Monday Mises has also shown segments of "Economics for High School Students," aiming to provide a younger generation with the Austrian perspective, even if only to balance against the economic theory taught at school. Those interested enough in the material go on to discuss Austrian economics with their peers and classmates.

Through online social media and even old fashion word-of-mouth, Monday Mises' crowd of active participants has slowly grown. But a simple membership count does not include the hundreds who are influenced when they are approached by active members, whether at the cafe, in class, or any other social engagement.

Cofounder Jesse is active in local government, partaking in city council meetings and political forums. While not necessarily looking to shape society through politics — otherwise known as coercion — Jesse successfully spreads the libertarian message to those who, perhaps, may have never heard it otherwise. While this probably brings about few positive short-term effects, the long-term influence this type of activism could have, on countless individuals, is incalculable.

Other members of the group, thanks to their reading of Austrian economics and libertarian political philosophy, now have a wealth of information to spread by writing letters to the editors of local, or even nationwide, publications. Many of the members are young university students, who also participate in libertarian clubs on the different campuses in San Diego — including the University of California, San Diego, San Diego State University, and the University of San Diego (which hosted Tom Woods, thanks to the efforts of the campus's student libertarian organization). This connection between the efforts of Monday Mises and campus libertarian clubs allows Austrian thought to spread to the next generation of Americans.

"To a significant degree, the Mises Institute — through the Internet — has broken the state's monopoly on education, allowing students worldwide to view global society through a different lens."

But reading is not the only activity practiced in Monday Mises. Members also watch videos and lectures, provided in large part by the Mises Institute. Attendees also have the opportunity to discuss libertarianism with like-minded individuals, which helps to share and strengthen ideas.

Not all libertarians are the same. The group enjoys an eclectic mix of anarchists and minarchists, sparking debates on the limits and extent of the state within libertarian thought. Monday Mises has also attracted other nonlibertarian attendees, including conservatives and "left liberals" (a generalization that includes socialists, social democrats, and progressives). Far from being a burden, this broad spectrum of ideology brings healthy debate and goes to show that these types of libertarian meet-up groups can effectively provide outreach to those who do not necessarily agree with the message. The key is in influencing others, and in this regard Monday Mises has done an outstanding job.

The reading group's interaction with nonlibertarians goes farther than discussions on the individual level. The two cofounders use the reading group as a springboard for the more ambitious project of hosting debates at Café Libertalia. The first such debate was the "Voluntaryists vs Socialists" debate, held between local, knowledgeable market anarchists — including Joey Hill, a former Mises University student — and a team of social democrat professors. Attended by at least sixty people, and viewed by hundreds on the web, the debate was an excellent method by which to test the rigidity of libertarian theory against opposing viewpoints. It also introduced libertarian theory to those who attended only to watch the opposing side.

In return, though admittedly for its own benefit (we do condone a capitalist society, after all!), Monday Mises coordinates attendance of San Diegans to Mises Institute events. One such event was "Economic Downturns," held at Newport Beach. Another event that members of Monday Mises plan to attend is "Freedom Fest," in Las Vegas, which the Mises Institute will form part of.

Conveniently, the fact that the group's cofounders also own the cafe that hosts the weekly meet up means that they can easily spread the institute's various publications to customers. As such, any client drinking coffee, or using the cafe's computers, is exposed to the writing in the Free Market, Mises Daily and other literature downloaded from Mises.org's archives. Group members, including cofounder Jesse, vigorously spread these publications at public events, influencing people outside of the meet up.

In an effort to further the movement for liberty by making Café Libertalia a local haven for libertarians, Jesse and Donna have begun planning their most ambitious effort yet. This is nothing less than a privately owned libertarian library, organized within the walls of the cafe. Local students of Austrian and libertarian theory currently have access to digital files through the website, or they can outright buy books. Jesse and Donna's plan for a private Misesian library would mean that those interested would have physical books at their disposal for reading at the cafe (or for purchase at a reasonable price). Over the long term, the library would hold books on a wide array of topics, ranging from economics to philosophy.

But a local "freedom library" is but a kernel of Jesse and Donna's vision. Using these books and the huge number of resources available online, Café Libertalia would turn into a learning center in its own right. Students of varying ages could come for lectures on Austrian economics and libertarian political theory, offering them a curriculum otherwise unavailable.

A lively program like this would also be bound to activate interest in similar methods of teaching libertarianism in local high schools and colleges. In fact, it would not be inconceivable to find some way of coordinating local students with the Mises Institutes's online academy — such is the beauty of entrepreneurship, where possibilities are bound only by the limits of human creativity.

The advent of the Internet, with the development of easily accessible websites and online forums, seemed to have made the old-fashioned meet up obsolete. The truth is that meet ups, such as reading groups, are still very relevant, especially if they take advantage of what websites like Mises.org can offer regarding literature and media. In fact, the two can work together. Reading groups can use Mises.org to provide most of the necessary resources free of charge — or at worst for relatively little cost — while they spread libertarianism to people that would have otherwise not stumbled upon it by surfing the Internet.

Monday Mises is only one such example. San Diego enjoys quite a few of these meet ups: both the University of California, San Diego and the University of San Diego host "Young Americans for Liberty" libertarian clubs, for example. The great thing is that these groups can interact and cooperate, and the result is countywide outreach.

There are, of course, an array of personal benefits an individual would enjoy by starting such a group, or taking part in an existing organization. Not only does one get to meet like-minded individuals, but one also benefits from intellectually stimulating conversation. Thus, while the old-fashioned reading group is an effective method by which to spread liberty, it is also highly enjoyable.