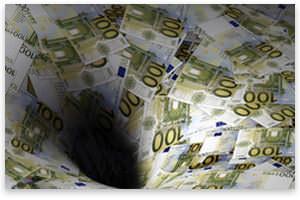 On Monday, May 10, eurozone officials presented a stimulus plan involving $1 trillion. The main reason for the package, as stated by officials, is to prevent European economies from falling into an economic black hole on account of the economic crisis in Greece.

Another factor that prompted the European leaders to come up with the massive stimulus package is the desire to arrest the slide of the euro. After climbing to $1.51 in November 2009 the price of the euro in US dollar terms plunged to around $1.26 in early May — a fall of 16%.

There is a concern that an uncontrolled fall in the euro could accelerate the rate of increase in price inflation. Note that after falling to −0.3% in September last year, the yearly rate of growth of the consumer price index (CPI) jumped to 1.5% in April.

The stated intent of eurozone leaders to defend the euro at any price seems to be contradictory given that the European Central Bank (ECB) on May 10 started pumping money into the economy by buying government bonds on the secondary market. Observe that the growth momentum of the ECB balance sheet has been trending up since January this year. The yearly rate of growth climbed from −6.8% in January to 11.5% in the first week of May.

Eurozone policy makers were quick to suggest that the ECB monetary pumping via the purchase of government bonds of weak economies such as Greece, Portugal, and Spain is meant to stabilize financial markets.

Trying to suppress the symptoms without addressing the causes behind the widening in the spread can only make things much worse. Clearly, investors are now assigning a much greater risk to Greek versus German government bonds given the fact that the Greek economy is in much worse shape.

Eurozone policy makers have also suggested that this pumping is not inflationary because it will be neutralized by an appropriate monetary policy of the ECB — the monetary pumping by the ECB is not going to lift the money-supply rate of growth, it is held.

Irrespective of these statements, what matters is what the ECB balance sheet is doing — as we have seen, it has been on a rising growth path since January this year.

Given the widening yield spread, clearly — it is held — we have a strong increase in the demand for money. Failing to accommodate this demand, it is argued, can seriously damage the monetary system.

Regardless of demand, any monetary pumping sooner or later will lead to an exchange of nothing for something, which will weaken the real-wealth-generation process.

Now, can the $1-trillion package fix the underlying problems of Greece and other eurozone economies? I.e., can it improve the ability of some European governments to service their debt?

Another important factor that undermines this process is the reckless monetary policy of the ECB.

What we currently observe in Greece and other European economies is an economic bust brought about by a visible decline in the growth momentum of the money supply.

While a fall in the growth momentum of money is good news for the wealth-generating process, ever-growing government activities have continued to undermine this process.

The relentless increases in government outlays implies a persistent diversion of real savings from wealth-generating activities to nonproductive activities, i.e., consumption of real capital. Obviously, this undermines the process of real-wealth generation.

On Monday, May 10, eurozone officials presented a $1-trillion stimulus plan to prevent the eurozone economies falling into an economic black hole. To reinforce the plan, the European Central Bank (ECB) was forced by eurozone officials to step in with monetary pumping to provide a quick fix to financial markets. Such policies can only make things much worse — it is not possible to create something by printing money and redistributing real wealth. All that such policies produce is a further economic impoverishment.