GET NEWS AND ARTICLES IN YOUR INBOXPrint
A
A
Home | Mises Library | End This Nonsense Now! 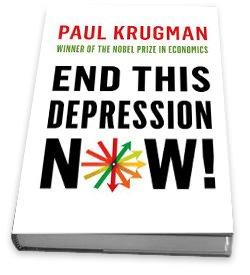 Supporters of Keynesian economics sometimes claim it to be a crude caricature of the Master that he thought the government has only to spend more money to get us out of a depression and that getting us into debt doesn't matter because we owe it to ourselves. Keynes, it is alleged, was a vastly more sophisticated thinker than this caricature portrays him to be. These defenders may find End This Depression Now! disconcerting. Krugman, who whatever his faults certainly is not lacking in technical sophistication, defends pretty much the cartoon version of Keynesianism that we are told is oversimplified.

He makes unmistakably clear the lesson he intends to convey: the government needs to spend a great deal of money to extricate us from our depressed economic conditions.

But the essential point is that what we really need to get out of this current depression is another burst of government spending. Is it really that simple? Would it really be that easy? Basically, yes. (p. 39)

To those who worry that spending on the scale he has in mind would add to the already huge government deficit, he says,

It's true that people like me believe that the depression we're in was in large part caused by the buildup of household debt, which set the stage for a [Hyman] Minsky moment in which highly indebted households were forced to slash their spending. How, then, can even more debt be part of the appropriate policy response? The key point is that this argument against deficit spending assumes, implicitly, that debt is debt — that it doesn't matter who owes the money. Yet that can't be right; if it were, we wouldn't have a problem in the first place. After all, to a first approximation debt is money we owe to ourselves; yes, the United States has debt to China and other countries, but … our net debt to foreigners is relatively small and not the heart of the problem. (p. 146)

Why does Krugman favor increased government spending? After the collapse of the housing market and the bank and investment house failures that accompanied this collapse, consumers' spending fell. Faced with the prospect of diminished spending by consumers, investors were reluctant to invest. Unless the government acted, the economy threatened to spiral downward. Government aid programs and actions by the Fed prevented total collapse, but spending has not been sufficient. The government needs to do more. "Why is unemployment so high, and economic output so low? Because we — where by 'we' I mean consumers, businesses, and governments combined — aren't spending enough" (p. 24).

One might at first object to Krugman's argument in this way. If the government spends more but does not increase the supply of money, must it not be the case that someone else has spent less money? In this view, there cannot be an overall failure of demand. More of particular goods can be produced than people want at the price they are offered for sale, but there cannot be general overproduction.

Krugman rejects this counterposition. "This is the fallacy Keynes called 'Say's Law'" (p. 25).

What is wrong with Say's law, in brief, is that money need not be either spent or invested. People can hoard money; and, if they do so, a failure in total demand can indeed result. Surprisingly, he does not offer a detailed account of how hoarding produces this failure in total demand. "You can write down a little mathematical model to illustrate the issues, but this works only with economists, not with normal human beings (and it doesn't even work with some economists)" (p. 26). Instead, he supports his criticism of Say's law with a story that he has already used in his The Return of Depression Economics. The story is about a babysitting cooperative, the members of which find themselves at cross-purposes.

I do not propose to rehearse here the details of Krugman's babysitting example and its relevance to the case of economic depression.1 Let us instead look at the Keynesian analysis directly. Does it rest on plausible assumptions? What evidence supports it?

It will come as no surprise to readers that the Keynesian account strikes me as unpersuasive. For one thing, as Krugman himself acknowledges, the depression starts with the collapse of particular markets such as housing. If this is so, why are investors supposed to fear a general fall in future consumer demand? Is not the problem rather that there has been malinvestment in specific areas? The solution would then be to shift resources away from these areas into others. So long as this is done, why would businessmen refuse to invest?

Krugman is aware of this response, but he believes it is just what we need to avoid. He cites Joseph Schumpeter, who warned against policies of government stimulus to end depressions. Instead, bad investments should be left to fail:

For any revival which is merely due to artificial stimulus leaves part of the work of depressions undone and adds, to an undigested remnant of maladjustment, new maladjustment of its own which has to be liquidated in turn, thus threatening business with another crisis ahead. (p. 204, quoting Schumpeter)

Krugman does not tell us what is wrong with Schumpeter's reasoning. Instead, he takes for granted that investors in a depression expect a general collapse in consumers' demand.

But suppose, contrary to fact, that investors did expect a general fall in consumer demand. Would it follow that investment would stop, miring the economy in continuing depression? By no means. As Friedrich Hayek noted long ago, investment in a business can be profitable even if demand for the product of the industry has fallen. What concerns the businessman is not the quantity of his product that buyers demand at a given price, considered in isolation, but rather that amount compared with his costs. If his costs have also fallen, why cannot investment continue?

As it is not the absolute level of the prices of the product, but only their relative level in comparison with factor prices which determines the remunerativeness of production, it is, therefore, never the absolute size of the demand for consumption goods, but the relative size of the demands for the means of production to be used for the various methods of producing consumption goods that determines this relative profitableness.2

Krugman might respond to our objections in this way: "You may cavil at various details of Keynes, but the evidence demonstrates that he is right. Government spending does indeed revive prosperity and create jobs."

Does not this response ignore the obvious? The government under Bush and Obama has spent a great deal of money; but, on Krugman's own showing, the economy has failed fully to recover. Does this not give us some reason to think that the Keynesian prescription is inadequate? Krugman does not think so. He says the problem with current American policy is that the government has not spent enough. Further, he says, he does not here speak with the wisdom of hindsight. He warned long ago that the amount of money the government proposed to spend would not suffice to bring about recovery.

I personally was more or less tearing my hair out in public as the shape of the [Obama] administration's plan began to come clear.… I feared that an inadequate stimulus would both fail to produce adequate recovery and undermine the political case for further action. (p. 119)

In cases where a correlation exists between government spending and increases in employment, he awards full marks to Keynes:

As military spending [in 1940] created jobs and family incomes rose, consumer spending also picked up (it would eventually be restrained by rationing, but that came later). As businesses saw their sales growing, they also responded by ramping up spending. And just like that, the Depression was over. (p. 39)3

Krugman does not so much as mention the pioneering work of Robert Higgs, Depression, War, and Cold War, which decisively challenges the contention that World War II ended the Great Depression. Higgs convincingly shows that prosperity returned only after the war ended. But let us, very much contrary to fact, suppose that Krugman is correct about the effects of government spending in the years after 1940. His defense of Keynes would still be grossly deficient.

What he is in effect saying is this: "Instances that appear to confirm the claim that government spending ends depressions count in favor of Keynes. But cases that go against Keynes do not count, because we cannot rule out the possibility that greater spending would have worked."

What Keynes's friend Piero Sraffa, who cannot be suspected of bias in favor of the Austrian School, wrote in his copy of Keynes's General Theory applies to Krugman as well: "as usual, heads I win, tails you lose."4

One passage in the book is unintentionally revealing. Given Krugman's stress on the importance of propping up investment through government stimulus, one might have expected him to favor measures to boost business confidence. Instead, he cites with approval the Polish Marxist Michal Kalecki, who warned that appeals to business confidence were an instrument by which the capitalist class endeavored to control policy. Government should not placate business but instead control the economy directly:

Every widening of state activity is looked upon by business with suspicion, but the creation of employment by government spending has a special aspect which makes the opposition particularly intense. Under a laissez-faire system the level of employment depends to a great extent on the so-called state of confidence.… This gives the capitalists a powerful indirect control over government policy; everything which may shake the state of confidence must be carefully avoided because it would cause an economic crisis. But once the government learns the trick of increasing employment by its own purchases, this powerful controlling device loses its effectiveness. (pp. 94–5, quoting Kalecki)

Krugman remarks, "This sounded a bit extreme to me the first time I read it, but it now seems all too plausible" (p. 95).

Krugman yearns for the glory that was Roosevelt and the grandeur that was Truman, but he evidently thinks that their revolution against capitalism needs to proceed further.

Krugman has nothing to say about the Austrian theory of the business cycle. Hayek is mentioned once (p. 205) in connection with the passage from Schumpeter previously quoted, but his name does not appear in the book's index. Mises and Rothbard are not mentioned at all. Given his manifest lack of understanding of the Austrian theory in earlier work, this is just as well.5