GET NEWS AND ARTICLES IN YOUR INBOXPrint
A
A
Home | Mises Library | Hangover Theory: How Paul Krugman Has Misconceived Austrian Theory 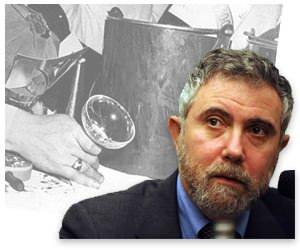 Tags The FedInterventionismPhilosophy and Methodology

07/31/2009David Gordon
Paul Krugman is an eminent economist, but he here reveals a woefully inadequate understanding of Austrian business-cycle theory. The rudiments of the theory are easy; one might have thought that even a Keynesian could grasp them.

According to Mises and Hayek, an expansion in bank credit pushes the money rate of interest below the "natural" rate. People prefer goods in the present to the same goods in the future, a matter obvious to anyone except for a few philosophers. The rate at which people favor the present, in the Austrian view, chiefly determines the rate of interest.

As just suggested, though, an increase in bank credit plays havoc with the process of setting the interest rate. Since more money is available, the price of money goes down. Investors, faced with lower interest rates, increase their investments in higher stages of production. Unfortunately, those investments eventually collapse. Because the "natural rate" — the rate of time preference — has not changed, consumers do not want the shift to investment goods that has taken place. Hence, these investments must be liquidated, and the boom collapses.

Krugman never comes to grips with this account. Instead, he subsumes it under the more general category of the "hangover theory":

In the beginning, an investment boom gets out of hand. Maybe excessive money creation or reckless bank lending drives it. Maybe it is simply a matter of irrational exuberance on the part of entrepreneurs. Whatever the reason, all that investment leads to the creation of too much capacity.... Eventually, however, reality strikes — investors go bust and investment spending collapses. The result is a slump whose depth is in proportion to the previous excesses.

To Austrians, of course, "whatever the reason" does not adequately portray their theory of the slump. Our confidence in Professor Krugman as an expositor of Austrian theory does not increase when we note his continual citation of "Hayek and Schumpeter," instead of "Mises and Hayek," as proponents of the theory. Although Schumpter was an economist from Austria, his theory of the business cycle differs entirely from the Mises-Hayek account.

Even if Professor Krugman's grasp of the details of Austrian theory is hazy, perhaps his objections have merit. Maybe Austrians fall before our author's assault on the hangover theory. What, then, are these objections?

Professor Krugman thinks that the hangover theory "is not a bad story about investment cycles." But it doesn't explain depressions. Why should a collapse in the investment market wreck the whole economy?

As a matter of simple arithmetic, total spending in the economy is necessarily equal to total income. Every sale is also a purchase, and vice-versa. So if people decide to spend less on investment goods, doesn't that mean that they must be deciding to spend more on consumption goods implying that an investment slump should always be accompanied by a corresponding consumption boom? And if so why should there be a rise in unemployment?

Did you spot the fallacy? When the investment boom collapses, people may shift spending to consumer goods. It doesn't at all follow, though, that a boom in consumption goods will result. A consumption boom, one presumes, means an increase in the quantity of consumer's goods; and no reason has been advanced to expect such an increase. All we have been given is that spending on consumer goods has increased. This may well simply increase the prices of these goods rather than expand production.

But there is another path that economic downturns frequently take. The investment boom might not be replaced by an increase in consumer spending. Rather, the bust can be accompanied by a monetary contraction (a "credit crunch") that causes the investment boom not to shift but simply to disappear. This occurs by a reversal of the process by which bank credit was created in the first place. But because Krugman is disinclined to think about processes at all, this alternative does not occur to him.

Our author introduces a false issue by bringing in unemployment. It is not at all part of the Mises-Hayek view that liquidating malinvestments caused by overexpansion of bank credit requires mass unemployment. Quite the contrary, unemployment, as Austrians see matters, stems mainly from rigid wage rates. If workers accept a fall in wages, liquidation of the boom is compatible with full employment.

Professor Krugman's assault on Austrian theory has not yet ended. If the Austrians misdiagnose the cause of depressions, they also offer the wrong remedy. Austrians suggest that during a slump, the government should stay out of things (hasn't it done enough damage by expanding bank credit?). The "slump is part of the necessary healing process. The excess capacity gets worked off, prices and wages fall from their excessive boom levels, and only then is the economy ready to recover."

To Professor Krugman, this is a counsel of despair. It reflects a moralistic position: since overexpansion is "bad," people must suffer the condign consequences of their misbehavior. Instead, the good professor proposes, a freewheeling policy should be adopted. Why not expand the money supply and avoid depression altogether?

Once more, Professor Krugman has misconceived Austrian theory. An expansion of the money supply will cause discoordination, in the way that Mises, Hayek, and Rothbard have patiently explained — and Krugman has ignored. And if expansion proceeds by means of more bank credit, the upshot will be renewed malinvestment. To oppose monetary expansion is not moralism but simple common sense.

This review was originally published in Slate, December 3, 1998.