GET NEWS AND ARTICLES IN YOUR INBOXPrint
A
A
Home | Mises Library | Drowning in a Liquidity Trap?

Drowning in a Liquidity Trap?

Bruce Bartlett recently lamented in The New York Times that given the current state of economic affairs we need more Keynesian medicine to fix the US economy. According to Bartlett, the core insight of Keynesian economics is that there are very special economic circumstances in which the general rules of economics don’t apply and are in fact counterproductive. This happens when interest rates and inflation rates are so low that monetary policy becomes impotent; an increase in the money supply has no boosting effect because it does not lead to additional spending by consumers or businesses. Keynes called this situation a “liquidity trap.” Keynes wrote,

Under such circumstances government spending can be highly stimulative, because it causes money that is sitting idle in bank reserves or savings accounts to circulate and become mobilized through consumption or investment. Thus monetary policy becomes effective once again.

Bartlett regards this as an extremely important insight that policy makers have yet to grasp. According to our columnist, despite massive monetary pumping by the Fed since 2008, it has produced very little boosting effect on the economy. The Fed’s balance sheet jumped from $0.897 trillion in January 2008 to $3.3 trillion in early May 2013. The Federal Funds Rate target stood at 0.25 percent in early May against 3 percent in January 2008. 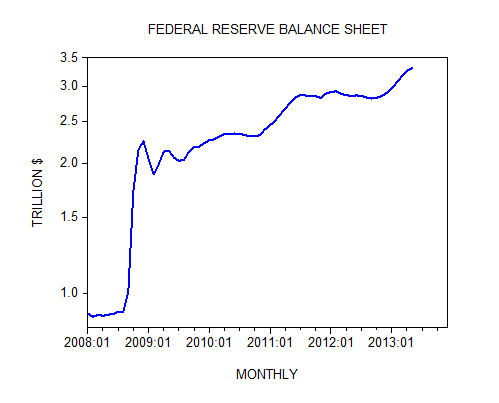 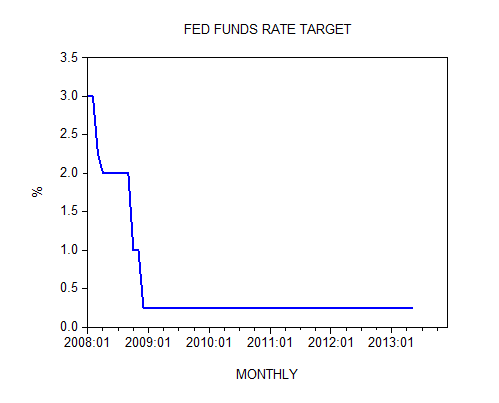 In normal times, one would expect such an increase in the money supply to be highly inflationary and sharply raise market interest rates. That this has not happened is proof that we have been in a liquidity trap for several years. We needed a lot more government spending than we got to get the economy out of its doldrums.

Note also that Nobel Laureate in economics Paul Krugman holds similar views. For them what is needed is a re-activation of the monetary flow that somehow got stockpiled in the banking system. Observe that in the Keynesian framework the ever-expanding monetary flow is the key to economic prosperity. What drives economic growth is monetary expenditure.

Why is money not the driver of economic growth?

Contrary to popular thinking, monetary flow has nothing to do with economic growth as such. Money is simply a medium of exchange and nothing more than that. Also, note that people don’t ultimately pay for goods and services with money, but rather with the goods and services that they have produced.

Again, money is just employed to exchange goods and services. Being the medium of exchange, money can only assist in exchanging the goods of one producer for the goods of another producer.

What drives economic growth is savings that are used to fund the increase and the enhancement of tools and machinery, i.e., capital goods or the infrastructure that permits the increase in final goods and services: real wealth to support the lives and well being of people.

Contrary to popular thinking, an increase in the monetary flow is in fact detrimental to economic growth since it sets in motion an exchange of something for nothing — it leads to the diversion of real wealth from wealth generators to wealth consumers. This in the process reduces the amount of wealth at the disposal of wealth generators thereby diminishing their ability to enhance and maintain the infrastructure. This in turn undermines the ability to grow the economy.

What is behind the so called liquidity trap?

The fact that so far the Fed’s massive pumping has not resulted in a massive monetary flood should be regarded as good news. If all that new money were to enter the economy, it would have entirely decimated the machinery of wealth generation and produced massive economic impoverishment.

It seems that market forces have so far managed to withstand the onslaught by the US central bank. What allowed this resistance is not some kind of ideology against aggressive pumping by the Fed (in fact most experts and commentators are of the view that the Fed should create a lot of money in difficult times), but the fact that the process of real wealth generation has been severely damaged by the previous loose monetary policies of Greenspan’s and Bernanke’s Fed.

The badly damaged process of wealth generation has severely impaired true economic growth, and obviously this has severely reduced good quality borrowers and subsequently has reduced banks willingness to lend. Remember that in essence banks actually lend real wealth by means of money. They are just intermediaries. Obviously then, if wealth formation is being impaired, less lending can be done. We suggest that it is this fact alone that explains why all the pumping by the Fed has ended up stacked in the banking system. So far in early May banks have been sitting on over $1.7 trillion in surplus cash. In January 2008 surplus cash stood at $2.4 billion. 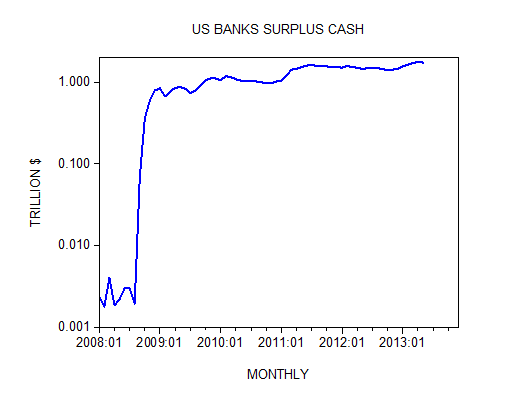 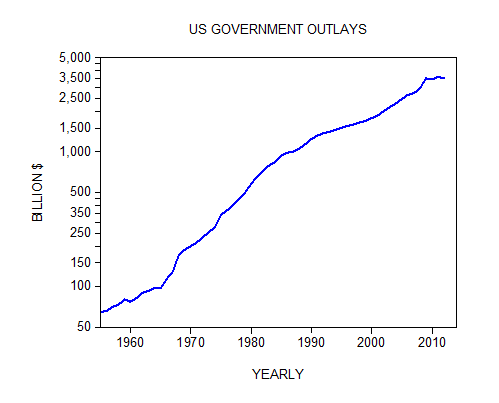 Remember government is not a wealth-generating entity, so in this sense increases in government spending generate the same damaging effect as monetary printing does; it leads to the diversion of wealth from wealth generators to wealth consumers. Observe that in 2012, US government outlays stood at $3.538 trillion, an increase of 98 percent from 2000.

As long as the rate of growth of the pool of real wealth stays positive, this can continue to sustain productive and nonproductive activities.

Trouble erupts, however, when, on account of loose monetary and fiscal policies, a structure of production emerges that ties up much more wealth than the amount it releases.

This excessive consumption relative to the production of wealth leads to a decline in the pool of wealth.

This in turn weakens the support for economic activities, resulting in the economy plunging into a slump. The shrinking pool of real wealth exposes the commonly accepted fallacy that loose monetary and fiscal policies can grow the economy.

Needless to say, once the economy falls into a recession because of a shrinking pool of real wealth, any government or central-bank attempts to revive the economy must fail.

This means that a policy such as lifting government outlays to counter the liquidity trap will make things much worse.

Not only will these attempts not revive the economy; they will deplete the pool of real wealth further, thereby prolonging the economic slump.

Likewise any policy that forces banks to expand lending “out of thin air” will further damage the pool and will further reduce banks’ ability to lend.

Again the foundation of lending is real wealth and not money as such. It is real wealth that imposes restrictions on banks’ ability to lend. (Money is just the medium of exchange, which facilitates the flow of real wealth.)

Note that without an expanding pool of real wealth, any expansion of bank lending is going to lift banks’ non-performing assets.

Contrary to various experts, we suggest that in the current economic climate an increase in government outlays is not going to make Fed’s loose monetary policies more effective as far as boosting economic activity is concerned.

On the contrary, it will weaken the process of wealth generation and will retard economic growth.

What is needed to get the economy going is to close all loopholes for money creation and drastically curtail government outlays.

This will leave a greater amount of wealth in the hands of wealth generators and will boost their ability to grow the economy.