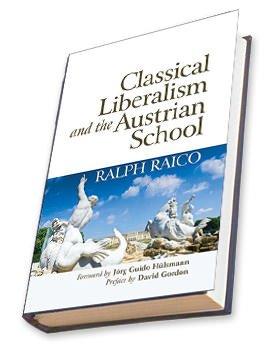 History looks backward into the past, but the lesson it teaches concerns things to come. It does not teach indolent quietism; it rouses man to emulate the deeds of earlier generations." – Ludwig von Mises1

The present book contains a collection of essays written throughout the past 20 years. I read virtually all of them when they were first published. They have been a central part of my education in the history of liberalism and of the Austrian School of economics, and I consider myself privileged indeed to have encountered Professor Raico and his work early on in my intellectual development.

Raico's profound and extensive knowledge of intellectual, political, and economic history are evident in each of the following essays and, in fact, virtually on each page of this book. His readers will also appreciate the warm passion he brings to the study of his subject, as well as his dry wit. Drawing from original sources in German, French, and Italian, as well as English, Professor Raico provides us with original scholarship on the history of liberalism from a decidedly liberal, though not exclusively Anglo-Saxon perspective. What is more, he definitely has the talent to rouse his readers to emulate the deeds of earlier generations.

It was through Raico's book Die Partei der Freiheit (The Party of Freedom)2 that I and many other Germans first heard of Eugen Richter, the champion of true liberalism in fin-de-siècle Germany. Forgotten by virtually everyone except for his social-democratic detractors, Richter has made a comeback in the past ten years and some of his major writings are again in print. Today his words and deeds inspire a new generation of intellectuals and politicians. Thank you for that lesson, Professor Raico! If Germany returns to the tradition of true liberalism, we shall have in Berlin a Raico Straße leading to the Richter Platz.

Ralph Raico's scholarship did not just appear out of the blue sky. It is the fruit of hard work, and it is also based on the work of predecessors and contemporaries. Ralph Raico adds to the legacy of his mentor, Ludwig von Mises, who was himself a distinguished historian and to whose memory the present volume is dedicated. They first met when Raico was still a high-school student in the early 1950s and when, despite his young age, he was admitted to Mises's NYU seminar. There he met Murray Rothbard and many other young intellectuals who in the decades to come would turn into pillars of true liberalism.

In the Mises seminar these young men would receive a lesson on the meaning of scholarship. A scholar is not a living inventory of a great number of loosely connected facts, or the crafty technician of some sophisticated method of research, or a member of "the order of discourse" (Foucault) whose main ability is to handle the abstract language of an intellectual sect.

A scholar definitely is a master of the nuts and bolts. He is perfectly familiar with all the relevant facts and methods, and he is conversant even with the latest fads of terminology. But, more than that, he truly penetrates his subject. He can explain his facts in terms of cause and consequence rather than merely juxtaposing them. He sees through terminological fads and writes in an unpretentious style, because he does not seek to impress but to transmit. And he is able to transcend the necessarily narrow realm of any scientific investigation. He is able to put the concrete subjects of his field, and the field itself, into proper context and perspective. He is able to open horizons.

These are the marks of scholarship that we find in the works of Ludwig von Mises and of Murray Rothbard. These are also the marks that we find on the following pages. Professor Raico covers all aspects of his field: deeds, persons, and ideas. But he is not just a historian but a great educator within a great tradition.