According to bureaucrats at the Paris-based Organization for Economic Cooperation and Development, so-called tax havens are terrible and should be shut down. Their position is grossly hypocritical since they get tax-free salaries while pushing for higher taxes on everyone else, but not very surprising since the OECD’s membership is dominated by increasingly uncompetitive European welfare states.

Many economists, by contrast, view tax havens favorably since they discourage politicians from over-taxing and over-spending (thus protecting nations from “goldfish government“).

I agree with this economic argument for tax havens, but I also think there’s a very strong moral argument for these jurisdictions since there are so many evil and incompetent governments in the world.

But I don’t want to rehash the argument about the desirability of tax havens in this column. Instead, we’re going to focus on a nation that is becoming the world’s premier “offshore” center.

But it’s not a Caribbean island or a micro-state in Europe.

Instead, as noted in a recent Bloomberg editorial, the United States is now the magnet for global investment.

…the U.S. is becoming one of the world’s best places to hide money from the tax collector. …Congress rejected the Obama administration’s repeated requests to make the necessary changes to the tax code. As a result, the Treasury cannot compel U.S. banks to reveal information such as account balances and names of beneficial owners. The U.S. has also failed to adopt the so-called Common Reporting Standard, a global agreement under which more than 100 countries will automatically provide each other with even more data than FATCA requires. …the U.S. is rapidly becoming the new Switzerland. Financial institutions catering to the global elite, such as Rothschild & Co. and Trident Trust Co., have moved accounts from offshore havens to Nevada, Wyoming and South Dakota. New York lawyers are actively marketing the country as a place to park assets. …From a certain perspective, all this might look pretty smart: Shut down foreign tax havens and then steal their business.

The Economist also identified the U.S. as a haven.

America seems not to feel bound by the global rules being crafted as a result of its own war on tax-dodging. It is also failing to tackle the anonymous shell companies often used to hide money. …All this adds up to “another example of how the US has elevated exceptionalism to a constitutional principle,” says Richard Hay of Stikeman Elliott, a law firm. …America sees no need to join the CRS. …reciprocation is patchy. It passes on names and interest earned, but not account balances; it does not look through the corporate structures that own many bank accounts to reveal the true “beneficial” owner; and data are only shared with countries that meet a host of privacy and technical standards. That excludes many non-European countries. …The Treasury wants more data-swapping and corporate transparency, and has made several proposals to bring America up to the level of the CRS. But most need congressional approval, and politicians are in no rush to enact them. …Meanwhile business lobbyists and states with lots of registered firms, led by Delaware, have long stymied proposed federal legislation that would require more openness in corporate ownership. (Incorporation is a state matter, not a federal one.) …America is much safer for legally earned wealth that is evading taxes… It has shown little appetite for helping enforce foreign tax laws.

And here are some passages from a recent column in Forbes.

…foreign financial institutions are required to report the identities and assets of United States taxpayers to the IRS. Meanwhile, U.S. financial institutions cannot be compelled to reveal the same information to foreign countries. Additionally, the United States has not adopted the Common Reporting Standard. …So, the United States government obtains tax and wealth information from other countries, but fails to share information about what occurs in the U.S. with those other counties. …the U.S. is among the top five best countries for setting up anonymous shell companies. Tax havens deliver a set of benefits including secrecy, potential tax minimization, and the ability of the wealthy to access their monies from anywhere in the world. For a substantial percentage of the global super-rich, the United States is regularly unmatched.

Here’s some of what was reported by the U.K.-based Financial Times.

South Dakota is best known for its vast stretches of flat land and the Mount Rushmore monument… Yet despite its small town feel, Sioux Falls has become a magnet for the ultra-wealthy who set up trusts to protect their fortunes from taxes… Assets held in South Dakotan trusts have grown from $32.8bn in 2006 to more than $226bn in 2014, according to the state’s division of banking. The number of trust companies has jumped from 20 in 2006 to 86 this year. The state’s role as a prairie tax haven has gained unwanted attention… The Boston Consulting Group estimates that there is $800bn of offshore wealth in the US, nearly half of which comes from Latin America. …Bruce Zagaris, a Washington-based lawyer at Berliner, Corcoran & Rowe, says the US offshore industry is even bigger than people realise. “I think the US is already the world’s largest offshore centre. It has done a real good job disabling competition from Swiss banks.”

If this sounds like the United States is hypocritical, that’s a very fair accusation.

Indeed, it was the topic of an entire panel at an Offshore Alert conference. If you have a lot of interest in this topic, here’s the video.

This is an odd issue where I agree with statists (though only with regard to which jurisdictions are “havens”). For instance, the hard-left Tax Justice Network has calculated that the United States is not the biggest offshore jurisdiction. But America is close to the top.

In the TJN’s most-recent Financial Secrecy Index, the United States ranks #2. They think that’s a bad thing (indeed, one of their top people actually asserted that all income belongs to the government), but I’m happy we’ve risen in the rankings. 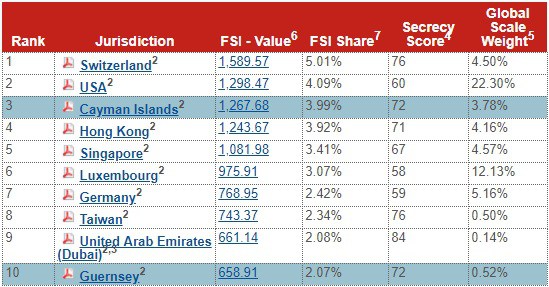 TJN also has specific details about U.S. law and I think they’ve put together a reasonably accurate summary.

The bottom line is that America is a haven, though it’s probably worth noting that we’ve risen in the rankings mostly because other nations have been coerced into weakening their human rights laws on financial privacy, not because the United States has improved.

At the risk of pointing out the obvious, TJN and I part ways on whether it’s good for the United States to be a tax haven.

I already explained at the start of this column why I like tax havens and tax competition. Simply stated, it’s good for taxpayers and the global economy when governments are forced to compete.

But there’s also a good-for-America argument. Here’s the data from the Commerce Department’s Bureau of Economic Analysis on indirect investment in the U.S. economy. As you can see, cross-border flows of passive investment have skyrocketed. It’s unknown how much of this increase is due to overall globalization and how much is the result of America’s favorable tax and privacy rules for foreigners. 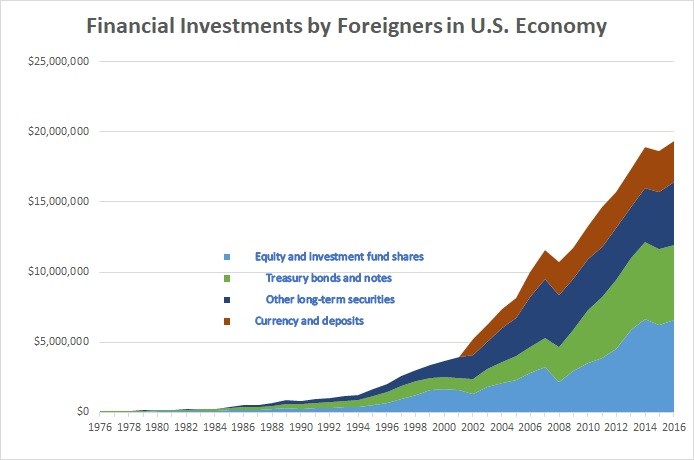 But there’s no question the U.S. economy benefits enormously from foreigners choosing to invest in America.

All of which helps to explain why it would be a big mistake for the United States to ratify the OECD’s Multilateral Convention on Mutual Administrative Assistance in Tax Matters.

Unless, of course, one thinks it would be good to undermine American competitiveness by creating a global tax cartel to enable bigger government.

P.P.S. The TJN folks and OECD bureaucrats claim that their goal is to reduce tax evasion. My response is that a global tax cartel is a destructive way of achieving that goal. There’s a much better option available.

P.P.P.S. Rand Paul is one of the few heroes on this issue.