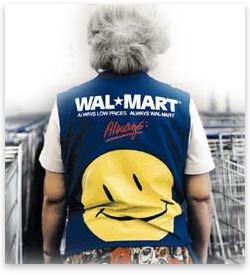 06/22/2011Robert P. Murphy
"If employees are being systematically
underpaid in a firm, there is an automatic
incentive for other companies to bid them away."

Earlier this week, the Supreme Court unanimously threw out a massive class-action sexual-discrimination lawsuit against Walmart. By overruling a lower court's decision, the Supreme Court raised the barrier to future legal challenges against large corporations. As might be expected, probusiness outlets defended the ruling, while advocates for women and minorities lamented it.

In the present article I won't discuss the specific legalities of the case, as I'm not a lawyer. Rather, I will argue that standard libertarian theory says that there should be no such things as laws against "discrimination," because they are illegitimate infringements on property rights. Furthermore, in practice such laws are completely arbitrary, as it's impossible to actually avoid discrimination. The free market provides the built-in penalties for practices that most people have in mind when they want the government to punish "discriminatory behavior."

The standard libertarian objection to "antidiscrimination" legislation is that it infringes on the exercise of property rights. If you own a business, you should have the legal ability to hire whomever you want.

The principle is straightforward enough when it comes to property rights in a personal setting. For example, even people who support laws against business discrimination would probably shrink from saying that (say) a racist homeowner has to invite black people to his barbecue on the Fourth of July. Most people are content to say that the homeowner is a jerk and should be shunned by polite society, but his house is his property, and the government can't literally force him to host people against his will.

Even in a business setting, people's intuitions can change when the tables are turned. As this video demonstrates, many people don't think a black restaurant owner should be forced to serve someone in the KKK. But surely it would be discriminatory to allow approved groups to enjoy wider latitude in the use of their property.

As with most hot-button political issues, there is no conflict between pure theory and pragmatism in the context of a free market. Even if the reader isn't moved by an appeal to the rights of business owners, the remainder of this article will argue that the free market has incentives to "punish" just the sort of discrimination to which most people object.

Getting Warmed Up: Does All Discrimination Seem Bad?

I am ultimately going to argue that the free market provides a financial penalty for the business behavior that antidiscrimination-law advocates think should "obviously" be illegal. But before I can make that point, we need to zero in on the specific practices that people have in mind when they use the term "discrimination." As we'll see, there is a whole host of hiring practices that most people endorse or at least tolerate, even though they are quite clearly discriminatory.

Consider the role of Virginia Woolf in the movie The Hours. As it turned out, Nicole Kidman landed the part. But suppose that Dustin Hoffman had showed up to read for it before that decision had been made. We can imagine the casting director being baffled and embarrassed, explaining, "I'm sorry Mr. Hoffman, but you just don't seem right for this part."

Hoffman could press for details. What specifically was wrong with his performance? After all, he had consulted with several female novelists and read extensively about Virginia Woolf. He really thought he nailed the scene they'd just read. And don't tell him he can't play a woman — he did a great job in Tootsie.

Of course, the casting director would explain that this is just silly. Dustin Hoffman couldn't possibly play Virginia Woolf in The Hours, because, well, he's a man. End of story.

Now, does anybody recoil in horror at that clear-cut example of "sexual discrimination"? Maybe a few hardcore feminists and some others, but most people wouldn't. They would say, "Come on, Murphy, you're being absurd. That's not the kind of thing we're talking about."

Let's consider a different example. Female coal miners (at least in one community) represent only 2 percent of the workforce, even though they are roughly half of the population. So that constitutes rampant sexual discrimination against women, right?

Again, not really. Most people understand that there are other factors driving that huge disparity. Some of the huge overrepresentation of men in coal mining might be due to sexist bosses, but before leveling any accusations against them, we would need to carefully control for those other factors.

Last example: If we went to all the Outback restaurants around the country, and rounded up (a) the women who were assigned to be hostesses, greeting people at the door and (b) the women who were assigned to be dishwashers, would we notice any patterns in their physical appearance? I'm going to go out on a limb and say that the first group would be a lot more attractive, as conventionally defined.

So is this yet another case of rampant and outrageous bias on the part of business owners? Why aren't Americans up in arms over this discriminatory policy? In fact, what's the story with all the beautiful movie stars?

The reason most Americans are perfectly happy with these latter examples of discrimination is that it's what they want. Most Americans don't have a particular preference for having a man versus a woman ring up their groceries at Walmart, and so they take claims of sexual discrimination seriously. But Americans on net do have a preference to be greeted at the door of a restaurant by a young, pretty woman, and that's why restaurants cater to that preference. This also explains why movie producers are willing to pay millions of dollars to gorgeous stars, even though less attractive thespians could give "the same" performance for much less money.

What People Mean by Bad Discrimination

In light of the above examples of what most people would not include when they demand that government crack down on "discrimination," we can define the objectionable practice this way: business engages in unfair discrimination when it treats employees differently even though this differential treatment has no basis in profitability.

Even though the typical American might not think of the issue according to the principle I've just stated, I think it adequately captures most of their intuitive judgments regarding acceptable versus "bad" discrimination. To repeat, most Americans object if a woman (say) is treated differently by her bosses even though her being female "has nothing to do with the job." The only clarification my principle adds is to precisely define what we mean by "having something to do with the job" — namely, contributing to the business's profitability.

For example, the principle explains the intuition most Americans have that it is acceptable for Outback to exhibit a strong preference for young, pretty women as hostesses, while it is not acceptable for a corporate manager to only hire young, pretty women as executive assistants. The first seems like standard business practice to most people, while the second seems like "unfair discrimination."

If analyzed, the reason for this different intuition would boil down to the fact that hiring pretty women as hostesses actually is a "business decision" catering to customer preferences, whereas hiring pretty women as midlevel executive assistants is a "personal decision" catering to the manager's preferences. The first practice makes the company more money, while the second squanders it.

Now that we've come this far, it's a simple step to prove that the free market automatically punishes "bad" discrimination. Unlike under government laws, here there is no chance of a guilty party escaping his or her punishment — and the punishment itself is exactly proportional to the severity of the "offense."

Further suppose that because of their corporate culture, the executives at Walmart just can't see this reality. Instead, they falsely believe that the woman will end up quitting her job after a few years to raise a family — even though she wouldn't. Walmart thus promotes the man and leaves the woman at her current position stocking the shelves with cereal.

Now what would happen to Walmart in this scenario in a truly free market? It's true, no government judge would award damages to the woman if she filed a lawsuit. However, in a very real sense, Walmart has been "fined" $5,000 in potential profits. If it had promoted the (better) female applicant, its net income would have increased by $10,000. Instead, its biased decision only yields an increase in net income of $5,000.

Interventionist critics might retort that this is hardly an incentive for Walmart's owners to put in place policies to weed out such bias. But these same critics, in other contexts, accuse big business of perpetrating all sorts of evils in the blind pursuit of profit. Are companies willing to outsource jobs and sell unsafe products for money, but unwilling to stamp out discrimination by their managers for money?

The story doesn't end there. If the discrimination is severe enough, then not only does Walmart (still) automatically "lose" the potential profits, but there is a large opportunity for competitors to hire away its underpaid workers — where "underpaid" is defined in reference to the workers' actual productivity. For example, if it really were true that hundreds of thousands of women were being systematically underpaid by Walmart, then Target and other stores could reap an enormous advantage by offering slight pay raises and inducing them all to quit.

It's true that in the real world, things are more complicated than the simple stories above. For example, a woman who has worked 20 years at various departments in Walmart would be more productive as a manager at Walmart than she would be at (say) Target. Therefore, the alleged gap in her salary would need to be quite large before it made sense for her to switch stores.

"As a matter of property rights, business owners should be able to legally "discriminate" just as private homeowners can."

Nonetheless, the point remains: if employees are being systematically underpaid in a firm, there is an automatic incentive for other companies to bid them away. Moreover, in the long run new workers will flock to the firms that have a reputation for fair promotion and salary practices. If it really were the case that women at Walmart eventually hit a glass ceiling, then young women considering a career in retail would need a higher starting salary from Walmart to convince them to work there rather than for a competitor.

As a matter of property rights, business owners should be able to legally "discriminate" just as private homeowners can. In practice, there are all sorts of clearly "discriminatory" practices to which few people object. Once we precisely define what we mean by "bad" discrimination, we see that the free market contains automatic financial penalties for it. There is thus neither a right nor need for government intervention to remedy unfair discriminatory practices.