GET NEWS AND ARTICLES IN YOUR INBOXPrint
A
A
Home | Mises Library | Visible Projects, Hidden Destruction 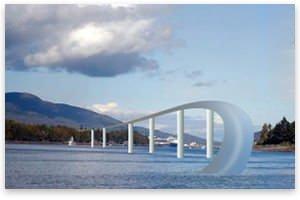 Today's crop of central planners and big-spending politicians could learn a thing or two about economics from Henry Hazlitt's classic bestseller, Economics in One Lesson, published in 1946. Common sense doesn't have an expiration date.

"There is no more persistent and influential faith in the world today than faith in government spending," Hazlitt wrote.

Everywhere government spending is presented as a panacea for all our economic ills. Is private industry partially stagnant? We can fix it all by government spending. Is there unemployment? That is obviously due to "insufficient private purchasing power." The remedy is just as obvious. All that is necessary is for the government to spend enough to make up the "deficiency."

With "public works" viewed primarily as a means of "providing employment," explained Hazlitt, an endless array of projects will be "invented" by the government. The "usefulness" of the final product or the likeliness of success of a project, whether it's a bridge to nowhere or a bankrupt solar-panel company, "inevitably becomes a subordinate consideration."

In fact, once creating jobs is viewed as the chief purpose of government spending, said Hazlitt, a project with more waste and more inefficiency in its implementation, and less labor productivity, will be viewed as superior to a less wasteful project. The "more wasteful the work, the more costly in manpower," he explained, "the better it becomes for the purpose of providing more employment."

A key fallacy in this thinking, Hazlitt explained, is that it ignores the incomes, the wealth, and the jobs that are "destroyed by the taxes imposed to pay for that spending." What's visible is the new school or new road, but what is unseen are those things that were lost through higher taxation, the unbuilt homes and unbuilt cars that don't exist because of the money that was redistributed away from those who earned it in order to pay for inefficient make-work projects. What is unseen are the unbuilt stores and unbuilt factories, the uninvested funds and the new enterprises that would have been created.

And so we end up with politicians cutting ribbons at new $500-million-per-mile tunnels, acting as if they've created something. No one at the celebratory event sees what is invisible, what has been destroyed. No one sees how the tunnel's funding and taxes created disincentives to entrepreneurial risk taking and investing. No one sees the tunnel as an obstacle to economic growth, a job killer.

Rep. Don Young (R-Alaska), for instance, likes the idea of the rest of us paying $315 million to build a useless and costly bridge in rural Alaska to an island with only 50 residents, an island that's already sufficiently accessible via a seven-minute ferry ride.

Giving a free $2 million yacht to every man, woman, and child on the island would have been $215 million cheaper than the bridge, but Rep. Young was chairman of the House Transportation and Infrastructure Committee, not the owner of a yacht company.

Economically nuts as it was, the US Department of Transportation approved the useless-bridge-in-Alaska project in 2004. Funding was later cancelled, but the bridge, like the irrepressible Jason in Friday the 13th, received funding again in the 2011 federal transportation bill. Rep. Young is currently the senior Republican on the House Transportation and Infrastructure Committee.

"We can see the men employed on the bridge," wrote Hazlitt, discussing visible benefits and hidden costs.

We can watch them at work. The employment argument of the government spenders becomes vivid, and probably for most people convincing. But there are other things that we do not see, because, alas, they have never been permitted to come into existence.