To Serve and Protect — the State

Last month, an international rights tribunal slapped America across the face through a showcase ruling that has no legal force. The Inter-American Commission on Human Rights found that Jessica Lenahan could sue the Castle Rock, Colorado, police department for its refusal in 1999 to enforce a restraining order against her estranged husband. The American courts had dismissed her case.

The tribunal's finding has reignited the discussion of a decades-old tragedy. But the issue is being cast as an expose of America's domestic-violence policies. It is more accurately an example of the extreme disconnect between the public and the police when it comes to preventing violence. The public cries, "That's your job!" The police reply, "Tell it to the judge." And American judges have consistently ruled that the police have no obligation to protect you.

The tribunal's ruling reveals a common confusion about the purpose of law enforcement in America. Lenahan claims that the police have a legal obligation to protect her from violence and so, they were delinquent in their duty. In reality, protecting people is not the mission of law enforcement. Their purpose is to enforce the law, to administer the will of the state.

Where did this near-schizophrenic view of law enforcement come from? The Lenahan case offers some insight.

Back Story on the Case

On June 22, 1999, estranged husband and father Simon Gonzales kidnapped his three young daughters despite an active restraining order against him. Frantic, his wife Jessica (then-Gonzales) phoned the police seven times and visited the police station, pleading with them for help. Even though a restraining order was in place and had been violated, the police refused to pay more than token attention to her, believing Simon to be nonviolent. Within 24 hours, the corpses of the three girls were found in the back of his pick-up truck and Simon was killed in a shootout with police.

Jessica filed a $30 million lawsuit against the city of Castle Rock, accusing the police of violating her 14th Amendment right to due process. The Due Process clause of the Amendment reads, in part,

No State shall make or enforce any law which shall abridge the privileges or immunities of citizens of the United States; nor shall any State deprive any person of life, liberty, or property, without due process of law; nor deny to any person within its jurisdiction the equal protection of the laws.

In essence, Jessica argued that the police department's refusal to enforce a restraining order violated a Constitutional entitlement to protection.

The case wended its way up to the US Supreme Court. On June 27, 2005, the Supreme Court dismissed Castle Rock v. Gonzales on the grounds that there was no constitutional right to police protection.

By Colorado law, the police are required to "use every reasonable means to enforce a protection order." Nevertheless, the Supreme Court ruled against state law. The majority held that

Colorado law has not created a personal entitlement to enforcement of restraining orders. It does not appear that state law truly made such enforcement mandatory. A well-established tradition of police discretion has long coexisted with apparently mandatory arrest statutes.

Thus, the heart of Castle Rock v. Gonzales is a police v. the people dispute. Do the police exist to protect you? The clear answer is no. From the 1856 US Supreme Court ruling on South v. Maryland through to Castle Rock, the courts have ruled that "there is no Constitutional right to be protected by the state against being murdered by criminals or madmen" (Bowers v. DeVito, 1982).

What, Then, Is the Purpose of the Police?

The American legal system is rooted in English common law, and the modern American policeman harkens back to English sheriffs, who were paid by and accountable to the government, not to the community. The main purpose of the sheriff was to enforcement what were called "government decisions." Maintaining public order was also a concern, but "order" was defined by the government.

Late 18th-century England is the specific period of history in which the modern American police force is rooted. England was then developing into a modern nation-state and many of the institutions we recognize today were being launched. One of the first "police bills" was suggested in 1785 by Prime Minister William Pitt the Younger. It would have established a tax-funded police force with jurisdiction over London; the bill was defeated. But in 1786, the English instituted a centralized municipally funded police force in Dublin, Ireland, with the explicit purpose of quashing "disorder." In the wake of the 1799 rebellion in Ireland, the police force was further centralized and strengthened.

In this as in other social measures, Ireland acted as a testing ground for what would later become policy in England. For example, the English imposed state-supported hospitals in Ireland long before they existed in Britain. The establishment of the modern police force in Ireland was completed in 1814 under Robert Peel, chief secretary to the Lord Lieutenant of Ireland, who established the Peace Preservation Police. Peel explained that the police were a "paramilitary force" — that is, it was military in both organization and training. True to their name, the purpose of the police was to preserve the peace against disruptive elements — that is, against rebellious native Irishmen.

In his essay "'Call the COPS' — But Not the Police: Voluntaryism and Protective Agencies in Historical Perspective," libertarian Carl Watner described England as becoming "more receptive" to the idea of modern police force

so that by 1829, Peel — now Home Secretary for England — was able to persuade Parliament to accept his proposal for a single government-controlled police for London; the new Metropolitan Police [was] … a tamer, anglicized version of the police he had established earlier in Ireland.

What had changed since 1785? At least two factors weighed heavily. In his book Police and Protest in England and Ireland 1780–1850 (1988), Stanley H. Palmer described one of them:

[T]he experience of organizing and recruiting the Irish police undoubtedly informed a central English political elite of the feasibility of police, their usefulness in times of disorder, the advantages of disciplined professionalism. (p. 376)

In their book Criminal justice: an introduction to philosophies, theories and practice (2004), Ian Marsh, John Cochrane, and Gaynor Melville described a second factor:

Why did the modern police force emerge at this time — at the beginning of the 19th century? Until then the threat to individual liberty had been used as an argument against organized policing. However, the coming of industrial capitalism led to large numbers of impoverished workers — unemployed or poorly employed — moving to the expanding urban centers. This, along with the general population growth, led to a fear … of the "dangerous classes." (p.135)

In short, the roots of the modern police force in England, as in Ireland, came from a perceived need for social control.

As in England, so too in America. Peel's model was largely adopted by American cities during the 19th century. As Carl Watner pointed out,

One of the dominant themes in the history of police in the United States has been the struggle over which political faction would control the police. Under the U.S. Constitution, police power was not a federal responsibility, but rather an obligation of either the state, county, or local governments. Since control over the police was a local responsibility, it had to vacillate "between city or state elective authorities. Thus, nowhere was the embrace of police and politics tighter than in the United States."

Thus, the United States Supreme Court decision in Castle Rock should have surprised no one. If the court had found that restraining orders were constitutional entitlements to protection, then the fundamental purpose of American law enforcement would have shifted away from service to law toward service to individuals. Moreover, such a court precedent would have released a paralyzing flood of lawsuits against police departments. This, too, might have changed the "job description" of law enforcement in America.

A Competing View That Is Uniquely American

Why do Americans persist in believing that policemen are there to protect them?

One reason: Unlike most nations, America has historical precedent for the belief. It is called the Old West. As Terry L. Anderson and P.J. Hill explained in their essay "An American Experiment in Anarcho-Capitalism: The Not So Wild, Wild West," the image of the Western town sheriff that is epitomized by Marshal Dillon is one of a private police force that did protect people and property. They wrote,

The West during this time is often perceived as a place of great chaos, with little respect for property or life. Our research indicates that this was not the case; property rights were protected, and civil order prevailed. Private agencies provided the necessary basis for an orderly society in which property was protected and conflicts were resolved.

These agencies often did not qualify as governments because they did not have a legal monopoly on "keeping order." They soon discovered that "warfare" was a costly way of resolving disputes and lower-cost methods of settlement (arbitration, courts, etc.) resulted. In summary, this paper argues that a characterization of the American West as chaotic would appear to be incorrect.

Anderson and Hill provide a compelling revisionist view of "the Wild West" that accords with how it is portrayed in Zane Grey novels. They write,

Recently, however, more careful examinations of the conditions that existed cause one to doubt the accuracy of this perception. In his book, Frontier Violence: Another Look, W. Eugene Hollon stated that he believed "that the Western frontier was a far more civilized, more peaceful, and safer place than American society is today."[12] The legend of the "wild, wild West" lives on despite Robert Dykstra's finding that in five of the major cattle towns (Abilene, Ellsworth, Wichita, Dodge City, and Caldwell) for the years from 1870 to 1885, only 45 homicides were reported — an average of 1.5 per cattle-trading season.[13]

In Abilene, supposedly one of the wildest of the cow towns, "nobody was killed in 1869 or 1870. In fact, nobody was killed until the advent of officers of the law, employed to prevent killings."[14]

At one time, a significant portion of what is now America was protected by private policemen who were paid by — and, so, responsible to — the community where they served. The Western sheriffs did protect people and property; they did rescue schoolmarms and punish cattle rustlers. Their mission was to keep the peace by preventing violence. 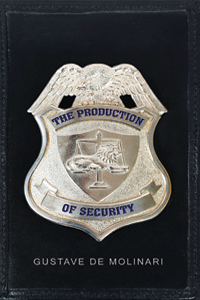 Modern policemen still bask in the glow of that legacy even as they betray it by taking state salaries and institutionalizing an indifference for the person and property of those they purport to serve. The modern policeman is, in fact, the antithesis of Marshal Dillon and an expression of the stereotypical British sheriff — a civil servant responsible only to government and governmental policy.

And so, the real message of the Gonzales tragedy is this: Protect yourself, because the police are not paid to care.