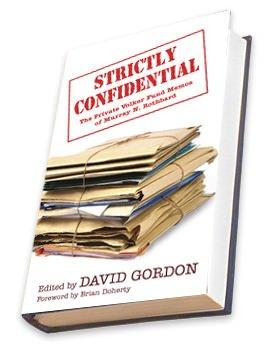 Tags EducationFree MarketsWorld HistoryHistory of the Austrian School of Economics

[This article is excerpted from Strictly Confidential: The Private Volker Fund Memos of Murray N. Rothbard
(Ludwig von Mises Institute, 2010). An audio version of this article, read by Steven Ng, is available as a free MP3 download.]

The recent publication of Rothbard versus the Philosophers, edited by Roberta Modugno, brought to many readers' attention a not very well-known aspect of Murray Rothbard's work. His vast published output did not exhaust his writing. To the contrary, a large number of important items had never been published. Many of these were reports on books and conferences that Rothbard wrote while he worked for the William Volker Fund, which during the late 1950s and early 1960s was the principal American foundation supporting classical liberalism. Professor Modugno drew from Rothbard's papers, housed at the Mises Institute, several of these unpublished reports.

Strictly Confidential continues the project that Modugno has so ably begun. It presents over forty new items from the unpublished papers. These range over political theory, history, economics, foreign policy, and literature. We begin, though, with a confidential memo, "What Is to Be Done?," which Rothbard prepared for the William Volker Fund. The Leninist echo in the title is not accidental. In this memo, Rothbard addresses an issue that concerned him throughout his adult life: how can a libertarian society be created? He thought that the Volker Fund should not view itself as just another conservative organization. Instead, it should favor a militant strategy that emphasized aid to scholars fully committed to a radical libertarian ideology. Libertarianism is a system of belief that in many respects is revolutionary rather than conservative.

The radical nature of Rothbard's libertarianism becomes clear when we turn to the section on political theory. He thought that classical liberals who favored limited government had not fully thought through their position. If the market was desirable and government intervention bad, why need there be a government at all? In "Are Libertarians 'Anarchists'?," he asks whether libertarians who accept his view about government should designate themselves by a very controversial word. (In the years after this article was written, he became much less ambivalent about this word.)

Another item in this section is of fundamental importance. One of the major conservative political theorists of the 1950s and 1960s was Willmoore Kendall, a teacher of William Buckley Jr. at Yale and a senior editor of National Review. Unlike most conservatives, Kendall thought highly of Jean-Jacques Rousseau and his "general will." American conservatism, he argued, reflects the "deliberate sense of the community." Kendall was entirely ready to endorse suppression of civil liberties if a public consensus that met his conditions supported this. Rothbard subjected this view to merciless criticism, arguing that Kendall's principle would justify the Crucifixion.

Rothbard could make little of another figure much in favor among the conservatives of the time: Eric Voegelin. His skeptical remarks on a panel devoted to Voegelin's work contrast with almost all other studies of him. I well remember Rothbard's asking me in puzzlement what Voegelin might have meant by a "leap in being."

Rothbard's criticism was of course not confined to assaults on conservative thinkers. He found little use for Charles Black's attempt to create a political myth to elevate the Supreme Court in the public's estimation. Here Rothbard foreshadowed a theme prominent in his last years: he sympathized with populism and deplored attempts by an elite to justify government. Of course, as his critique of Kendall makes clear, he did not support populist suppression of rights. The point, rather, is to what extent in the American system one should place weight on the Supreme Court to protect these rights.

The section on history demonstrates, if proof were needed, Rothbard's remarkable knowledge of both historical events and historiography. In his long report on George B. DeHuszar and T.H. Stevenson's A History of the American Republic, perhaps better than anywhere else, Rothbard shows his incredible command of details through his constant challenges to the author.

At the time Rothbard was in graduate school at Columbia University, the most influential American historian was Charles Beard. His famous An Economic Interpretation of the Constitution led many to think that Beard was a Marxist, and Rothbard addresses this issue in a carefully reasoned essay. Among contemporary historians and economists interested in an economic interpretation of history, Douglass North is probably much more studied than Beard. Rothbard did not rate him highly, and in this early review of him raises criticisms that he never retracted.

In Rothbard's brand of libertarianism, revisionist history occupied a prominent place. In order to promote a peace-loving foreign policy, it was essential to revisit the propaganda version of events used to embroil America in war. In this connection, his review of Paul Schroeder's The Axis Alliance and Japanese-American Relations, 1941 is especially valuable. Rothbard discusses in detail Schroeder's contention that the Roosevelt administration pursued a belligerent rather than conciliatory policy in the months before Pearl Harbor. Rothbard accepts Schroeder's thesis but holds that he does not go far enough. He also viewed with critical sympathy William Appleman Williams's revisionist general survey of the history of American foreign policy, The Tragedy of American Diplomacy.

It comes as no surprise that Rothbard regarded highly Alexander Gray's The Socialist Tradition. Gray was entirely clear that socialism was a fatal error; and he skewered all the icons of socialist theory, Karl Marx foremost among them. But his praise for Gray is mixed with criticism. Gray, carried away by his animus toward the socialists, often indulged in personal ridicule.

Though the struggle against bad economics was of crucial importance for Rothbard, the battle had to be waged in a correct fashion. For this reason, Rothbard did not report favorably on the anti-Keynesian pamphlet Keynes at Harvard, which during the 1960s attracted much attention among conservatives. The pamphlet cited the communist-front records of many prominent Keynesians. Rothbard thought that these affiliations did not affect the validity, or lack thereof, of Keynesian theory.

What was a better way to answer Keynes? The answer to this question takes us naturally to the next section of Strictly Confidential. Even before he was fully acquainted with Austrian economics, Rothbard had formulated penetrating criticisms of Keynesian economics. He was influenced here by the classroom lectures of one of his main professors at Columbia, Arthur Burns. Rothbard wrote a detailed account of these criticisms, which he endeavored to publish in his friend Frank Chodorov's journal, Analysis. Unfortunately, Chodorov thought that the material was too technical for his audience; but it is a brilliant internal criticism of the Keynesian system and deserves wide circulation.

The principal critic of Keynes among Austrian economists was Henry Hazlitt; and in a letter included here, Rothbard expresses his esteem for Hazlitt's work. He was pleasantly surprised at the theoretical depth in The Failure of the "New Economics"; while he realized that Hazlitt was a brilliant economic journalist, he had nevertheless underestimated him. Rothbard also admired Lionel Robbins's The Great Depression. Its Austrian account of the crash influenced his own America's Great Depression. Robbins later repudiated his own book, but Rothbard saw no need to follow Robbins in this mistake.

Rothbard's opposition to Keynes is hardly surprising, but the ostensibly free-market Chicago School fared not that much better in his eyes. The reason for this does not lie entirely in the deviations of its various members from complete laissez-faire. To the contrary, he had far-reaching theoretical objections to the Chicago approach. In particular, he opposed the unrealistic nature of assumptions that Chicago economists incorporated into their models. In Rothbard's opinion, correct economics must not allow convenience in mathematical manipulation to trump the truth of one's assumptions. Otherwise, science abandons theoretical rigor.

The Chicago School admired Irving Fisher, but Rothbard, in a paper included here, rejects the centrality of Fisher's famous equation of exchange. He found Benjamin Anderson's The Value of Money much more congenial, although he was not in entire accord with Anderson's theories.

I should like to call particular attention to Rothbard's review of Lawrence Abbott's Quality and Competition. This is a neglected book, but Rothbard thought that its notion of "quality completion" struck at the heart of the imperfect-competition theories of Joan Robinson and E.H. Chamberlin. Rothbard used Abbott's theory in Man, Economy, and State.

As mentioned earlier, Rothbard regarded a peaceful foreign policy as imperative. We should, in his view, return to the traditional American doctrine of nonintervention. In taking this position, Rothbard stood in polar opposition to the National Review Right. This group favored an aggressive policy directed against international communism. Frank S. Meyer, a senior editor of National Review, took belligerent policy to an almost-unimaginable extreme. He favored preemptive nuclear war against Soviet Russia. Meyer, who was a friend of Rothbard's, professed his allegiance to classical liberalism and a limited state. In a long analysis of Meyer's position, perhaps his most important theoretical statement on foreign policy, Rothbard maintains that one cannot consistently combine libertarian economic policies with international belligerence.

A brief concluding section shows us his taste in literature. In response to an inquiry, he lists his favorite novels. It is apparent from his essay on "Romanticism and Modern Fiction" that he could have become a literary critic, had he been inclined in this direction.

Rothbard was a true polymath, and one looks forward to future volumes that allow us even further access to his many contributions.

This article is excerpted from Strictly Confidential: The Private Volker Fund Memos of Murray N. Rothbard, edited by David Gordon (Ludwig von Mises Institute, 2010). An audio version of this article, read by Steven Ng, is available as a free MP3 download.