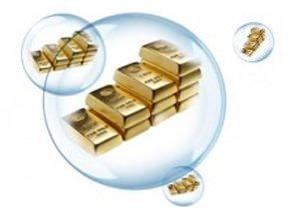 There has been a lot of speculation recently on whether or not gold is in a bubble. With Federal Reserve chairman Ben Bernanke announcing "Operation Twist" last month, gold and other commodity prices have fluctuated erratically.  Immediately following the "Twist" announcement, prices of both plummeted. Gold then stabilized a few days later. To make sense of these phenomena, one must utilize Ludwig von Mises's lesson that history must be interpreted with logic and rational deduction rather than empirical evidence alone.

An artificial boom is an instance in which the change in the interest-rate signal and the change in resource availabilities are at odds with one another. If the central bank pads the supply of loanable funds with newly created money, the interest rate is lowered just as it is with an increase in saving. But in the absence of an actual change in time preferences, no additional resources for sustaining the policy-induced boom are freed up. In fact, facing a lower interest rate, people will save less and spend more on current consumables. The central bank's credit expansion, then, results in an incompatible mix of market forces.

Increased investment in longer-term projects is consistent with the underlying economic realities in a genuine saving-induced boom but not in a policy-induced artificial boom. The artificial boom is characterized by "malinvestment and overconsumption."

The type of boom-and-bust cycle caused by cheap credit and overinvestment was reflected in the recent housing bubble as well as the dot-com bubble just over a decade ago. As former Fed chairman Alan Greenspan cut interest rates (to deal with his previous bubbles) he provided the credit and incentive to invest in such ventures as housing and Internet start-ups. Once these investments were not as profitable as they were originally, well, you know the outcome.

So what is gold's role in all this? In light of credit and monetary expansion by governments, gold has historically kept its value over time. Investors looking for a safe asset that maintains its value can always look to gold. In a recent article in the Telegraph, Emma Simon elaborates on this historical case:

Recent research from the World Gold Council shows how gold has held its value over the long term when compared with other commodities. The relative price of gold and oil has remained almost constant over the past 50 years. So although the price of both (in either pounds or dollars) has risen during this period, if you were buying a barrel of oil with bullion you would hand over roughly the same weight of gold as you would have done in 1950.

More startling is that gold has retained this purchasing power over even longer periods. It is thought that an ounce of gold bought 350 loaves in the time of Nebuchadnezzar, the king of Babylon who died in 562BC. An ounce of gold still buys roughly 350 ordinary sliced loaves today, showing that over 2,500 years gold has proved a very effective hedge against inflation, at least when it comes to everyday essentials.

So if gold holds its value in the face of inflation, what does this tell us about the latest drop in its price following Bernanke's "Twist" announcement?

At the onset of "Quantitative Easing 2," Bernanke's last big monetary-base expansion, it was speculated that the Fed may be creating a commodities bubble. Indeed, commodities enjoyed a bull run while Bernanke added $600 billion to the Fed's balance sheet: 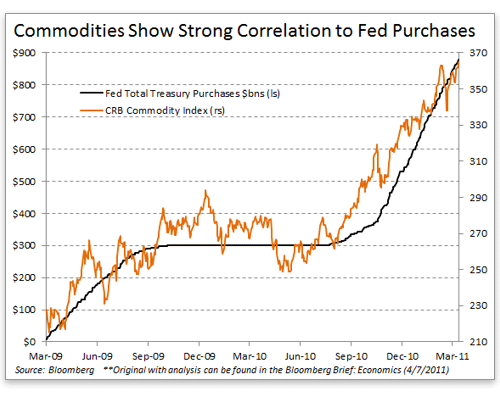 Once QE2 ended, commodities at the consumer level continued to increase in price until the "Operation Twist" announcement. There are a few conclusions to draw from this. First, we are experiencing the bursting of a commodity bubble caused by interest rates being kept artificially low by central banks around the world. These low interest rates entice large investors such as university endowments and pension funds to seek higher returns elsewhere. For example, the University of Texas endowment took the unprecedented move of purchasing $1 billion in gold bullion last April. Bernanke even boasted at the onset of QE2 last November that stock prices were up as more investors were willing to risk their money for better returns. Like commodities, stock-market gains have been heavily correlated to increases in the Fed's balance sheet. As Henry Hazlitt acknowledged, "no actual inflation happens by a simultaneous or proportional increase in everybody's money supply or money income." New money hits the economy in stages and flows into different sectors. The effect isn't felt all at once. This is just one of the consequences of artificially low interest rates.

Second, the market was expecting Bernanke and the other leaders at the Federal Reserve to do a lot more at the recent Federal Open Market Committee meeting than replicate a failed monetary trick from the 1960s. Even Goldman Sachs was surprised by the market effects of the "Twist." Judging by the plunge commodity prices took following the Fed's announcement, the market has become accustomed to expecting further monetary "easing" — especially given Bernanke's record of meeting any economic slowdown with more money printing. It should also be pointed out that China's recent attempt at slowing down its inflation-driven economy has also lowered demand for commodities; yet another case of fiat boom and subsequent bust.

While gold may be down in price now, there is great reason to assume it will continue to rise in the long term. As investor Brandon Smith explains,

In reality, there is no QE1, QE2, TARP, etc. These are not separate stimulus efforts that actually started and concluded independent of one another. They are all a part of one long fiat injection into our economy that never ended.

The Fed is ALWAYS creating fiat. Some of it is reported, most of it is not. Ask yourself this: Are interest rates still at near zero? If the answer is yes, then the fiat still flows.

Indeed, in order to keep interest rates low, the Fed must suppress by continued "easing." There is no reason to believe that central banks around the world will suddenly have a change of heart and stop injecting money into their economies to avoid a much needed correction. This is especially so in the United States; as Doug Casey points out, "interest accounts for roughly 2% of $15 trillion official national debt, or $300 billion per year. As interest rates inevitably rise, that interest amount will grow."

The Fed will, if it ever plans to, have to raise interest rates slowly if the US government doesn't plan on continuing its spending spree of buying votes. Considering both central banks of Sweden and Japan started devaluing their perspective currencies last August and what becomes of the eurozone will most likely be the massive printing of either the drachma, escudo, lira, deutschemark, or even the euro itself, gold doesn't appear to be in a bubble in the long run as governments around the world continue to spend like drunken sailors to prop up commercial banks and provide entitlements. Having your cake and eating it too is a good strategy when the money is cheap (basically free in the case of the printing press), but the party won't last forever.

We have just witnessed another boom and bust caused by the Federal Reserve's keeping interest rates too low. The erratic volatility of gold and other commodities is the direct result of further intervention into the market through central banking. A former boss and mentor of mine once conveyed to me his worry that the actions of just a few people are having a profound effect on the world's financial system.

My response was that we haven't seen anything yet.