GET NEWS AND ARTICLES IN YOUR INBOXPrint
A
A
Home | Mises Library | Rereading Our Enemy, the State

Rereading Our Enemy, the State 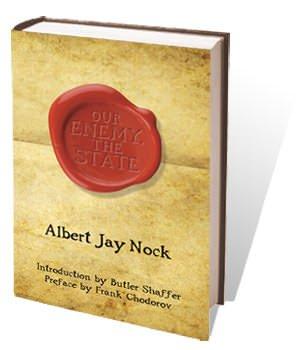 For many more years than I now care to revive in my memory, I have publicly and privately proclaimed that there are at least three outstanding books in the English language which, if they had been read as widely and thoughtfully as they deserve to be, might have spared the world many of its present misfortunes. The books I have in mind are Milton's Areopagitica, Mill's On Liberty, and Spencer's Man versus the State.

The lamps of liberty are going out, one by one, throughout the whole world. Indeed, this widening darkness is the supreme human tragedy of the age in which we live. In our desire to flirt with knowledge, we have jilted wisdom. There is only one end to this illicit kissing of the ephemeral – a stubborn, stupid unwillingness to embrace the eternal. Moral rot is eating away the very roots of individualism, and thereby destroying the soul of man at the fearful price of granting secular exaltation to a soulless State.

From now onwards I, for one, intend to add a fourth book to the jeweled necklace of libertarian literature. Our Enemy, the State, by the late Albert Jay Nock, is given this high precedence in my humble estimation because it has in common with the classics I have mentioned, all those qualities of clear thinking, objective presentation and lucid exposition which distinguish the wise philosopher from the merely intellectual pamphleteer. The one writes for all eternity: the other for the moving moment that must inevitably pass away.

Superficially, one of the grimmest paradoxes of the twentieth century is the emergence of the atom bomb at a time when it is painfully evident that the overwhelming majority of mankind is afflicted with delayed adolescence. Substantially, however, it is not a paradox at all. May it not be that the universality of the adolescence and the splitting of the atom are patterned in the natural law of cause and effect? Is it unlikely that we have been inflicted with the super-scientific bomb because we have refused to grow up and because we have failed to cherish and honor the spiritual bounty of our inheritance?

Albert Jay Nock obviously absorbed every word of Herbert Spencer's masterpiece and, having done so, his own mighty pen began where Spencer left off. Nock's prescience is uncanny. Reading his book in this Year of Grace, 1952, it is difficult to realize that it was written in 1935. It reads like contemporary journalism, but with this tremendous difference: it is written in prose of such majesty and simple beauty that it will rank, for all time, as imperishable literature. Furthermore, it states a case against Statism that is as fearless and provocative as it is profound and unchallengeable.

The State, as Nock implies over and over again, is merely the politicians' dreams come true. It is political conjuring, whereby "all the people all the time" are invited to believe that the State and Government are one and the same thing. The truth is, of course, that whereas Government has its roots in society, the State is a parasitical, malignant growth that seeks to destroy society by bribery, corruption and compulsion.

Our Enemy, the State, as the very title emphasizes, warns every thinking man and woman to remember that the price of human liberty is eternal vigilance. It stresses, also, that liberty, unlike justice, is not a right. It is an attitude of mind, and a beatitude of the soul.

This very great book reminds us that the State is at once a myth and a terrible reality. It is a myth in the sense that it has no validity outside the twisted, crooked mentalities of totalitarians. It is also a reality in the sense that, whenever it is allowed to usurp the throne of Government, it not only commandeers the power that corrupts but, in order to give finality to its ascendancy, it must acquire for itself, and for itself alone, the absolute power that corrupts absolutely.

The great value of Nock's diagnosis of Statism, and all its implications, is that it establishes a pregnant matrimonial alliance between philosophical history and political science. We are able, therefore, to see the evolutions and revolutions of human understanding, and misunderstanding, in perspective.

In other words, the author enables us to contemplate objectively the State's progressive efforts to subjugate society. Statism is political ideology, seeking outlets in the body politic whereby it can subtly transmute social power into State power. Communism, socialism, fascism, and all the other left-wing ideological variations, are the outward and visible signs of this inward and secular infiltration.

Herbert Spencer invited his generation to recognize the natural antagonisms that must exist between man, as man, and the State, as master. Nock was able to extend and widen the invitation for his own day and generation. Much that Spencer conceived in creative and prophetic intuition, Nock saw with his own eyes as contemporary phenomena. But, like Spencer, he too reinforced his fine scholarship with intuitive "second sight" into the future.

It is impossible to read this burning, passionate essay on the State as tyrant without realizing that man himself is all too frequently his own worst enemy.

It would be bad enough if we merely admitted that man is in danger of selling his soul for a mess of political pottage, in terms of the so-called Welfare State. Unhappily, truth demands the unequivocal admission that man is, today, showing too many signs of his guilty willingness to give his soul away, in blind obedience to a State masquerading as Father Christmas. 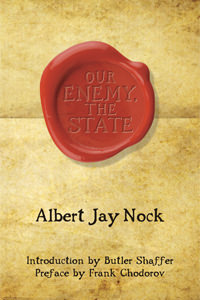 I could wish that a thousand millionaires would pool their petty cash in support of a literary crusade dynamically inspired with the will and purpose to make this dead man's masterpiece a living monument in the land of his birth, and beyond.

Our Enemy, the State should be in the hands, and in the minds, of the new and rising generation which is being so cleverly and so wickedly seduced by power-drunk State idolaters. It is a book which offers inspired guidance to those who have ventured off the known way, only to find themselves in a jungle of frustration and perplexity.

Above all, it is a sincere, honest, courageous and finely documented libertarian approach to the urgent spiritual, social and economic problems which beset us, and which mankind must resolve if declining civilization is to escape total eclipse.

This article was originally published as "Our Enemy, the State: A Re-Review" in The Freeman, February 25, 1952.

Cecil Palmer, noted British publisher, author, and lecturer, was a founder and executive officer of the Society of Individualists. His sudden death on January 18, 1952, came shortly before the publication of his book The British Socialist Illfare State.