In Praise of Shoddy Products 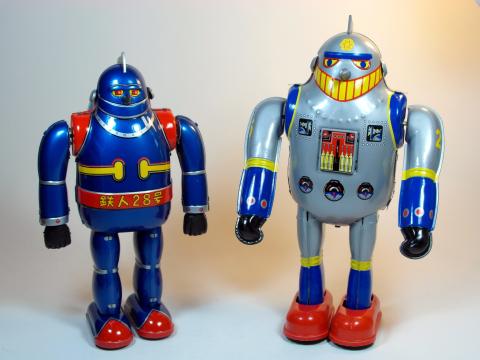 The average family will spend about $1000 on Christmas gifts, and much of what we buy might be described as rather shoddy. It is prone to break and wear out. Kids' gifts might not last the day. Our new clothes might not make it to next season. Our electronic stuff might break down in a year. Our kitchen gadgets might snap and break. Household gifts of all sorts just aren't what they used to be. The spines of our books will snap, our yard equipment will need replacing by summer's end, and our tools will break rather than last generations as our granddad's did.

Many commentators have noted that kitchen appliances, and many other things, just don't seem to last the way they used to. In the old days, you got a blender as a wedding gift and your daughter would use it when she came home from college. These days we are lucky if a blender or hand mixer lasts a few years. The same seems true of washers and dryers, lawn mowers and edgers, clothing, electronic equipment, and even homes.

Some people blame China, others Wal-Mart, others the web, and still others just think it is a sign of the times when civilization is sinking into a hole in preparation for Armaggedon. Regardless, that this trend is awful is rarely questioned. So let us question away.

Paradoxically, this is not a bad thing but a sign of rising wealth. It is a sign of prosperity that we prefer the new to the repaired. As consumers, we show a preference for throwing away and replacing rather than being stuck with a dated gizmo or unfashionable item. What's more, our preference for shoddiness over durability is not wasteful at all, but merely a reflection of the market's ability to adjust to consumer demand with resource supply. In making ever more shoddy products manufacturers are doing what is best for all of us.

To begin to understand why, consider that in a thousand years, the pyramids will still be standing but your subdivision will likely be long gone. Does this indicate that the ancient world was a better and more prosperous place because it made structures that will last and last? Clearly not. Durability is only one value among many competing values in the production and consumption process, and it is very likely to decline in the order of priorities as wealth increases.

One of the many targets of anti-market thinkers in the 1950s was so-called "planned obsolescence"—the practice of manufacturers to design their products to wear out and break down at a certain point in the future. In this conspiracy view, this practice would thereby cause consumers to have to go out and buy a new and very similar item. Clever manufacturers would couple this planned obsolescence with a cosmetic change masquerading as an improvement to fool the consumer into thinking that he got his money's worth, when in fact he was really being ripped off, paying twice for what should have only been bought once.

There are bad assumptions here. First, the model assumes that the manufacturers are far more clever than the consumers, who are treated as some sort of passive victims of powerful capitalist interests. In fact, in the real world, it is the manufacturers who are clamoring to keep up with the ever-changing, discriminating, cheap, and fussy consumers, who dump products and switch to others for reasons rational and mysterious. The full-time job of entrepreneurs is to discern the values, find a way to serve them that is economical, and even anticipate them.

Second, the model makes an odd normative assumption that products should last as long as possible. In fact, there is no preordained market preference for how long goods should last, as the pyramid example illustrates. It is probably possible to make a car or a toothbrush that would last 100 years. But is it desirable? Consumers prefer lower price, the newest technology, and different amenities other than longevity. As materials have fallen in price, it makes more sense to replace the good than to create it to last forever. Do you want a $200 blender that lasts 30 years or a $10 blender that lasts five years?

Whatever consumers prefer in the long run is what dominates the market. How can we be sure? Competition. Let's say all manufacturers make blenders that die in 5 years only, and this fact is widely loathed. One manufacturer could beat the competition by providing a product that emphasizes longevity over other features. If consumers really value longevity they will be willing to pay the difference, and many people do.

For many things, it makes economic sense for them to last only until the next improvement comes along. Imagine if a computer manufacturer produced a machine that was advertised as a lifetime computer, the last computer you will need as long as you live, complete with software that will similarly last forever. Anyone with savvy would be skeptical, realizing that this is the last thing you want. Far from being a rip-off, then, obsolescence is a sign of rising prosperity.

In times of massive and frequent technological improvement, it would be sheer waste for manufacturers to dump resources into making products last past their usefulness. In computers, for example, to make them durable enough to last more than 6 years would be a big mistake in today's environment. The same could be true of house longevity. Everyone knows that old houses can be charming but bears to grapple with in terms of heating, cooling, plumbing, wiring, and everything else. The efficient solution might well be to level a house and rebuild rather than attempt an upgrade.

This would only be a waste if you push longevity ahead of technological improvement. Individual consumers are free to do that, but we have no basis for declaring this value set as fixed and unchanging. We do not live, nor do we wish to live, in a world that is static, where development never occurs, where what exists has always existed and always will.

So it is with clothing and furniture and other goods. As people have more disposable income and it rises over time, people want to be able to replace what they wear to accord with changing tastes. A society in which clothes are forever mended, electronic parts are forever fixed, and existing products are forever bucked up to go another mile is not necessarily a rich society. To be able to toss out the broken and torn is a sign of rising wealth.

It is common for people to look at a hollow door or a composite-wood desk and say: what cheap and shoddy products these are! In the old days, craftsmen cared about the quality of what they made! Now no one cares and we end up being surrounded by junk! Well, the truth is that what we call high quality from the past was not available to the masses to the same extent it is today. Homes and cars might have lasted longer in the past but far fewer people owned them than in today's world, and they were far more expensive (in real terms).

In a market economy, what is called quality is subject to change according to the preferences of the consuming public. Whether products should last a lifetime (such as fine jewelry) or a day (fresh bread) cannot be determined outside the framework of a market economy. No central planner can say for sure.

If your book falls apart, your clothes collapse in tatters, and your washing machine suddenly keels over, resist the temptation to decry the decline of civilization. Remember that you can replace all these items at a fraction of the price that your mom or hers bought them. And you can do so with minimal fuss and trouble. And it is very likely that the new versions of the old products that you buy will have more bells and whistles than the old.

You can call this planned obsolescence if you want to. It is planned by producers because consumers prefer improvement to permanence, availability to longevity, replaceability to repairability, motion and change to durability. It is not waste because there is no eternal standard by which we can measure and assess the economic rationality behind the use of resources in society. This is something that can only be determined and judged by individuals using resources in a market setting.

Of course a person is free to live in a drafty stone house, listen to music on a Victrola, wash clothes with a washboard, tell time with a sundial, and make one's clothes from flour sacks. Even now this is possible. One is free to be completely obsolete. But let us not equate this status with wealth, and let us not aspire to live in a society in which everyone is forced to prefer the permanent things to the cheap, improving, and widely available things.