The "Luddites" were early 19th-century British textile workers who protested the introduction of mechanized looms by destroying them and issuing proclamations denouncing the new technology in the name of the mythical "King Ludd" of Sherwood Forest. What the Luddites failed to understand — and what many neo-Luddites today fail to understand — is that "labor-saving" technology that reduces production costs causes prices to fall, which in turn increases consumer purchases and generates more jobs. For example, when direct-dialing telephone service was invented, the communication workers' union initially protested the supposed loss of jobs, but reversed its position in a few years once it realized how thousands of additional jobs were created by making telephone services so much cheaper.

The latest example of neo-Luddite thinking is the Obama administration's recent decision to attempt to block a proposed merger between AT&T and T-Mobile USA. According to an August 31 New York Times article, stopping the merger will supposedly "help save jobs of American workers." "The view that this administration has is that through innovation and through competition, we create jobs," said James M. Cole, a deputy attorney general for antitrust. Mergers usually reduce jobs "through the elimination of redundancies," said Cole, "so we see this as a move that will help protect jobs in the economy."

Everything James Cole said here is ridiculous and contradictory. It is labor-union "economics" at its worst. He admits that mergers usually "reduce redundancies," which is another way of saying that they usually cause companies to reduce production costs and become more competitive. If they become more competitive, that means sales will increase, the company will expand, and more jobs will be created. He also claims that "innovation" creates jobs without realizing that the proposed merger is in fact an innovation. In a highly competitive market like the cell-phone industry, it is imperative that companies constantly innovate in ways that reduce costs and prices as well as improving upon and creating new products. There are two kinds of innovation, after all: product improving and cost reducing. AT&T and T-Mobile USA are attempting to become more innovative and competitive with their proposed merger, contrary to Mr. Cole's pronouncement.

The administration's position here is a combination of Ludditism and mercantilism. The mercantilists of centuries past believed in the economic superstition that wealth was created by the hoarding of precious metals like gold. The Obama neomercantilists apparently believe that jobs, not gold, must be hoarded and "protected." They fail to recognize that a nation's economy is dynamic, with jobs constantly being destroyed and created, driven mostly by the ever-changing whims of consumers. Cost reductions that come from reducing some kinds of jobs ("redundancies" in James Cole's language) inevitably lead to the creation of different kinds of jobs — and more of them.

Then there's the red-herring argument made by the Obama administration that the merger will supposedly "reduce competition." But how, exactly, is this supposed to happen? An Internet search revealed that there are currently at least 180 cell-phone companies competing in the United States, with hundreds more all around the world who pose as potential competitors in the US market. The traditional meaning of "reducing competition" in the context of antitrust regulation is "tending to create monopoly." Mainstream economics has always equated monopoly with higher prices. How on earth could AT&T and T-Moblile USA prosper by raising prices when they have 180 competitors who could underprice them and grab their market share away? 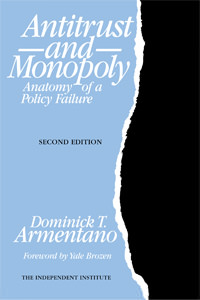 The answer to this rhetorical question is that they could not prosper by raising their prices. Their obvious intent is to reduce costs and prices (by "eliminating redundancies," for example) and to gain more market share that way, all to the benefit of consumers. (This is not to say that they will necessarily succeed in doing so, for no company possesses omniscience or is void of incompetence.)

Antitrust regulation in the hands of an administration that is so belligerently ignorant of economics (and of economic history) is a guaranteed job and prosperity killer.