GET NEWS AND ARTICLES IN YOUR INBOXPrint
A
A
Home | Mises Library | Mr. Rubenstein, You're No Adam Smith

Mr. Rubenstein, You're No Adam Smith 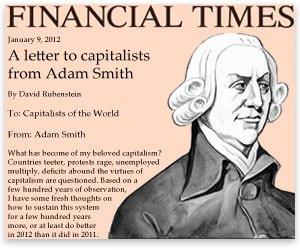 It seems like a simple question, but many who pass as authorities in the court of public opinion are dreadfully wrong on the answer. Ludwig von Mises described capitalism as "essentially a system of mass production for the satisfaction of the needs of the masses." Friedrich Hayek called it "the system of free markets and the private ownership of the means of production," which is an "essential condition of the very survival of mankind."

Perhaps the most succinct definition of capitalism comes down to this: a state of affairs where two private parties are free to enter into a contract where one acts and the other remunerates. As the Austrian School emphasizes, such a mutual agreement means both parties are necessarily better off than before or else such a transaction would not have taken place.

This definition of capitalism is not the one held by those in the media commentariat however. In a recent open letter in the Financial Times addressed to "Capitalists of the World" from "Adam Smith," David Rubenstein, managing director and cofounder of the Carlyle Group, plays the hypothetical role of the Wealth of Nations author in warning about the excesses of the system he so famously praised over two centuries ago. While Rubenstein rightly identifies that capitalism "has succeeded in creating more opportunities for more people than anyone — including me — ever imagined," his attributing of a system defined by uninhibited market transactions to what currently exists around the world is flatly mistaken.

In determining the cause of the housing bubble and ensuing financial crisis, Rubenstein commits the same fallacy as many of his peers when criticizing a system of free enterprise. He writes,

What is not satisfying is the view that capitalism has to work perfectly to justify its presence.… I always felt there were two principal flaws — and we saw them come to a head over the past few years. The first is that unfettered exuberance about wealth creation will produce unsustainable booms and inevitable crashes. The great recession, fuelled by cheap credit, is a textbook example of this flaw.

With the existence of the Federal Reserve, Fannie Mae, Freddie Mac, the Securities and Exchange Commission, the Commodity Futures Trading Commission, and other bodies that make up the 115 regulators that oversee the financial sector in the United States, the claim that such a system constitutes free-market capitalism is preposterous. The evidence is clear that Alan Greenspan's cutting of the federal-funds target rate in the early 2000s and the expansion of the monetary base set the stage for the housing bubble. That "unfettered exuberance" on Wall Street was only a byproduct of the Fed and government's intervention in the economy. Business fluctuations brought on by changing human demand do exist in true capitalism, yet they are self-correcting and don't lead to years of prolonged unemployment.

Rubenstein goes on to accuse capitalism of causing a great increase in wealth inequality while he ignores the government interference that benefits politically savvy businesses at the expense of competitors.

The second is the inequality that results when the charge towards wealth creation leaves behind those less able (in most cases through no fault of their own) to adapt or to compete with the hard-chargers.

No proponent of free-market capitalism denies that wealth disparity develops. For it is that exact wealth disparity that serves as an incentive for entrepreneurs to create and workers to produce in order to better their own personal standard of living. Contrary to popular belief, capitalism is not a system of rugged individualism but rather one of social cooperation that expands the division of labor and offers new opportunities of employment even for those less able to compete with more-productive workers.

Despite his confusion about the definition of capitalism, Rubenstein offers a few recommendations on necessary steps to get the world over the current economic slump. First is a plea to save what has become known as the eurozone crisis. Instead of advocating for a real capitalist solution — an actual free market in currency creation and usage — Rubenstein asks for those countries that benefit from the euro to "dig deeply into their pockets" to save the once-thriving currency. Yet capitalism is ultimately a system of private gains and losses to be borne by those who own the means of production. Rather than allowing government bondholders to suffer the consequences of their malinvestment and overstretched public bureaucracies to live within their means, a eurozone bailout is in no way a capitalist fix but an egregious attempt at socializing losses by forcing them on to Joe Taxpayer. The unsustainable accumulation of debt that preceded the financial crisis in the EU was never a product of the free market but of a fascist-like relationship between large banks and the euro governments they finance.

Rubenstein mentions the need to "Educate. Educate. Educate." by reforming public school systems and highlighting the need for governments to "allocate resources more efficiently." But of course public officials who derive their income from coercion are never capable of economizing resources as prudently as private individuals. If Rubenstein truly wanted the education industry to thrive, he would demand the government relinquish its claim on the sector and allow the market mechanism to bear its fruits. Teachers offer a service like any other business. Having bureaucrats in charge of a great portion of the industry is no better than nationalizing the production of sweaters or miniskirts. Economic calculation and resource allocation are best utilized by those who earn their income from voluntary consumers. The consequence of the public education system, reliant on force for payment, has been an increase in cost for service and no real increase in the quality offered. In other words, the industry's lack of the elements that define capitalism has been responsible for its decline.

While Rubenstein acknowledges the need for the US government to cut its deficit and debt, he mentions the need for emerging market integration into the global economy. Despite Rubenstein's claim to be channeling Adam Smith, such a suggestion flies in the face of what the late economist espoused. Capital flows into the economies of Brazil and China precisely because of their respective prospects for growth and wealth generation. There is no need for an overarching government authority to dictate such a policy; individual entrepreneurs and investors are already pursuing it with their own funds.

Rubenstein's Smithian masquerade falls short due to his misunderstanding of the basic definition of capitalism. Unfettered free markets are made up of mutual transactions and private gains and losses. Government intervention, whether in the banking or education industry, retards such an enriching system to the benefit of those in political favor. To attribute the failure of public policy to capitalism is disingenuous as it provides justification for an increased role of the state into the private affairs of individuals.

Mises saw through such deception almost seven decades ago when he wrote,

As a rule, capitalism is blamed for the undesired effects of a policy directed at its elimination. The man who sips his morning coffee does not say, "Capitalism has brought this beverage to my breakfast table." But when he reads in the papers that the government of Brazil has ordered part of the coffee crop destroyed, he does not say, "That is government for you"; he exclaims, "That is capitalism for you."