The Long History of Government Meddling in the American Marketplace 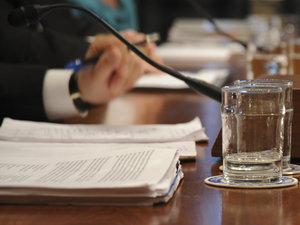 Although the causes of economic crises recurring throughout US history and often spreading worldwide can’t be proven using empirical means, oppressive government regulations favoring special interests in relevant industries have preceded every crisis.

None of these things are recent phenomena, but can be found again and again throughout American history.

After the Revolutionary War, when the agrarian economy was beginning to industrialize, politicians pursued British-style mercantilism, including colonialism, against natives and regulations blocking competition in banking and manufacturing. Financial panics and depressions resulted under a national bank in 1792 and from 1819–21 and state-regulated banks from 1837–43 and 1857–59.

The Civil War was a dispute between Republicans representing manufacturers in the North that blocked free trade with import tariffs against Europe, and Democrats representing agricultural plantations in the South that refused to replace slavery with mechanization using the North’s high-cost goods.

The “Gilded Age of Capitalism” shifted the economy from agriculture to industry led by “robber barons” who lobbied mostly Republicans. The government helped create railroad monopolies with low-interest loans, land grants, and special frontier privileges. The railroads formed a conglomerate that monopolized much of the rest of the economy by favoring large over small customers (e.g., Rockefeller’s Standard Oil over farmers), large suppliers (e.g., Carnegie Steel), and big banks (e.g., J.P. Morgan).

Both railroads and banking (with both national and state banks) were implicated in the severe financial panics from 1873–78 and 1893–97, occurring during the Long Depression of 1873–96, and another panic in 1901. Banking regulation led to the panic in 1907.

During the Progressive Era, the US used regulation to form many of today’s monopolies. From 1906 to 1910, Republicans led efforts to create state-regulated electricity and natural gas utility monopolies, and the Seven Sisters oil and physician oligopolies. In 1913, Democrats sanctioned the telephone monopoly and founded the Federal Reserve banking monopoly (i.e., which regulates the banks). After World War I, the Fed raised interest rates which led to the depression of 1920–21, which bankrupted many companies and led to manufacturing oligopolies, including in the automotive industry.

Thanks to these new frontiers in a regulated economy, by the 1920s, only 200 corporations controlled over half of all US industry and the richest 1 percent of the population owned 40 percent of the nation's wealth. As in recent times, the Fed responded by providing easy credit at low interest rates, which led to increased consumer and business debt, uneconomic and risky investments, and inflated assets, including stock prices (further increasing wealth disparity). After the Fed tried to raise interest rates, the result was the Great Stock Market Crash of 1929.

During the 1930s, the crash led to the Great Depression, the worst financial crisis in US history, and then spread from the world’s largest economy globally, albeit with less severity abroad. Democrats, led by President Roosevelt (FDR) and supported by bankers, agriculture, oil, and labor, tried to redistribute wealth by limiting competition through government takeovers, including trucking, airline, and housing industries, and restricting the supply of food and oil. This led to continued global depression and World War II, which was financed with debt.

Finally, the post-war boom or “Golden Age of Capitalism” saw a dismantling of wartime regulations and growing opportunities especially in manufacturing (like China today). During global rebuilding, the US became the world’s economic leader with about 4 percent annual growth, even with increasing interest rates, decreasing debt, and high taxes. Although wealth disparity was historically low, Democrats increased regulation of necessities, leading to today’s high costs.

FDR had taken money from taxpayers to subsidize home loans at low interest rates including guarantees from the Federal Housing Administration (FHA) since 1934, and securitization by the Fannie Mae secondary mortgage monopoly since 1938 (and Democrats added Freddie Mac to form a duopoly in 1970). After the war, the subsidies led to unsustainable demand for more expensive and larger homes, urban sprawl, and a shortage of affordable housing.

FDR had also taken money from taxpayers to subsidize favored farm crops, which discouraged alternative crops. After 1946, Democrats increased subsidies leading to inflated prices for farmland. Since 1973, the US has subsidized food overproduction leading to dumped exports that retard agricultural and economic development in the developing world and uneconomical bio-fuels protected by tariffs against Brazilian ethanol (until 2012). FDR had led support for the nationalization of oil industries (e.g., Mexico), and military spending to defend dictators in oil-rich countries (e.g., Saudi Arabia).

In 1965, Democrats led nationalization of about half of health care purchasing through Medicare and Medicaid. These programs, and later Obamacare, subsidized increased demand while the supply of doctors and hospitals has been restricted. The resulting health care crisis led to skyrocketing costs nearly triple those of other developed countries.

The dreaded stagflation of the 1970s is considered tied for the second worst financial crisis in US history. The Fed responded to inflation by raising interest rates, leading to the Great Recession of the early 1980s, which led to the Savings and Loan Crisis, and spread as the Latin American Debt Crisis. Since then, the Fed has been lowering rates overall.

Meanwhile, politicians claimed to be trying to increase cost efficiency through privatization of public industries, and foster competition through partial deregulation of private industries. Worldwide, politicians allowed the monopolists to write the rules, including preferential bargain sales to cronies, which led to even nastier deregulated monopolies.

Deregulation was limited mainly to common carrier industries, including airlines in 1978, trucking in 1980, telecommunications in 1996, and electricity and natural gas utilities during the 1990s, and also banking in 1999. For example, states allowed utilities to design rigged trading schemes, gain preferential access to transport lines, and sell assets to affiliates for pennies on the dollar. Deregulation declined after manipulations led to the California Energy Crisis of 2000.

After the energy crises and bursting of the internet bubble in 2000, big business Republicans and big government Democrats practiced corporatism. The US House Budget Committee explains: “In too many areas of the economy — especially energy, housing, finance, and health care — free enterprise has given way to government control in partnership with a few large or politically well-connected companies.”

In 2003, regulations led to increased ethanol production from corn, but after that led to the 2007–08 Food Crisis, growth was stopped by mandates that the fuel be made from expensive-to-process cellulose.

Meanwhile, George W. Bush promoted home loans securitized through the Fannie and Freddie duopoly and the Fed’s big banks, while encouraging the Fed to lower interest rates, leading to a bubble in home ownership and prices. Soon after the Fed started raising rates, the bubble burst leading to the 2007–09 Subprime Mortgage Crisis, 2007–08 Financial Crisis (considered tied for the second worst financial crisis in US history), 2008–10 Automotive Crisis, and 2008–12 Global Recession.

In 2010, Dodd Frank gave politicians more oversight over the Fed’s big banks, increasing influence peddling, and risks of crises. The Fed has been loaning trillions of dollars at low interest rates to the big banks. Lower rates can encourage financial engineering, like mergers, which allow bankers and corporate executives to bleed profits from large corporations, who receive preferential tax treatment, especially abroad. Since 1998, the financial sector has spent over $6 billion lobbying Congress.

The Bank for International Settlements, or so-called “bank of central bankers,” warns another global debt crisis is coming, and the debt-trap is now even worse than before 2007. The US has led many nations to continue to lower interest rates and accumulating private and public debt. Now, a slowing economy could make the debt toxic and lead to a financial crisis that would be hastened as the Fed raises rates. The Bank warns: “It is unrealistic and dangerous to expect that monetary policy can cure all the global economy’s ills.”

Obamacare could allow bureaucracies to control patient treatments and prices, while lobbied by the industry. Since 1998, medical interests have spent over $6 billion lobbying Congress.

Today, there is no party that favors true privatization or free markets. Republicans favor monopolization, while claiming support for free markets and blaming the Democrat’s high taxes and regulations for crises. Democrats favor nationalization, while blaming non-existent free markets for crises. Meanwhile, many Americans appear to be embracing the regulatory nationalism of crony capitalist Donald Trump or the democratic socialism of Bernie Sanders.

The solution, however, is simply to take as much power as possible out of the control of corruptible politicians and their special interest supporters.

Mike Holly received Master degrees in Business Administration and Chemical Engineering from the University of Minnesota in 1980 and 1983, respectively. His health care article published on Mises Wire is an updated and condensed version of his MBA thesis. He did his internship at the Minnesota Department of Health where he invented an ambulance allocation model. After receiving his chemical engineering degree, he worked as an Alternative Energy Engineer and Business Analyst with the Minnesota Department of Energy and Economic Development from 1984-5. In 1985, he co-founded Sorgo Fuels and Chemicals, Inc. to develop technology for the production of various products from an agricultural crop, but was blocked by preferential government policies favoring monopolies and also production from other resources. In 2016, he founded Americans Against Monopolies  to catalog the preferential government policies favoring monopolies in virtually every major U.S. market.

Mike Holly received Master degrees in Business Administration and Chemical Engineering from the University of...

The Long History of Government Meddling in the American Marketplace

American history is a story of non-stop efforts by governments to intervene in the marketplace through regulations,...