The Awful Truth about Republicans 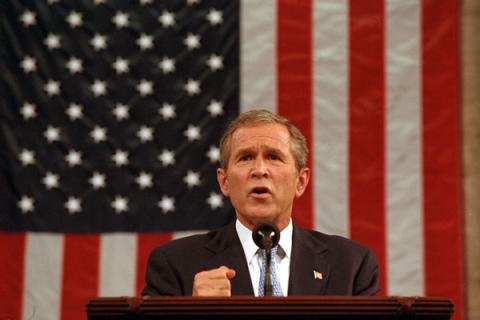 Anyone who wants cuts in the size and scope of government should be concerned and frustrated with the policies of President George Bush and the Republican-controlled Congress. Government spending has increased enormously and the federal budget has plunged ever more into deficit.

Protectionism, regulation and government power are on the rise, and we are at war or in conflict with a record number of countries around the world. The Republican-controlled Federal Reserve has pushed interest rates to below 1% while it frantically tries to flood the economy with money and credit.

Even mainstream economist Jeffrey Frankel has recently noted (in the Milken Institute Review) that the "Republicans have become the party of fiscal irresponsibility, trade restriction, big government, and failing-grade microeconomics."

However, there has not been a sudden sea change in party platforms and the rampant fiscal irresponsibility of the Republicans is not a mystery; they are merely returning to their historical roots. The Republican Party was established as a party of big government and economic intervention. Their reputation as a party of limited government is of more recent vintage and stands on a flimsy foundation.

The Republican Party that emerged in the 1850s was an amalgamation of historical influences, third parties, and interest groups. One group that entered the Republican Party was the Free Soil Party, whose primary platform was free land and subsidies for farmers. In contrast, most Democrats favored selling off the public lands to finance government expenditures, keep tariff rates low, and prevent deficit spending.

Also joining the Republican Party in the 1850s were supporters of the Know Nothing Party. The Know Nothings were most concerned about immigrants coming into the country, competing against labor, and suppressing wages. They favored restrictive immigration and protective tariffs to keep wages high, while Democrats supported both immigration and free trade.

The Whig Party formed the core of the Republican Party with its economic platform consisting of protectionism for industry, a national bank and currency, a large national debt, and a larger federal government engaged in extensive public works.

Also joining the Republican ranks were the Prohibitionists and the Abolitionists. Members of the Republican Party generally shared an opposition to slavery and advocated policies of containment and colonization.

The ambitious economic agenda of the Republican Party had its roots in the economic platforms of Federalist icon Alexander Hamilton and Whig leader Henry Clay. They advocated protective tariffs for industry, a national bank, and plenty of public works and patronage. The flurry of new laws, regulations, and bureaucracies created by Lincoln and the Republican Party during the early 1860s foreshadowed Franklin Roosevelt's "New Deal" for the volume, scope and questionable constitutionality of its legislative output.

In fact, the term "New Deal" was actually coined in March of 1865 by a newspaper editor in Raleigh, North Carolina, to characterize Lincoln and the Republican Party platform. ’s massive expansion of the federal government into the economy led Daniel Elazar to claim, " . . . one could easily call 's presidency the ‘New Deal’ of the 1860s."1 Republicans established a much larger, more powerful, and more destructive federal government in the 1860s, just as Bush and the Republican Congress are doing today.

In fact, modern Republicans are almost a mirror image of the original party. Protectionism was a high priority of the early Republican Party. They quickly enacted the Morrill Tariff, which raised tariff rates to extremely high levels, and their extreme protectionism continued throughout the era of Republican dominance.

There is really little debate that these Republicans were the primary proponents of protectionism, particularly in the areas of steel and textiles. Modern Republicans, from Reagan to Bush II, have given us protectionism for a variety of favored industries, including steel, as well as the "managed trade" of NAFTA and the WTO.

In the area of deficit spending and the national debt, the early Republicans, like their present-day counterparts, produced large deficits and national debt. Pre-Civil war Democrats had worked effectively to eliminate the National Debt and to close the national banks.

In recent years Republicans have been awful in the area of monetary policy, but that is also a long tradition in the Republican Party. In their early years they nationalized money and banking, a policy that helped big-city banks at the expense of the common citizen, particularly in the South and West.

As the National Banking System took shape after the War, it was apparent that human ingenuity would have had difficulty contriving a more perfect engine for class and sectional exploitation: Creditors finally obtaining the upper hand as opposed to debtors, and the developed East holding the whip over the undeveloped West and South. This tipping of the class and sectional balance of power was, in my opinion, the momentous change over the twenty-three-year period, 1850-1873.2

Looking at the consequences of this legislation, leading monetary economists concluded:

The provision of the Acts of 1863 and 1865 that established the national banking system were designed to remedy two perceived defects of the antebellum state banking system. One was the circulation of a wide variety of state bank notes, often at a discount, which made for an inefficient payments system. The second defect was instability of the note issue; marked by over issue, bank runs and failures, and periodic suspensions of convertibility into specie. To remedy the first defect, national bank issues of bond-secured currency replaced state bank notes. To remedy the second defect, stringent reserve and capital requirements, oversight, and regulation by the Comptroller of the Currency were conditions for national bank charters. Unfortunately, the remedies did not work as intended by the architects of the national banking system. Instead, the system was characterized by monetary and cyclical instability, four banking panics, frequent stock market crashes, and other financial disturbances."3

Favoritism for big business has always been a hallmark of the Republican Party. As a consequence they tend to favor subsidies, public works projects, and regulations that are favorable to incumbent businesses. The biggest public works project in the nation’s history was the building the intercontinental railroads, a policy that truly galvanized the membership of the Republican Party.

Republicans also sponsored the Sherman (Anti-Trust) Act of 1890 and the Act to Regulate Commerce of 1887, which had the stated purpose of protecting the general public but the effect of protecting big business, particularly railroads, from competition. Modern Republicans seem even more in love with public works projects, even in far-away , and for that matter the moon and Mars.

In the area of regulation, Bush and the Republicans have regulated the Internet in the name of Spam and telephone calls to put telemarketing out of business. Were those temporary annoyances so terrible that they required sweeping and permanent federal regulations? Their malevolent Patriot Act and the nationalization of airport security are policies of power and repression, not security and safety. And of course the Republicans still support states’ rights as long as all fifty voluntarily obey.

The reality is that the Republicans started out as a party that pursued a mercantilist policy agenda, or what today would be called rent-seeking, where interest groups lobby government for special privileges such as monopolies, protectionism from international trade, and government contracts.4 The massive amount of corruption that occurred after the Civil War supports the contention that the Republicans are the mercantilist or rent-seeking party. The same can be said of the modern Republicans, who are dominant in campaign fundraising.

How did the Republican Party gain the reputation as a free-market, limited-government party? Part of the reason is simply that the Democratic Party adopted even bigger government policies, particularly with the election of Franklin Roosevelt and the subsequent New Deal.

Another reason is that the Republicans of the 19th century were labeled the party of "laissez faire" by historians for their policies that supported big business and led to the emergence of the so-called Robber Barons, but these were hardly the types of policies that would be advocated today as laissez faire by free-market economists or libertarians.

Another murky area of American history in the 19th century was the Greenback and Free Silver movements, which saw an influx of populism into the Democratic Party. Populists like William Jennings Bryan were protesting the severe scarcity of money and credit and the power of big city banks, but these problems were caused by federal control of money and banking, which made currency extremely scarce and loans difficult to procure. The Democrats were protesting against the effects of the federal regulation of money and banking that had been passed by the Republicans.5

Again history has been blurred into conformity with modern images. However, from the perspective of historical fact, the Republicans have not mysteriously switched positions with modern Democrats, but are simply switching fully back to their historical roots.

Robert Ekelund is eminent scholar emeritus at Auburn University. He is author of The Marketplace of Christianity (2006) and Economic Origins of Roman Christianity (2011), and co-author (with Mark Thornton) of Tariffs, Blockades, and Inflation: The Economics of the Civil War.