Law and Appeals in a Free Society 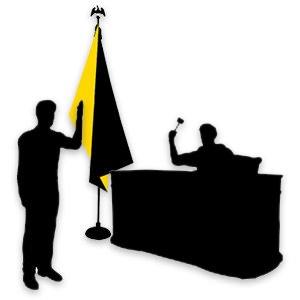 In my online Mises Academy class on private law and defense, one of the major student concerns was the process of appeal. In a statist society such as the current United States, if someone doesn't like the ruling of a lower court, he or she can appeal it to a higher court. However, the appeal process has a logical stopping point, at the Supreme Court.

But how would appeals work in a voluntary system of private law? Would defendants be able to appeal clearly outrageous convictions? If so, then what's to stop a murderer from indefinitely appealing his cases? With no single organization sitting at the top of the judicial pyramid, how could a market system of law come to any resolution on important cases?

How Private Law Could Work

In a previous essay, I walked through the mechanics of a private legal system. To recap: In a society lacking an institution of organized theft and violence — in other words, a state — people would still have disputes. These would range from honest disagreements between businesspeople over the terms of a commercial contract to heirs seeking justice against the killer of their family member.

In a civilized community, especially if it had a sophisticated market economy, people wouldn't want "vigilante justice" to be the norm. Instead, most people would want to reassure their neighbors and business associates that they were justified in the way they handled property.

For example, if I pull into my driveway one day only to see Thad the thief running out of my back door with a laptop under his arm, I personally might feel justified in marching over to his house and breaking down the door. That's my computer, and I'm taking it back! I would also feel justified in bringing a few of my burly friends with me, in case Thad and I have a failure to communicate.

But in reality, it would be foolish for me to act like this, at least if my neighbors in this hypothetical scenario were anything like my actual neighbors in the real world. They couldn't be sure that Thad had really stolen the laptop, especially if he runs around accusing me of breaking into his house with my fellow gang members.

Now we see the quite pragmatic function of disinterested judges. Without a state monopolizing the industry, in free-market anarchy private judges would offer their services. In my scenario, I might present Thad the thief with a list of ten reputable judges in the area, who all specialized in cases of burglary. I would tell Thad that I had the original receipt for the laptop (with its serial number), and that I had caught him on my home surveillance system. I would then invite Thad to pick any of the judges he wished, and we would go to court.

If Thad agreed, then we would give our testimony, perhaps call character witnesses, and so on, according to the procedures of the judge that Thad and I had both chosen. The judge would tailor his procedures so that his or her "opinion" on the matter would be likely to accord with the notion of justice held by at least a fraction of the community. Remember: in a system of private, voluntary law, plaintiffs and defendants aren't assigned to a particular judge because of his "jurisdiction."

On the contrary, judges would compete with each other to attract clients. This is why private judges — in contrast to elected or government-appointed ones — would have much greater incentives to give fair rulings. If any private judge were caught accepting a bribe, or gave a particularly outrageous ruling, he would probably be ruined. At least one of the parties to a future dispute would be afraid to submit to this judge's ruling, and so would opt for a competitor.

But what if Thad didn't agree to any of the judges on my list? Suppose he recommended instead that we use his brother-in-law, who was actually a car mechanic but, according to Thad, "is a really stand-up guy"? Obviously every reasonable person in the community would see that Thad almost certainly was a thief, and that I was telling the truth. If I went to a reputable judge and presented my case against Thad in his absence, and if the judge agreed with me, then the community would have little sympathy for Thad if I went with professional repo men to retrieve my laptop from Thad's house.

What about Appealing a Ruling?

In legal cases, it's important to remember that a judge is writing up his or her opinion. Especially in voluntary, private law systems, it would be clear that the judges — who gave expert guidance on what the law says on a matter — are distinct from the people enforcing the law. Because modern governments monopolize the court system and control the strongest enforcement agencies (i.e. the police and army), we often lump these institutions together.

But in free-market anarchy, the companies providing judicial opinions would not necessarily be the same ones maintaining armed personnel to ensure compliance with those opinions. (In fact, it would probably be profitable for these agencies to remain distinct, for the very reason that it would reassure customers.)

But back to our story. What would happen in the following scenario? Thad agrees to one of the judges on my list. We both present our evidence. I show the receipt for my computer, and I show the surveillance footage on the day of the burglary. I also testify that I personally witnessed Thad running out of my house.

But for his part, Thad claims that he couldn't possibly have done it, because he was watching a football game at a local bar at the time I pulled into my driveway. Unfortunately, Thad was by himself, and the bartender — though he recognizes Thad as a regular — can't be certain that Thad was actually in the bar at that precise time.

Now if the serial number on the laptop matches my receipt, and if my home surveillance footage clearly shows Thad's face, we can be confident the judge would rule in my favor. Thad might then shop around, trying to get other judges (from my initial list) to hear his case on appeal. But they would look at the evidence and tell him, "Sorry son, I would end up ruling the same way. Don't waste your time and money hiring me to hear this case."

However, let's tweak the scenario. Suppose that I didn't have such smoking-gun evidence. Perhaps the laptop couldn't be found, and so the only evidence against Thad was my word, plus some video footage that featured a guy who looked like it could be Thad, but it wasn't clear because he had on a ski mask.

During the trial, again suppose that Thad couldn't establish an alibi. And perhaps the judge would rule in favor of me. But then after the trial, suppose new evidence comes to light: Thad remembers that he had stopped at an ATM before hitting the bar to watch the game. The bank checks its records and cameras, and yes! Someone withdrew money with Thad's debit card 15 minutes before the time Thad claimed to be at the bar, and the camera inside the ATM confirms that the person was in fact Thad.

Now Thad has a solid ground for appeal. He shops around and several judges say they will definitely be willing to retry the case, because the original ruling is now suspect. Thad would come back to me and offer me the list of these judges, where again all of them were experts in burglary law, and all of them had had plenty of experience hearing cases on appeal.

If I didn't agree to any of them, the roles would be reversed: Thad would go to the most reputable, and have his case heard in my absence. Assuming the judge gave his opinion that Thad should be acquitted, the community would probably now assume that Thad had been innocent all along. If at this point I tried to hire a group of burly repo men to break down Thad's down, no reputable company would agree to my request. They would lose goodwill in the community, because they were helping to "enforce" a ruling that had clearly been overturned.

Where Does It End?

In the above section, I sketched out the basics of how appeals might work in a commercial society based on voluntary relations. As we saw, there wouldn't need to be some arbitrary rule, specifying (for example), "You get two rights of appeal in a civil case, and four rights in a criminal." I think it is a mistake for anarchocapitalist theorists to try to centrally plan the structure of an entire legal code. Just as we can't really predict how a free market in education or the media would turn out, we also can't predict what a free market in judicial rulings would look like.

Of course, the professional judges in a region would surely reach agreements with each other regarding appeals. Over time, standard procedures would be developed. The goal of course (from the judges' viewpoint) would be to attract customers.

Keep in mind that in a system of private law, the potential clients of a judge want two things: On the one hand, they want a resolution of the issue. So if the judges all had interlocking agreements, such that the loser in a trial could appeal the outcome for years on end, then people in a dispute wouldn't bother going to court in the first place. They would know that hiring outside judges wouldn't actually help them settle the argument and get on with their lives.

On the other hand, the potential clients of a judge would want some method of appeal if new evidence really did come to light after the trial, or if something really outrageous happened during the trial. In other words, the disputants would agree with each other, "Okay, we obviously aren't going to settle this conflict on our own. Let's take our case before Judge Brown, whom we both know has delivered very fair rulings for more than a decade, in cases just like ours. We both agree to abide by his opinion, unless something really nutty happens, like Brown says that aliens communicated with him and that's why he's siding with one of us in the lawsuit. Obviously in that type of situation, we're not morally bound to abide by his ruling, and the loser will naturally appeal and try to find a different court to hear the case."

It is very difficult to imagine a society with no centralized institution claiming to be the ultimate arbiter in all legal disputes. Most people just assume that we need a state in order to have the rule of law.

Yet in practice, we see that government officials belong to the most criminal and "lawless" profession around. Once we understand the basics of how a private legal system could work, the typical objections to a truly free society begin to fall away.