Give Capitalism a Chance | Mises Institute
Skip to main content

Give Capitalism a Chance 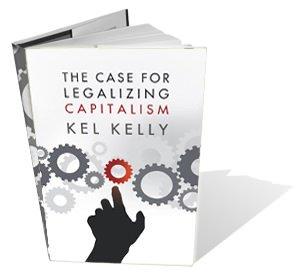 It is a common assumption in today's world that capitalism is, at best, out of control and, at worst, outright evil. Everyone knows that it causes most of our financial, economic, and social problems, and that we need a referee — the government — to make sure that all is fair and that we innocent citizens are not taken advantage of by predatory companies and capitalists.

The fact, of course, is that everyone is wrong.

My urgent goal in writing The Case for Legalizing Capitalism was to create a one-stop refutation of all anticapitalist arguments, using plain economic logic and applying free-market (i.e., classical liberal) arguments and economic laws to today's political scene, across the entire political-economic spectrum. In short, the goal was to condense the world of the Mises Institute into one book.

During my study of free-market economics over the years, it occurred to me that this fascinating, economically sound reasoning for how the world really works and what would genuinely help our lives was widely discussed in the procapitalism, academic-type world, but that the general public was wholly unaware of these astounding insights.

My main message is that most of our economic problems derive from previous government intervention in the economy. In its attempts to "help" us, the government has managed and regulated the economy, and passed laws that sounded constructive but that in fact hurt the economy and us.

Political economic reality is replete with the law of unintended consequences. Our economic problems are the natural result of political forces, not the natural result of (supposedly evil) market forces. We have voted our current problems into existence by electing politicians who promised to help us by means of economic intervention and regulation.

As Austrians know, most people believe we have free markets, but we have no such thing. This is true regardless of the fact that politicians of all stripes — and most of the media — claim that we do. The government has its hand in every company and every industry in the nation, controlling what things are produced and by which means. Indeed, it even manipulates market prices and production directly.

Left-wing pundits ridicule those who label such government manipulation and control "socialism," but it is in fact just that. Socialism involves government control of the means of production, and its real purpose is redistributing property for the benefits of "society" (society being receivers, not givers). Controlling production and redistributing wealth are precisely the goals and justifications of our government's constant intervention in the economy.

But this constant "helping" through attempting to "manage" has resulted in a constant decline in our ability to produce real wealth and thereby to improve our standards of living. As it is now, we are seeing a consistent increase in the wealth of the rich, a moderate improvement in the wealth of the middle class, and stagnation in the living standards of the poor. As has happened to other countries at various points in history, we are now on the verge of retrogressing economically.

Consider this remarkable irony: most citizens put their faith in government — the entity that steals from us, causes wars, imprisons and starves innocent citizens, and is an absolute monopoly — to provide for us and keep us safe.

At the same time, they see businesses — which have eradicated diseases and starvation, engaged in peaceful exchanges instead of war, produced virtually everything we currently own and enjoy, paid us our wages and provided capital for us to improve our productivity, all the while being fully restrained by hungry competitors (in free markets) — as our enemies from whom we need protection. These commonly held but irrational prejudices for government and against businesses form the very foundation of the political arguments espoused by professional anticapitalist "thinkers."

And yet, when capitalism has been allowed to flourish to even a moderate degree, it has succeeded in improving the lives of all involved — rich, poor, black, white, man, or woman. Only capitalism, with its true free markets and true freedom for individuals can solve our economic problems and bring prosperity.

"Capitalism" is neither the Right-wing, crony-capitalism corporate-welfare economy, nor the anti-rich, wealth-redistribution social-welfare economy that we have today. In a truly capitalist society businesses never receive money or special privileges from government: they succeed if they please consumers in offering them what they want, and they fail if they do not. By the same token, in a truly capitalist society, individuals never receive special privileges or transfer payments. Instead, they have an abundance of jobs and of wages commensurate with the value of their work (more than a "living wage").

Real economics (i.e., free-market economics) proves that under capitalism, it is virtually impossible for things like inflation, shortages, booms and busts, recessions, unemployment, starvation, and unaffordable healthcare to exist. Competition and the threat of competition serve as iron-clad shackles on companies. On the one hand, it prevents them from underpaying, overcharging, or under-supplying. On the other hand, it assures that they guarantee the safest, lowest-priced, highest-quality products that can possibly be produced at any particular state of technology and development.

"When capitalism has been allowed to flourish to even a moderate degree, it has succeeded in improving the lives of all involved — rich, poor, black, white, man, or woman."

The Case for Legalizing Capitalism begins with the economic basics, explaining labor, production, exchange, savings, trade, and economic progression. In the process, many common anticapitalist arguments are disproven — that labor is exploited, that some involuntary unemployment is "natural," that outsourcing is harmful, that we should "buy American," that we need "energy independence," that sweatshops and child labor should be extinguished, that there is an economic threat from China, and that jobs or companies should be protected.

In the second section, having laid out a solid explanation of how free markets work, I analyze how government has interfered in the marketplace and caused the very problems for which the free market is commonly blamed. Banking and the business cycle are given a thorough examination so as to demonstrate that our government-sponsored banking system is artificial, unnecessary, and the sole source of our economic crises and recessions.

Plus, I explain why our most screwed-up industries — including healthcare, airlines, and oil — function so ineffectively, and why regulations such as price controls, government-granted monopolies, the restriction of production, and the prevention of business competition and of free exchange between enterprises and consumers only harm consumers (i.e., all of us), while benefiting select government-favored companies.

In the third section I compare the historical results of government management versus free markets. I look at several "case studies" of relatively free markets that were ruined by government manipulation and control, including the Great Depression, the fall of the Roman Empire, and the transition of various countries to communism.

Then, through comparisons of free versus unfree countries from an empirical and statistical viewpoint, I show the direct correlation between free markets and higher standards of living. Also in this section, I examine the concept of the evil corporation in order to reveal that corporations — unless given the power by government to do so — can not only not harm us but can only benefit us.

In the fourth section I take a deep dive into several special topics: morality, war, and environmentalism. A core tenet of leftists' promotion of socialism is that it is moral, while capitalism is immoral. Not only do I show this is completely opposite from the truth, but I reveal that socialists are hypocritical, dishonest, thieving, and harm those they are supposedly trying to help (usually themselves). In a large subsection, I address the causes of and solutions to poverty in detail.

The notions that most wars are needed, that they keep us safe, and that they are justified, are, through historical examples, carefully disproven. In addition to providing a strong case for secession of individual groups or geographical areas from their current national rulers, I also develop original arguments advocating antipatriotism and the intentional dismantling of individual countries, including our own.

Finally, due to popular "green" sentiments that threaten to halt or reverse our economic progression, I lay out the case that, first, the environment is in better shape than we think (and improving!), and that, second, whether global warming is real or not, we will be better off through increasing, not decreasing, carbon emissions.

In the final section of the book I put together all the knowledge obtained thus far so as to enable the reader to assess our current social and economic policies as well as the current misguided world view of anticapitalism. I refute Keynesianism's basic and most important arguments — including the idea that GDP is a relevant economic indicator — showing that the world works in opposite fashion to what most recognized economists today argue. Finally, I explain popular news headlines/stories in terms of their real political and economic significance — insights that are usually obscured due to a lack of economic knowledge on the part of both writers and readers.

Major running themes in the book include such notions as

Most importantly, I argue that if we citizens better understood real economic cause and effect, we would not only have the power to demand beneficial policies from our politicians, but, because they will give us whatever we want if we put them in power, we could actually compel them to allow freedom and thereby improve the lives of everyone.

I hope that you enjoy the book, that it brings some true "enlightenment," and that it serves in some degree to help turn the tide against the destructive anti-human-progress thinking so prevalent in today's world.

Kel Kelly is the Head of Economic and Commodity Research at an international energy and agribusiness firm. He is the author of The Case for Legalizing Capitalism. He lives in Atlanta. Send him mail.