Fascism Is a Current Political and Economic System 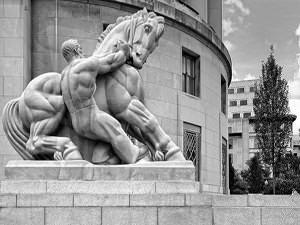 Lew Rockwell offers us in Fascism vs. Capitalism a provocative and insightful diagnosis of the political and economic ills of our time. The situation that we face, he says, is dire; but, fortunately, he does not leave us without remedy. To the contrary, the wisdom of Mises, Rothbard, and their colleagues in the Austrian School offers the means to rescue us, and the inspiring leadership of Ron Paul shows us the way to put their ideas into practice.

As the book’s title suggests, Rockwell finds “fascism” to be the key concept needed to analyze the modern American era. He is quick to deflect an objection:

“Fascism” has become a term of general derision and rebuke. It is tossed casually in the direction of anything a critic happens to dislike. ... But fascism is a real concept, not a stick with which to beat opponents arbitrarily. The abuse of this important word undermines its true value as a term referring to a very real phenomenon, and one whose spirit lives on even now.

What, then, is fascism? To Rockwell, it is an aggressive nationalism and imperialism, together with domination of the economy by the state.

The state, for the fascist, is the instrument by which the people’s common destiny is realized, and in which the potential for greatness is to be found. Individual rights, and the individual himself, are strictly subordinate to the state’s great and glorious goals for the nation. In foreign affairs, the fascist attitude is reflected in a belligerent chauvinism, a contempt for other peoples, and a society-wide reverence for soldiers and the martial virtues.

To what extent does this conception of things apply to contemporary America? Rockwell demonstrates in detail that it applies all-too-well. Following one of his great predecessors, the Old Right stalwart John T. Flynn, he distinguishes eight “marks of fascism,” and for each one he illustrates its contemporary relevance.1 We have space to discuss only a few of these, but the reader is urged to read Rockwell’s complete discussion to grasp fully the strength of his analysis.

When the ordinary person thinks of fascism, he probably identifies it with the cult of the Leader, in the style of Hitler and Mussolini.

I [Rockwell] wouldn’t say that we truly have a dictatorship of one man in this country, but we do have a form of dictatorship of one sector of government over the entire country. The executive branch has spread so dramatically over the last century that it has become a joke to speak of checks and balances. What the kids learn in civics class has nothing to do with reality. ... As for the leadership principle, there is no greater lie in American public life than the propaganda we hear every four years about how the new president/messiah is going to usher in the great dispensation of peace, equality, liberty, and global human happiness. The idea here is that the whole of society is really shaped and controlled by a single will — a point that requires a leap of faith so vast that you have to disregard everything you know about reality to believe it.

The increased power of the executive branch has been accompanied by a policy of militarism and war.

Ronald Reagan used to claim that his military buildup was essential to keeping the peace. The history of US foreign policy just since the 1980s has shown that this is wrong. We’ve had one war after another, wars waged by the United States against noncompliant countries, and the creation of even more client states and colonies.