The Education Bubble Is Fuel for Revolt 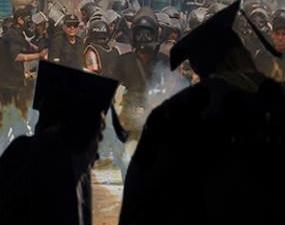 Would you like your college education to be free? Sure, who wouldn't? Well, the people of Tunisia and Egypt are learning that whenever the government supplies something, it is never really "free."

In Tunisia, "free" university education is guaranteed to anyone who passes the government's exams at the end of high school. Largely as a result of this, the number of Tunisians who graduated college more than tripled in the last ten years. This may sound like a good thing, but it has produced a glut of graduates.

Fifty-Seven percent of young Tunisians entering the labor market are college educated. This is while only 30 percent of Americans earn a college degree by the time they are 27. Recent Tunisian college grads have an unemployment rate approximately three times higher than the national average of 15 percent. This is up ninefold from 1994.

The reason for this is not necessarily because having a college education hinders people in getting a job, but because so many college grads are entering the labor market at a time when there are few jobs.

Additionally, government domination of the educational system discourages economic growth. The Tunisian Ministry of Education decides what major students will have. Students are not allowed to change fields during their course of study. This control reduces the type of expertise necessary to create successful businesses.

The Tunisian educational system is also enormously expensive. Of Tunisia's GDP, 7.2 percent is spent on education, more than any European or North American country beside Denmark and Iceland, which also spends 7.2 percent of its GDP on education. Tunisia's educational results, however, appear to be horrible. A 2002 UNESCO report puts its graduation rate at about 30 percent.

Having such a large number of unemployed youths can be dangerous. As George Mason University sociologist Jack A. Goldstone notes, "Educated youth have been in the vanguard of rebellions against authority certainly since the French Revolution and in some cases even earlier."

In fact, the Tunisian protests began after a recent graduate killed himself because government authorities confiscated his fruit stand when they discovered he did not have an "official" permit. The BBC reported that most of the early protesters were unemployed recent graduates.

Like Tunisia, Egypt also has a massive youth-unemployment problem. Unsurprisingly, it also has a system of "free" college education.

The Egyptian government also rigidly controls the educational system, just like in Tunisia. A centralized government committee controls decisions regarding curriculum, program development, and deployment of faculty and staff for institutions of higher learning across the entire country. Private universities were only legalized in 1992, and enrollment is very small.

In Egypt, educational expenditures were 3.7 percent of GDP in 2007. By most accounts the Egyptian education system is underfunded. Its educational standards were called "abysmal" by the Economist. Fewer than half of all students graduate, and many universities are viewed as diploma mills.

Although the Egyptian government may have avoided some of the economic costs of "free" higher education that the Tunisian government has incurred, it has not avoided the social costs.

We, in America, might not be as far away from the problems of Tunisia and Egypt as some may be inclined to think.

From 1997 to 2007, full-time enrollment in US tertiary education increased 34 percent. The average college student graduates with $24,000 in debt, a 40 percent real increase from 1997. In 2008, only 57 percent of students enrolled in a four year college graduated within six years. The unemployment rate for 16 to 24-year-olds is 52 percent. The underemployed as a group may be as large as the unemployed in America. For example, in 1970 only 3 percent of mail carriers had a bachelor's degree, while today the number is 12 percent.

Although our case may not be as extreme as that of Tunisia or Egypt, we are headed in the same direction. And just like in Tunisia and Egypt, our education bubble is fueled by governmental policy.

Government accreditation laws keep potential institutions of higher education out of the market, which allows the institutions already in the market to raise their prices. Accreditation institutions can also force institutions of higher education to make changes that increase costs. For instance, the American Bar Association forced the University of Colorado Law School to increase the number of electrical outlets in the library and to construct an instructional court room, which the university claimed caused them to increase tuition.

Also, if a student defaults on a loan backed by the government, which is by far the most common kind of loan, the lender does not bear the loss, the government does. This obviously encourages the lenders to lend more freely than they otherwise would. Enormous losses have been socialized. There is currently $730 billion of outstanding student-loan debt, and the overwhelming majority of losses will be borne by the government if it is not repaid. Only 40 percent of all student debt is being actively repaid.

There are more causes to the revolutions in Tunisia and Egypt than just the higher-education bubble, but the effect it has had cannot be ignored. We could be bringing ourselves dangerously close to the point when all the people of our country have to learn, one way or another, that nothing the government provides is ever free.

Joshua Fulton holds a B.A. from NYU, and an MFA in Creative Writing from UNC, Wilmington. He also co-organized the first successful citizens' ballot initiative in North Carolina in the last 10 years. His website is: AbsorbYourHealth.com.