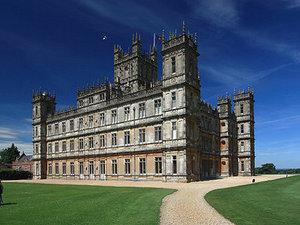 Season five of the smash hit British period drama, Downton Abby, begins in six weeks. The series continues the fictional story of the aristocratic Crawley family and the family’s friends, relatives and servants set in and around the Downton Abbey estate. The series recounts the day-to-day lives impacted by all the great events of the early twentieth century from the sinking of the Titanic through the aftermath of World War I and beyond.

An Even-Handed View of the Aristocracy

A key general theme is the vast disparity in wealth between the aristocratic family and the lowly servant class. The irony is that the people in the aristocratic family and their servants seem oddly equal in terms of both abilities and flaws. The series is not an indictment of the aristocracy, which is why the left hates it. For example, Salon recently published a hit piece on the show. “The show depicts a group of actual monsters in a manner that’s explicitly loving,” the article opines. “[W]hen the facts get in the way, they’re disposed of. Downton Abbey is a show about how the world was straightforwardly better when an entrenched class system ruled.”

“Actual monsters”? The idea that there are no decent people in an aristocracy is just nonsense and so is the idea that the show depicts the characters unrealistically. In truth the Crawley family is portrayed as vulnerable, somewhat inept, increasingly irrelevant, and often forced to adapt to change against its collective will.

Other commentators have seized on this realism. For example, Jerry Bowyers of Forbes finds the show reasonable and realistic, and that the aristocrats are flawed but admirable. He even concludes that the show portrays an anti-class-warfare message, which is another reason the left hates it and the masses love it. John Tamny’s exploration of series creator Julian Fellowes’s ideology reveals an insightful and complex thinker and one that points us in the direction of libertarianism rather than conservatism, which also helps explain the show’s great popularity.

The plot is largely driven by secrets. One episode might be based around a servant who has a secret on another servant. Another episode might be based on one member of the aristocratic family having a secret about another family member or friend. The juiciest secrets are often secrets held by a servant about one of the family members. However, the dirtiest secret about Downton Abbey is not fictional and has never been told before. The secret reveals the true nature of the state, whether it be aristocratic, democratic, or dictatorial.

The Origins of the Titled Aristocracy

The actual setting for the show is Highclere Castle, which is used for exterior and interior shots of Downton Abbey. Highclere is the estate of George Herbert, the 8th Earl of Carnarvon (third creation) and his wife Fiona Aitken.

The dirtiest secrets of the real-life Downton Abbeys of the world can be better understood with an examination of the 1st Earl of Carnarvon (second creation) James Brydges, and how such aristocracies came to be in the first place.1

[I]f a prince at the head of an army has conquered a country, he will distribute the lands among his officers or favorites according to their merit or his pleasure. He will then establish laws to vest the property in them and their descendants.

This pretty much explains how the original English aristocracy came into being and how James Brydges became the 1st Earl of Carnarvon. Brydges was born into a low-level aristocratic family and became a Member of Parliament, largely through bribery, around age 25. He then used this position to impress and curry favor with the ruling political elite. His political influence continued to grow and he soon was appointed Commissioner of the Admiralty.

His next appointment was the lucrative position of British Paymaster General. He held the military purse strings during most of the War of Spanish Succession (1701–1714). It was this position that allowed Brydges to become fabulously wealthy and to be able to purchase several more high-ranking positions in the English aristocracy. Biographers Collin and Muriel Baker called him the “most successful war profiteer in that age.”

Biographer Joan Johnson draws attention to records that indicate that Brydges “was the most surprising instance of a change in fortune … in any age. When he came first into the office of Paymaster of the army, he had little or no estate of his own … but by means of this office … in little more than ten years, living expensively too in the meanwhile, he had accumulated a fortune of not less than six or seven hundred thousand pounds.” This would be the equivalent today of over $1 billion!

Government “Service” as the Way to Wealth

Using political offices for self enrichment was as common then as it is today. Brydges merely surpassed all others of his time period and of course wartime is the perfect time for feeding at the public trough. The two main tools at his disposal were the budget of his office, which was enormous. He received his full budget at the beginning of the year so he had access to vast sums of money. He also had insider information about the war on the continent because he was one of the first to know the location of armies, the outcomes of battles, and the requirements of the troops. He therefore had a vast amount of capital to invest and the critical insider information with which to invest it. Plus he could legitimately collect fees and take advantage of swings in exchange rates.

Here enters the previously-mentioned economist, Richard Cantillon. He came from a dispossessed Irish Catholic family some members of which were fighting on the side of Spain and France in the War of Spanish Succession. Other members of his family operated banks on the European continent. Cantillon’s uncle was a banker in Spain who no doubt initiated the effort that resulted in Richard being hired by Brydges as his agent in Spain.

Cantillon developed what was a “two sets of books” accounting system whereby Cantillon would use money obtained from Brydges through his uncle’s bank to purchase supplies and materials for Brydges’s personal account. These goods would then be marked up in price and resold to the Paymaster’s account. With war raging and communications greatly diminished it was fairly easy to widen the spread between the two accounts and amass a huge fortune.

It was a safe bet on Brydges part that Cantillon would keep Bridges’s secrets because the British had invaded Cantillon’s country and taken possession of his family’s estates in Ireland. To seal the deal, Brydges helped set up Cantillon in the banking business in Paris after the war.

Brydges finally relinquished his office as Paymaster when the Peace Treaty of Utrecht was signed in 1713, making further work in the office unprofitable. Brydges was accused of wrongdoings and embezzlement in office, but was never brought to trial or convicted for his crimes. Having amassed a vast illicit fortune we can gain a clearer sense of his character by what he did with his wealth.

Not a True Meritocracy

As Cantillon indicates, the aristocracy is established by a conquering King who claims title to the conquered land. The land is then subdivided among his generals and friends who manage their estates and pay taxes to the King. The aristocracy is therefore not a true meritocracy, but quite the opposite. These positions are obtained by being good at killing, corruption, and court intrigue. The pomp and circumstance of the aristocracy is designed to mislead the public about the true nature and origins of the privileged class.

It should not be surprising that Brydges was a man of bad character and limited abilities. Johnson notes that outside of holding aristocratic and political positions, Brydges could not compete in a world that was growing more competitive and that he “had none of the necessary shrewdness, ruthlessness and staying power for this” (i.e., entrepreneurship). “The results of his undertakings only rarely measured up to the effort he put into them or impressed his contemporaries.”

Johnson goes on to note the narrow-mindedness of Brydges by noting that he “did not concern himself with philosophical moralizing or political and economic theories. He was essentially a realist, living in the present and rather like Walpole whom he admired, he had no lofty ideals that might have made him stand out among his contemporaries. His successes were material ones and his influences limited to his own immediate circle, so that his death caused few ripples beyond his circle.” It is exactly this “living in the present” lifestyle that led Brydges to eventually exhaust the vast fortune acquired as a war profiteer.

The dirtiest secret of the real-life Downton Abbey is that it was established with the ill-gotten gains of a corrupt and conniving spendthrift, James Brydges, the 1st Earl of Carnarvon. War may be the health of the State. However, let it also be said that not only does it bring out the worst in us, it also raises up the worst among us. The underlying issue is not so much class warfare, but real warfare. War is destruction and theft on a massive scale. It enriches the State and its minions at the expense of the productive class.

Whether aristocratic or democratic, the administration of the State matters little. Power, theft, war, and plunder is what really matters. That is the dirtiest of all secrets.