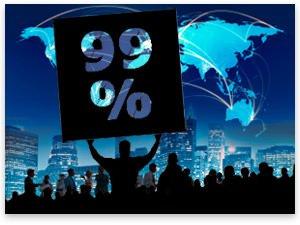 Tags Free MarketsWorld HistoryHistory of the Austrian School of EconomicsInterventionism

[Free Market, January 2012. You can subscribe by becoming a member.]

"We are the 99%!" This slogan of the Occupy Wall Street protesters has been called the most memorable quote of the past year. Those who rally to its cry do so in opposition to the villainous 1%.

For a handful of the protesters, being a member of the 1% means being a wealthy recipient of a government bailout, or some other form of corporate welfare. But for the economic egalitarians in their ranks, it simply means being too rich. They say the wealthiest 1% of the country are getting more than their fair share of the wealth in society, at the expense of the 99%.

Whatever one thinks of the current plight of the 99%, throughout almost all of history, things were much worse for the vast majority of the population. In precapitalist ages, the average member of the economic 99%, if lucky enough to survive infancy, was consigned to a life of back-breaking work and poverty, constantly on the verge of famine, disease, and death.

The only individuals who did not have such a wretched life were the "1%" of old. This economic 1% was virtually identical with the state. It was made up of the French kings, the English lords, the Roman senators, the Egyptian viziers, and the Sumerian temple priests. The members of this elite lived in Olympian splendor: servants at their beck and call, as much food as they could possibly want, spacious homes, an abundance of jewelry, and a tremendous amount of leisure time.

And of course, this lifestyle was borne on the backs of the masses. It was the 99% who produced the bread that stuffed the mouths of the 1%, who felled the trees to erect their mansions, and who mined the precious metals and stones to adorn their bodies.

Everything the Occupy Wall Street protesters say today about the 99% and the 1% was completely accurate then. Wealth in society was a pie of a certain fixed size. The bigger the slice of pie that the 1% took for themselves, the less was left over for the 99%. Every bit of luxury the 1% enjoyed was taken from resources that could have made some member of the 99% less miserable.

Why did the 99% of old put up with the 1% lording it over them? Why did they not rise up, and overthrow their masters? Were they simply cowed by the mailed fists and the flashing sabers?

No; as David Hume pointed out, since "those who are ruled" always vastly outnumber "those who rule," a regime's power can never be about brute strength alone. The ruled many must believe that the power of the ruling few is somehow good for them.

Perhaps the temple priests have convinced the people that the gods would be angry if the rulers were disobeyed: that the rains won't come, and the crops won't grow. Or maybe the populace believes that the rulers are responsible for the peace and order in society.

As Ludwig von Mises made clear, real power, what he called "ideological might," always lies in the support of public opinion. If public opinion were ever to turn on any regime, its days would be numbered.

Mises went even further to argue that public opinion not only determines who is in charge but the general character of the legal order, or as he put it, "whether there is freedom or bondage."

Ultimately the only kind of tyranny that can last is a tyrannical public opinion.

If the 99% are oppressed, they are also ultimately their own oppressors, by dint of oppressive public opinion.

So that explains the political situation of the old order (and all orders, for that matter). What about the economic situation? Why did the "economic pie" so rarely get bigger?

One would think that over time, people would get more efficient at producing things, and so living standards would improve. Yet, for millennia, things hardly got better at all.

The roots of this economic state of affairs are to be found in the political order described above.

Again, throughout most of the history of civilization, the ruling 1% took for itself a huge portion of what the 99% produced. And if any private person ever accumulated enough wealth for it to be noticeable, some potentate would snatch that too. This is why buried treasure was all the rage wherever princes were particularly grasping.

And that is basically why the 99% had such shabby lives for almost all of history.

Then in the 18th and 19th centuries, something revolutionary happened. A group of philosophers started thinking very carefully about property, trade, prices, and production. These philosophers were called "economists."

From considering the economic laws they discovered, the economists concluded that society is much more productive if private property is more consistently respected. "Laissez faire et laissez passer," the economists said. Let people control as much of their property as completely as possible, and everybody will be more prosperous.

These economic philosophers, people like Richard Cantillon, Adam Smith, and J.B. Say, were theorists. They wrote brilliant, if sometimes turgid, books that changed the minds of communicators: individuals whom F.A. Hayek called "secondhand dealers of ideas."

These included professional communicators: writers, like Richard Cobden, and speakers, like John Bright. These writers and speakers wrote pamphlets and gave speeches that changed the minds of many thoughtful, if less eloquent, individuals, who might be called amateur communicators. And this thoughtful stratum, in turn, led their nonthoughtful fellows (who, in modern parlance might be called "sheeple") to change their positions on public affairs.

Through this process, public opinion shifted toward the belief that government should be as limited as possible, and property rights as sacrosanct as possible: toward a doctrine called "liberalism."

And the results were miraculous. As never before in history, the productive energies of humanity were unleashed. Items that were once reserved for the elite 1% were soon mass produced for the 99%. Amenities that did not even exist before were developed, first for small markets, but ultimately for the mass market.

In the new order there was still a 99% and a 1%. But the 99% of this period lived better than the 1% of times past. And the chief way to ascend to the 1% was to become a successful capitalist-entrepreneur: to strive to serve the 99% (the masses of consumers) better than one's competitors.

In the old order, most would-be one-percenters, in order to get ahead in life, would have had to apply their smarts and ambition to become conquerors, rulers, and government administrators, and in those roles to exploit the masses. In the new order, under what Mises called the "consumer sovereignty" of the market, their capabilities were turned toward providing for the masses of sovereign consumers.

The liberal ideological revolution had engendered an Industrial Revolution. And what Mises called the "Age of Liberalism" lasted from 1815 to 1914: a golden century in which mankind first got an inkling of what it was really capable of.

Tragically, the Age of Liberalism was ended by an ideological counterrevolution: a wave of statist thinking that is responsible for all the woes of the 20th century, as well as our present economic and geopolitical crises.

Now, the 99%, under the thrall of unsound ideas, are once again oppressing themselves. Thanks to the calamitous state of public opinion, the ranks of the 1% are once again increasingly being filled, not by capitalist-entrepreneurs serving the 99%, but by the state and its cronies exploiting and impoverishing the 99%. And the redistributionist remedies that the self-styled 99% clamor for would only accelerate this trend.

If our civilization is to be rescued — if the tide of public opinion is ever to turn again — it will be thanks to the sound ideas formulated by theorists like Mises and the scholars who work in his tradition. But that can only happen if those ideas are effectively disseminated by a new generation of communicators.

This is why the Mises Institute and Mises.org are so vital. It is also why this generation's amateur communicators — who spread the message of liberty through Facebook posts, YouTube videos, and the like — are also hugely important.

The flowering of human society depends on two factors: the intellectual power of outstanding men to conceive sound social and economic theories, and the ability of these or other men to make these ideologies palatable to the majority.2

May sound ideas win the day, and may human society flower again.