Earlier this week, the Oxfam organization published a “report” about global inequality. It’s not really a report, since most of it consists of babble-economics with little empirical foundation, and the hard data that it includes comes from an external source: the Credit Suisse Report. In any case, this data indicates that there is a lot of poverty in the world, whereas in some other places there is relatively much more wealth. This has led to loudly shouted statements in the media of how 8 people in the world have more wealth than half of the world population combined.

The question remains: if you put 30 dollars into your bank account, does it mean that you caused extreme poverty for 10% of the world population? This is what Oxfam is implying in its biased pseudo-economic analysis.

Judging Oxfam by Its Own Standards

Oxfam does not practice what it preaches. It is a foundation, functioning on annual revenues and also various benefits from invested capital. They are no different than the regular company in the market, though one difference is that they formally do not pay out the dividends from their activity, but instead spend it on their projects. Yet they work — like virtually any other entity in the market — to expand their activity in a specific market, and maximize the value of their various assets. Let us see then what are the total assets in Oxfam United States’ division, assets per head, and “national income” per head — and see how that looks in comparison to the other countries.

According to their financial statement (p. 11) the total net assets of Oxfam US are around 69 million dollars (for all Oxfam branches around the world it is surely much bigger, but we merely want to make a point rather than do the world audit of the organization). As a legal entity it means that the American division of Oxfam, by itself, has accumulated the value of assets which is higher than in case of 99.7% of the whole world population. Some may say that it is a legal entity, not a person, but then: so what? Wealth is wealth, right? We are merely stating the obvious fact: Oxfam’s assets are already higher than 99.7% of the population. That's a pretty impressive concentration of wealth!

We can of course divide these assets per number of employees, which amount to 351 people. Per head the amount of assets is almost 200 thousand dollars. It is still more than 92.5% of the world population. 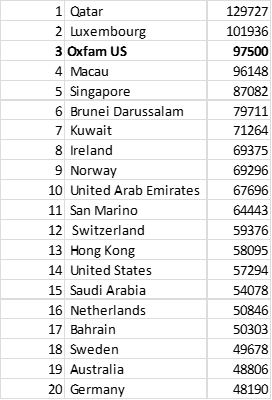 In the end we can also measure the sort of national income of Oxfam US. According to their statement salaries, compensation and other employee benefits are around 34 million dollars per year (38% of the budget). It basically means that national income per head is almost 97,500 dollars annually. This means that Oxfam US is the third richest country in the world. Only Qatar and Luxemburg are richer. Oxfam US easily leaves behind Kuwait, Singapore, Norway, Switzerland, the US, and Sweden, among others. Sounds like a great place to live in: “creating lasting solution to global poverty, hunger and injustice” is especially working for the one doing it.

Now, obviously we are playing with a demagogues’ arguments. Oxfam itself must resort to this demagoguery for the simple reason: just because someone is rich, and the other one is poor, it does not mean that one is causally linked to the other. Faced with a notion of how rich they are, Oxfam would probably counterargue: but we hire valuable people, we have to employ the smart ones, we are running a company.

Precisely! Just like those 8 people which have more wealth combined than the other half of population. Among them we have Zuckerberg, who created the most popular media platform in the history of exchanging ideas, Jeff Bezos, who created one of the most effective retail platforms in history, or Bill Gates, whose contributions to the computer business are numerous (oddly, Gates is one of the main donors of Oxfam). These great entrepreneurs did more to increase wealth of millions of people than Oxfam ever will.

We need more entrepreneurs like those 8 individuals to fight poverty and increase social wealth. Fortunately this is what has been happening for the poorest regions around the world. Ironically, Oxfam confirms that by reporting (p.12) that from 1988 to 2011 people from income deciles from 1 to 8 globally have experienced much higher income growth rate than people from ninth and tenth deciles, including the infamous 1%.

In any case — those eight richest people in the world are not curtailing the poorest ones. Actually, the opposite, they create a bigger platform for future growth for everyone.

It is time for Oxfam to finally realize that society is not necessarily a zero sum game. It can become one when the government is taking away the money from A and giving it to B. Yet in the marketplace this is not the case. Marketplace creates additional value, it does not take it away from someone to give it to someone else.

The interpretation that Oxfam has given to data gathered by Credit Suisse is based on horrible economics. They of course know this intuitively, because they themselves own a lot of money in the assets that they employ. Why do this? Why concentrate millions of dollars in form of assets, while there is so much poverty in the world? Apparently they believe in some form of value creation, which can be achieved by concentrating, owning, and managing those assets. In other words, they praise their private property and try to make a wonderful use of it.

Guess what, Dear Oxfam, this is precisely what successful entrepreneurs do. You would not believe how many of the mass produced things you can purchase cheaply because of this.

Mateusz Benedyk is the president of Mises Institute of Economic Education based in Wrocław, Poland. He is an economist and a historian, and was a Summer Mises Fellow at the Mises Institute in 2012.

Who Owns Federal Reserve Losses and How Will They Impact Monetary Policy?

Mateusz Machaj is Assistant Professor in Economics at the University of Wroclaw. He is the...

Mateusz Machaj on the Structure of Production in Economic Theory, and the Political Philosophy of the Star Wars Prequels