On 10 March 2016, European Central Bank (ECB) president Mario Draghi gave rise to expectations that the monetary authority could, at some stage, issue helicopter money. The latter basically denotes a free handout of new money to, say, consumers, corporates and public sector entities. Why would the ECB want to do such a thing?

There is concern that the euro area banking sector is no longer willing or in a position to churn out ever more credit and money. It is therefore feared that the euro area might fall into deflation; that is, a period of falling prices, accompanied by declining production and employment. This, in turn, could endanger the entire euro-project.

Helicopter money, some economists say, could prevent such an outcome. The ECB just needs to print up new money and hand it over to ‘those in need’. The new money will then be used for purchasing goods and services. This, it is said, will support nominal incomes: It will lead to higher goods production and/or higher goods prices.

Money Creation: Who Wins, Who Loses

Things are not so simple, however. Any increase in the quantity of money leads to a redistribution of income and wealth among people. The first receivers of the new money can buy goods at still unchanged prices, while the later receivers can buy goods only at already elevated prices. The former will therefore become richer at the expense of the latter.

Who should get the new money first? And how should the handouts be gauged — on a per capita basis, per income, or per bank account? Whatever criterion will be chosen, the allocation of the new money will be an arbitrary affair. Even if all people would enjoy the same proportional change in their money holdings at the same time, they will be affected differently.1

The latest interest in helicopter money is closely related to the problems created by today’s fiat money regime. Fiat money is produced through credit expansion, and it makes the economy’s overall debt grow in excess of income. As a result, the debt-to-income ratio keeps climbing, sooner or later bringing about a situation of over-indebtedness. 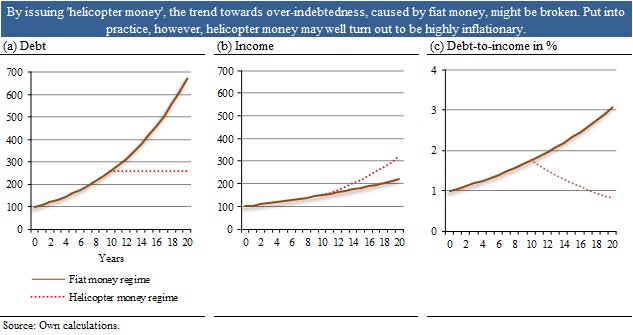 One may hope that helicopter money can put an end to the unfavorable debt dynamic caused by fiat money. First, replacing credit-based money creation by helicopter money might prevent the economy’s debt load from rising any further, while upholding a "sufficient" inflow of new money into the economic system.

Second, the new money injection ramps up nominal incomes. Keynesian-minded economists would argue that the monetary increase will induce higher goods production. Economists of the Austrian school, however, would hold a rather different view: namely that the injection of new money will merely result in higher prices.

The central bank will become under increasing political pressure to give money handouts to a growing number of "people and industries in need" — and never will the increase in the quantity of new money be sufficient to meet the demand for money. It is therefore not too far-fetched to assume that helicopter money creation would easily spin out of control.

This is what happened in the French Revolution period, when the government decided to issue assignates and, later, mandats — unbacked paper monies, meant to support government finances and kick-start economic activity. These monies represented helicopter monies and failed miserably, resulting in hyperinflation in 1796 and a breakdown of the economy.

Once the revolutionary government in France decided to give out assignates, nothing could contain its further issuance. In his book Fiat Money Inflation in France (1896), Andrew D. White notes in this context:

[T]he old cry of a "scarcity circulating medium" was not stilled; it appeared not long after each issue, no matter how large. But every thoughtful student of financial history knows that this cry always comes after such issues — nay, that it must come, — because of obedience to a natural low, the former scarcity, or rather insufficiency of currency recurs just as soon as prices become adjusted to the new volume, and there comes some little revival of business with the usual increase in credit.3

In view of the economic catastrophe caused by hyperinflation as a direct consequence of ever greater issuances of unbacked paper money, White observes:

The acute suffering from the wreck and ruin brought by assignats, mandats and other paper currency in process of repudiation lasted nearly ten years, but the period of recovery lasted longer than the generation which followed. It required fully forty years to bring capital, industry, commerce and credit up to their condition when the Revolution began, and demanded a "man on horseback," who established monarchy on the ruins of the Republic and threw away millions of lives for the Empire, to be added to the millions which had been sacrificed by the Revolution.4