GET NEWS AND ARTICLES IN YOUR INBOXPrint
A
A
Home | Wire | Central Bank Roundup: More Rates Moving Toward Zero

Earlier this week, the Reserve Bank of Australia, the country's central bank, lowered its key interest rate from 2.0 percent to 1.75 percent, which is a record low.

Australia is about equal to the State of New York in terms of both population and the size of its economy, so it's not an irrelevant economy, and the Australian bank's latest move is just another example of the trend among the world's advanced economies to push interest rates down to record lows.

Last month, New Zealand's central bank also moved its target rate down to a record low of 2.25 percent. although New Zealand's economy is much smaller than Australia's — about equal to Kentucky's economy — it's just yet another high-income country where the central bank has intervened in what will be shown to be a vain attempt to prop up a stagnating economy.

Last year, Canada — with a sizable economy equal to that of Texas — moved its own key interest rate down to a near-record low of 0.5 percent. It's been there ever since.

Considering these recent moves along with efforts by the Bank of Japan and the European Central Bank to descend into negative rates we clearly find a general trend toward ultra-low interest rates: 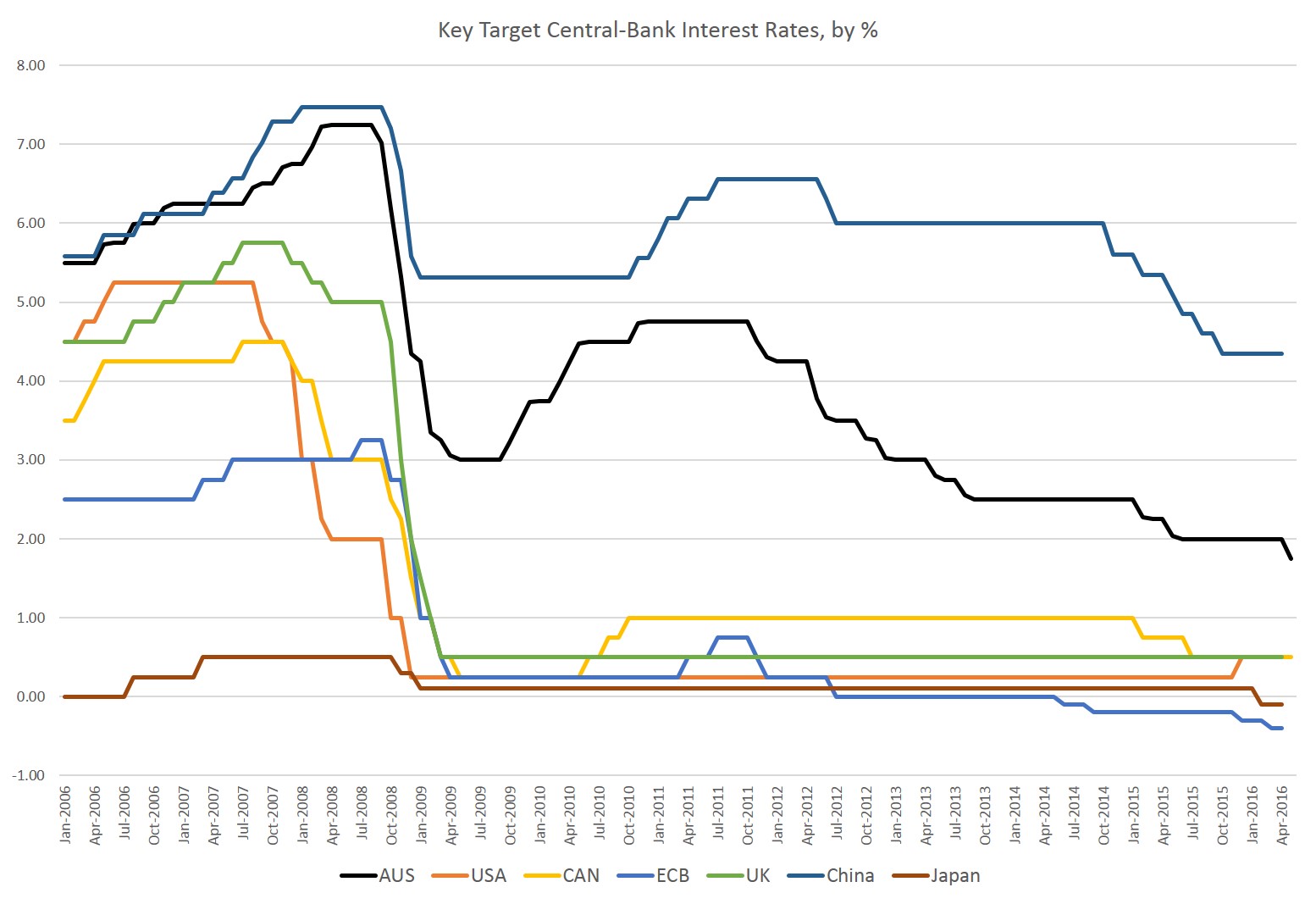 With the exceptions of China (a riskier developing economy) and Australia (which is closely connected to the Chinese economy) target rates have generally converged around zero percent.

Even in China and Australia though, rates are moving below where they've ever been seen before.

Australia, for example has averted recession for a number of years, helped along by rising demand in China, which has translated into demand for Australian goods and services. However, with a worsening economy in China, both China and Australia are hitting the "monetary stimulus" panic button. (China's rate has fallen to 4.35%.)

This is a road that other economies have already been on for several years, and Japan and Europe have already gone off the rails.

For the sake of providing more detail to our graph, let's remove Australia and China from the picture. Now we can compare large central banks since 2009 with a little more detail:

Over the past six months, the Bank of Japan, the Bank of Canada, and the European Central Bank have all cut their key rates, with Japan and Europe falling into negative territory. In recent weeks, both Canada and Japan have announced no change to the current rate, and both will stay put at 0.5 percent and -0.1 percent, respectively. 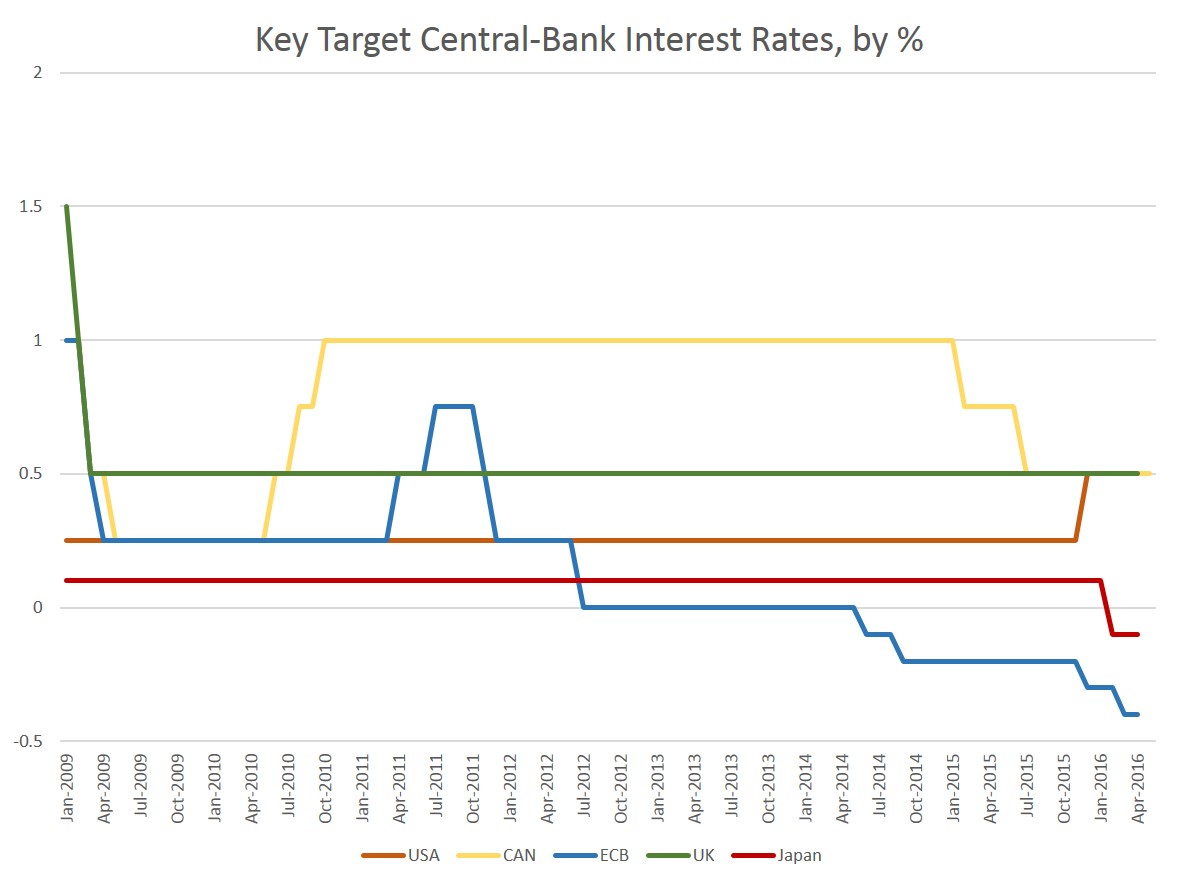 A summary of the most recently set rates:

With it's own seemingly panicked moves toward negative rates in recent months, Japan appears desperate, but Europe by comparison seems even more adrift with continued efforts to push down interest rates even further in an apparently futile effort to stimulate demand. Europe's key rate has now been pushed down to -0.4 percent.

Under pressure to demonstrate some sort of faith in the obviously weak US economy, the Fed finally raised its own key rate, raising the Fed Funds rate to 0.5 percent after seven years at 0.25 percent.

All of this is in the name of fighting deflation, we're told. In Australia and Canada, for example, the inflation rate is "too low" and is around 1.3 percent. In the US, it is under one percent, and in Europe and Japan, it appears to be negative.

For central banks, this is alarming since central bankers — including those at the US Fed — in recent years have invented to totally arbitrary goal of "2-percent inflation" as the "correct" inflation rate. This goal, mind you, appears nowhere in the Fed's Congressional mandate. It's simply something they made up.

Never mind the fact that asset price inflation is immense in many places with real estate and securities prices continuing to soar. In an attempt to goose inflation and to cater to export-driven interest groups, central banks will continue to turn to lowering interest rates and devaluing their respective currencies. For many people, real income is declining as asset prices rise, and earning a living only becomes more difficult.

But, as we've already seen, it won't work. The Bank of Japan — as explored here by Brendan Brown — has a tenuous grip on the situation, and negative rates appear to be spinning the situation out of control. Moreover, other central banks have nearly backed themselves into the zero-rate corner. The Fed, the Bank of Canada, and the Bank of England have all wisely — wise from a political perspective — kept their rates up at 0.5 percent. This will allow them to be seen as "doing something" when the economy worsens and they can all push rates down further to zero.

But then what? Japan and Europe provide some insight into the future. In the euro zone, for example, 0.6 percent growth is being touted as good news, and, even comically described as "blowing past" the US and Britain. Meanwhile, Japan has growth 0.7 percent over the past three years. In the US, growth was 0.5 percent in the first quarter.

This is apparently the best the central banks can do. Let's try not to think about how things will look when this "expansion" ends.

Note: All graphs by Ryan McMaken. Here are the specific key rates discussed here, with links:

Per Bylund, PhD, is a Senior Fellow of the Mises Institute and Associate Professor of Entrepreneurship and Johnny D...