Why Hippies Loved the VW Bug 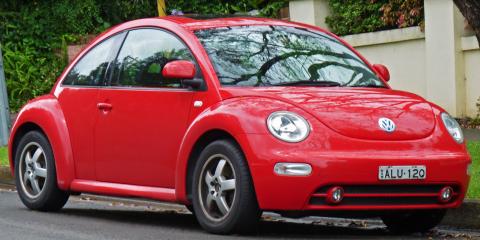 Taking for granted the fact that the hippie was part of a diverse group we called "hippies" who, in his varied states of mind, could not be counted upon to think or act like other hippies, there was, and still is, a certain type of hippie, a "hippie with a philosophy," who actually lived the communal life.

The philosophy of the communal hippie was likely to be based, although sometimes inadvertently, upon some shade of Marxism. For this type of hippie, the Volkswagen Beetles and Busses which the "material productive forces" brought into being may have represented the final stage of capitalism, finally sounding the death knell to its alienating division of labor.

To understand why some hippies may have thought this to be so, one must understand both the commonly known and the lesser known aspects of Marxist thought (an oxymoron, I know). In Theory and History, Ludwig von Mises pointed out that for Marx, any new invention was to be celebrated because it brought us all closer to our inevitable destiny, socialism. For as inventions advanced the capitalist system, wage earners, according to the "Iron Law of Wages," would be ever more impoverished. This steady impoverishment of the wage earning class would lead to the ultimate overthrow of capitalism and the institution of a new classless society. This is the commonly understood version of Marxism.

In "Freedom, Inequality, Primitivism, and the Division of Labor," Murray Rothbard sheds light on the characteristics of this new classless society. The classless society, a commune if one is a hippie, is chiefly an operating denial of the benefits of the division of labor.

In theory, in a hippie commune every person is a generalist; no one specializes in anything. The hippie may be cultivating rhubarb in the morning, sewing a patch on his tie-dye in the afternoon, tending to the sheep in the evening and so on. The hippie's lack of specialization in any one skill or task prevents him from becoming, in the Marxist lexicon, "alienated" from his labor.

This alienation of the worker from the finished product of his labor is one of the features of the division of labor which prevails in, indeed gives rise to, the capitalist system which Marx bemoaned.

This brings us to the Volkswagen Beetles and Busses that are now such a part of hippie folklore. Volkswagens were touted as "people’s cars" designed to be mechanically simple and reliable such that anyone with a basic set of tools could learn to be his own Volkswagen mechanic. This design philosophy fit well into the hippie philosophy of primitive subsistence, which was the necessary result of the hippie’s rejection of the division of labor.

The Volkswagen provided the hippie with mobility and, in the case of the Bus, an instant flop house, and usually could be kept running without resorting to the services of a professional mechanic. By the late sixties, the Beetle had been sold for almost twenty years with only a few design modifications. This enabled the hippie mechanic to easily mix and match parts from different vehicles made in different years to keep at least one VW running. This is why hippies loved Volkswagens.

Comically, the new Volkswagen Beetle is a slap in the face to the communal hippie. Gone are the "only a mother could love" looks of the old Beetles; they have been replaced by the retro chic lines of the new Beetle, produced to appeal to alienated suburban wage earners.

The new Beetle’s mechanicals are all state-of-the-art and would not take well to the tinkering of a dilettante hippie. So hippies of today who continue to wallow in their primitive ways pine for the old Beetles which are, like themselves, both primitive and wholly out of date.

As for the unstable, unsafe VW Bus, it has been discontinued while the modern minivans of Dodge, Toyota, Ford, etc. thrive by offering safe, affordable family transportation for suburbanites.

Are there any lessons to be learned from the plight of the communal hippie? Perhaps lesson number one is that capitalism and the division of labor are nowhere near dead. As long people are insightful enough to see the benefits of dividing work up among specialists to produce far more at a lower cost than could done by any individual working alone, a system of divided labor will be with us.

Lesson number two is that the division of labor, that allowed for the creation of the Volkswagen and every other high order consumer good in the first place, is not the enemy of the working man. On the contrary, the division of labor is what makes for economic efficiency, social cooperation and an ever higher standard of living for all consumers.

"To each according to his need" was merely the rationalization for totalitarian government to take from the productive and give to the unproductive while attempting to take advantage of a system of divided labor.

The final lesson is a corollary to the first two. The hippie commune is not a replication the wonderful harmonious world that existed before the ravages of industrialism. Life before industrialism was, for most of the world’s inhabitants, characterized by hard labor, privation, illness, and early death.

Communes tried to bring back a bygone era that never was under a principle of savage self-sufficiency. No person intelligent enough to sustain himself under this system would be fool enough to eschew the benefits of cooperation, specialization, and trade.

The introduction of the new Volkswagen Beetle should make the all of the above lessons clear. The new Beetle is mass produced by a system that takes advantage of divided labor from all over the world. Unreconstructed hippies despise the new Beetle because it is one more representation of the failure of their communal order to take hold of society.