GET NEWS AND ARTICLES IN YOUR INBOXPrint
A
A
Home | Mises Library | Theory and History: An Interpretation of Social and Economic Evolution

Theory and History: An Interpretation of Social and Economic Evolution 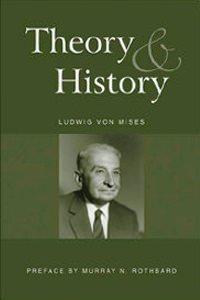 Theory and History An Interpretation of Social and Economic Evolution.pdf

Theory and History An Interpretation of Social and Economic Evolution.pdf

Theory and History An Interpretation of Social and Economic Evolution.epub

Like Hayek, Mises moved beyond economics in his later years to address questions regarding the foundation of all social science. But unlike Hayek's attempts, Mises's writings on these matters have received less attention than they deserve. Theory and History, writes Rothbard in his introduction, "remains by far the most neglected masterwork of Mises.

Here Mises defends his all-important idea of methodological dualism: one approach to the hard sciences and another for the social sciences. He defends the epistemological status of economic proposition. He has his most extended analysis of those who want to claim that there is more than one logical structure by which we think about reality. He grapples with the problem of determinism and free will. And presents philosophy of history and historical research. Overall, this is a tremendously lucid defense of the fundamental Misesian approach to social philosophy.

It is Mises's great methodological work, explaining the basis of his approach to economics, and providing scintillating critiques of such fallacious alternatives as historicism, scientism, and Marxian dialectical materialism.... Austrian economics will never enjoy a genuine renaissance until economists read and absorb the vital lessons of this unfortunately neglected work.

Theory and History should be required for any student of 20th century ideas.