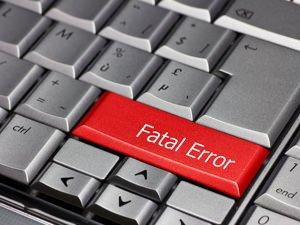 Keynes’s keynote book, The General Theory, is loaded with economic theory. There are only two pages of data in that book, and Keynes dismisses the scant data he cites as “improbable.” By contrast, Piketty’s new book, Capital in the Twenty-first Century, is stuffed with data. Indeed Piketty considers himself a successor to the economist whose data Keynes dismissed, Simon Kuznets. Almost everyone admits that Piketty’s theoretical case is weak — but, his supporters say, look at all this data. You can’t argue with this mass of historical evidence!

Piketty’s primary argument is that wealth (which tends to be concentrated in few hands) grows faster than the economy, so that those with a lot of wealth keep getting richer relative to everyone else. This is supposed to be an inescapable feature of capitalism. (If this sounds familiar, it should be. It echoes both Marx and Keynes, although we should remember that Keynes mocked most of what Marx said as “hocus-pocus.”)

So what then is the evidence that wealth has grown faster than the economy? 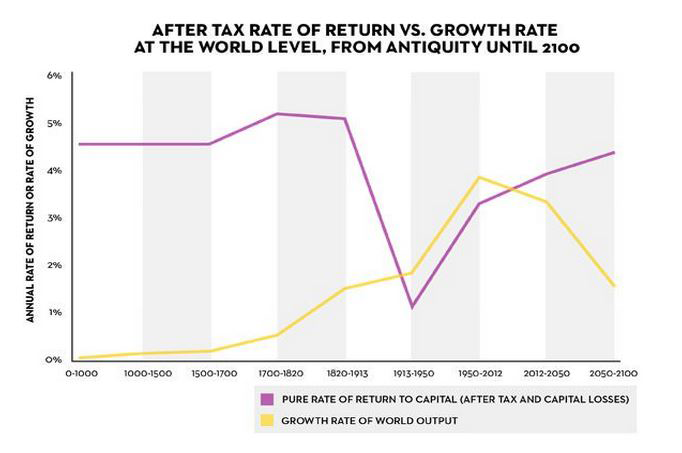 This chart is astonishing for many reasons. First of all, it suggests that capital earned a 4.5 percent or higher return for the years 0-1800 C.E. This is a crazy number. If the human race had started out with only $10 in year 1 and compounded it at 4.5 percent a year for any series of 1,800 years, by now we would have much, much more than a trillion times the entire world’s wealth today, which is estimated at $241 trillion by Credit Suisse.

The 4.5 percent or higher number is also crazy because Piketty is right that there was negligible economic growth prior to the industrial revolution, and such high returns for the rich are just not consistent with so little growth. The truth is that rich people for most of those years were interested in spending or hiding their wealth, not in investing it, because wealth out in the open was likely to be stolen, if not by bandits, then by government.

If you look closely at the more modern part of the chart and ignore the projection into an unknown future, you will see that the lines do not support Piketty’s thesis. His idea that the rich will always necessarily get richer relative to everyone else under capitalism is not supported by the data he presents. 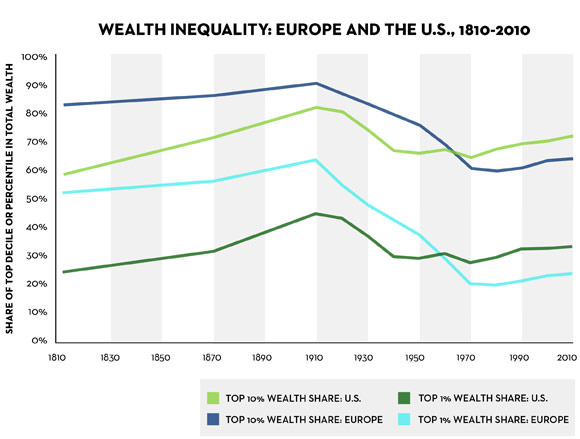 The next chart is one that I have commented on in an earlier article. It shows the income of the top 10 percent in the US over time as a percent of all income. Income in this case includes capital gains which arguably are not true income, but rather the exchange of one asset for another, and excludes government transfer payments which make a considerable difference to the results. Even so, once again we do not see an inexorable rise in the income of higher earners over time, far from it. 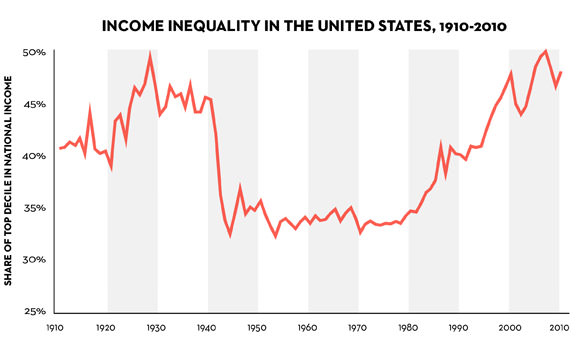 What we actually see is two peaks for high earners, right before the crash of 1929 and again before the crash of 2008. These are the two great bubble eras in which government printed too much new money, which led to a false and unsustainable prosperity. These were also crony capitalist eras, as rich people with government connections used the new money to become even richer or benefited from other government favors.

Unfortunately world central banks have blown up yet another bubble in capital markets following the crash of 2008, which has again brought the high earners share back to 50 percent in 2012, based on data that became available after the book’s publication. This newest bubble too will eventually burst and bring the share back toward the 40 percent level of 1910, the start of the chart.

Perhaps the most astonishing claim in Piketty’s book is that government bureaucracies need to be reformed so that they can make most efficient use of all the new income and wealth taxes that are recommended. The assumption is that almost complete government control of the economy would be best, but that the machinery needs some fine tuning.

Economist Ludwig von Mises demonstrated almost 100 years ago that a state managed economy will simply not work, because among other problems it cannot set workable prices. Only a consumer run economy can do that. Socialists have been trying to disprove Mises’s thesis ever since, but have never succeeded. Piketty should at least read Mises.