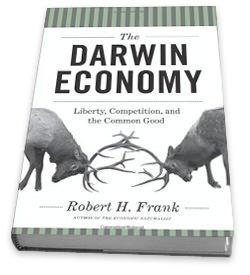 A specter is haunting Robert Frank's latest book — the specter of libertarianism. For him, it is a doctrinaire view with little to recommend it; yet he again and again seems drawn both to try to refute it and to deflect it. Libertarianism he takes to be wrong; but even those who accept it, he thinks, ought to see that his proposals for progressive taxation and assorted welfare measures are reasonable. One might at first be inclined to explain Frank's behavior by saying that it responds to the bad influence, as he sees it, that libertarian positions have on discussions of public policy. I suspect that there is more to it than that, though. Libertarianism exerts a peculiar fascination over him.

He says about libertarianism,

Unlike most critics on the left, I will grant the libertarians' most important basic assumptions about the world — that markets are competitive, that people are rational, and that the state must meet a heavy burden of proof before restraining any individual citizen's liberty of action. Although there are reasons to question each assumption, the internal contradictions of the libertarian framework emerge clearly even if we accept these assumptions uncritically. (p. 11)

What is the internal contradiction at the heart of libertarianism that Frank claims to discern? Here Frank reprises a theme familiar to readers of his earlier books.

The fatal flaw in that [libertarian] framework stems from an observation that is itself completely uncontroversial — namely that in many important domains of life, performance is graded on the curve.… The dependence of reward on rank eliminates any presumption of harmony between individual and collective interests, and with it, the foundation of the libertarian's case for a completely unfettered market system. (p. 11)

A recent news item illustrates what Frank has in mind. The US Anti-Doping Agency has stripped Lance Armstrong of his Tour de France victories on the grounds that he used forbidden performance-enhancing drugs. The merits of that controversy aren't here our concern, but it serves to raise the question, Why do athletes ingest substances that may harm them? Obviously, they do so to gain an advantage over their competitors. But so long as a substantial number of rival athletes do this, none will gain an advantage over the others. You would get a jump on the competition if only you took the substances and no one else did, but this is irrelevant to what happens in the actual world. Athletes have gone to useless trouble and put their health at risk, and the result is that they are exactly where they were before in their battles with one another.

The dependence of reward on rank of course affects many others besides athletes, and one particular instance of it especially bothers Frank. People want their children to attend the best available school, and schools in richer neighborhoods are better than those in poorer areas. This leads parents to work longer and harder — and under riskier conditions — than they otherwise would have, in order to afford to move into a better neighborhood. Once more, though, their efforts do not gain for them the result they hope for: each parent is thwarted by the similar efforts of other parents.

A worker might well accept a riskier job at a higher wage because doing so would cover the monthly payments on a house in a better school district. But the same observation applies to other workers. And because school quality is an inherently relative concept, when others also trade safety for higher wages, no one will move forward in relative terms. They'll succeed only in bidding up the prices of houses in better school districts. (p. 40)

Frank draws an analogy between this type of futile struggle and a phenomenon studied by Charles Darwin. An example is the bull elk, which has developed outsized antlers. These "function not as weaponry against external predators but in the competition among bulls for access to females" (p. 21). The antlers make them less speedy and thus easier for wolves to attack them. They are even worse off than Lance Armstrong and his fellow cyclists. Darwin's study of this phenomenon leads Frank to "offer the following prediction. One century hence, if a roster of professional economists is asked to identify the intellectual father of their discipline, a majority will name Charles Darwin" (p. 16).

This is all very well, you may say — or actually, as we'll soon see, not so very well — but what does it have to do with libertarianism? The answer is simple. The government can rescue us from these futile competitive struggles by imposing a heavy progressive consumption tax. People would then have less money to waste on trying to get ahead of one another, but they would be no worse off: remember, the money that we spend on clawing our way to the top does us no good. All of our efforts leave us where we were before we spent the money. Given the good offices of the government, people could still attempt to surpass one another, but the government can now spend the money it extracted in all sorts of useful projects.

Unfortunately, the nasty libertarians bar the path. They profess the astonishing idea that people have the right to spend their money as they wish and that the government has no right to take it from them without their consent. Do they not see that they stand in the way of efficiency? Out with them!

Frank's argument for a consumption tax does not work, for a number of reasons. Some of these I have addressed in previous reviews, so I will be brief; but to avoid accusations of recycling old material, I'll add a new point.1 The central failing of Frank's analysis of competitive struggles is that it need not be true that spending money on efforts to get ahead of others results in a situation better for no one. People need not end up exactly as they would have had no one devoted resources to the struggle.

Engaging in a competitive struggle may change the rank order of people from what it otherwise would have been. Suppose, e.g., that the accusations against Lance Armstrong are true — he did take drugs, as did his competitors. If none of the cyclists had taken the drugs, it might not be true that a drugless Armstrong would still have triumphed. Perhaps he benefited from the drugs more than his competitors did.

Further, some people win competitive struggles by spending more money than their rivals. Frank offers an example of this:

Frank may not like Steinbrenner's activities, but he cannot say that taxing away resources to prevent competitive struggles among the owners would have left no one worse off. Steinbrenner might not have prevailed if all owners' spending were restricted; and, given his intense desire to win, he would have been worse off.

This leads to the new point I wish to raise against Frank. What if people enjoy the sort of fighting that leads Frank to tear out his hair? What if just what they wish to do is to spend all the money they can to triumph? True, they can still under Frank's tax proposal spend what the government deigns to allow them to keep; but they cannot devote themselves to the struggle in the all-out fashion that they wish. One strongly suspects that Frank has substituted his more abstemious preferences for the wishes of those he considers profligate and wasteful. He has not come up with a neutral tax proposal that benefits everyone and harms no one.

But does this matter? Frank might respond to my objection that even if spending money on competitive struggles changes the rank order of those who engage in them, it is still true that these struggles do not increase aggregate welfare. The struggles do not lead to more winners and fewer losers than before. If so, could not Frank say that things would be better for most people if the money used in these fights were taxed away and spent on other things?

To say this, though, Frank would have to introduce his own views about how people "should" spend their money. He could no longer make the value-neutral claim that he was showing people how they could be better off, given their own preferences. If Frank wishes to take this step, then he owes us an account of morality, and this he makes no pretence of providing.2

Even if Frank's analysis were right, his case against libertarianism would not work. People who think that various competitive struggles would cost more than they were worth are free to agree voluntarily to abandon or curtail them. Voluntary agreement may be slower and more cumbersome, in some cases, than resort to the government. But it respects the rights of people over their own property, a matter of little concern to Frank. To the contrary, the libertarian idea of property rights baffles him.