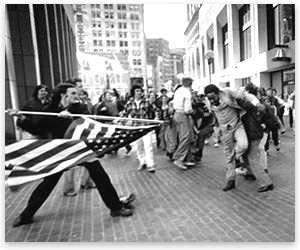 The political season brings promises to "bring us together as a community" and "heal the divisions between us." Here is what the political class won't reveal: their laws, programs, restrictions, subsidies — the whole panoply of interventionist measures they love and of which they promise ever more — are the main source of social division.

Free trade, for example, brings polar opposite countries together. Only a few decades ago, we were in an arms race stand off with communist China. Today we trade, extensively bettering each country's people.

Trade can lower weapons and grow relationships. It also helps us learn about other cultures and traditions. Many multinational corporations have discovered that without appeasing local tastes their new business ventures will implode.

Companies like Coca-Cola in India and Pizza Hut in China must learn about various cultures. We exchange business models and ideas to grow closer together.

Trade does not make us all experts in world religions and cultures. However, it does give us a clue and helps build tolerance and appreciation. Chinatowns and other ethnic enclaves don't translate exact culture of those far away places. However, we do get a mere taste of other countries that would be unavailable if our borders were more closed and our participation in world trade far less. This exchange is valuable in promoting peace and understanding in the world.

But what does the welfare state do?

First of all, the welfare state is supposedly a caring entity. However, this entity does not engage the world but instead only engages its own citizens. The welfare state breeds cultural isolationism.

The idea is this: Social Security for us and no one else. The rhetoric of kindness hits a hard wall of hypocrisy here. The welfare state in its nature does not care about the world but "cares" about its own voters and constituents.

Social programs run large expenses that cannot long be afforded by any nation. The natural result is for nations to turn against their neighbors and those in need, creating social conflict. Today in the United States, we debate about the great costs imposed on Americans by immigrant consumption of social services.

Resentment builds toward what many see as a threat to the system that "provides" us with social security, medicine, and welfare. This growing hatred of immigrants is not something unique to the United States. All across France, as well as many other Western European welfare states, the resentment of all immigrants from Africa, Eastern Europe, and Turkey boils.

The end result of all socialist states will be national socialist perspectives. The "right" to health care, the "right" to social security, and the "right" to welfare become the rights of citizens born and raised, not the outsiders. The social conflict grows.

We force our states and our local communities to pay for the healthcare, and pay for the education. Why wouldn't they bring their families? And because of our economic conditions, we do need workers. But if we had a truly free market economy, the illegal immigrants would not be the scapegoats. We would probably need them, and they would be acceptable. But because of economic conditions, they have become the scapegoat.

And of course in the last sentence, these economic conditions are the overwhelming burden placed by state expenditures.

This discussion reaches far beyond immigration. Today, most animosity between the races does not come from the idea that blacks or Hispanics or whites are inferior. In modern days, most people who resent another race feel the other races are equal.

Many ask, "If others are equal, then why are they consuming more welfare services per capita?" Other cultural groups are seen as criminals stealing money from honest taxpayers.

The agitation is not toward blacks or Hispanics, but to the welfare queen, the crack pusher, and the disability scammer. I've never heard of anyone being angry because a black man made a lot of money. People aren't angry with Reginald Davis, Atlantic CEO of Wachovia, or Kenneth Chenault, the black CEO of American Express. In fact, the same types of people who in general resent black people for welfare use love these individuals. The social conflict isn't about color anymore.

Other egalitarian policies have enlarged this problem even more. No single policy has been more destructive to black and white relations than affirmative action. This policy was designed to promote unity and egalitarianism. The result has been a growing animosity between the two groups.

Such is the route of the welfare state: hate those who use the system extensively. Weren't these programs supposed to bring us together and bridge the gaps of income and race? The reality is throwing more fuel to the fire of separation and segregation.

The welfare state creates resentment among groups who pay and groups who get paid. Some are angry at those who won't give them more money, while the other side doesn't want any more money taken away. Often an entire group will be seen as being on one side of that line. The tension comes from this push and pull, not from color.

Anger is not just between races but within races. Whites often resent "trailer trash" who are their own skin tone and from the same genetic background.

The rich have no reason to dislike or hate the poor. But once you turn the impoverished into a voting block for higher tax rates or more redistribution, a class struggle will ensue.

Tensions between groups have always existed. When the Chinese and Irish first arrived, many felt that they were going to steal jobs and destroy the economy. However, time revealed the fallacy of these claims. It is by no mere accident that the most booming areas of this country are in New York City and the West Coast.

You cannot hate a race long when they don't do anything to invade your life. The welfare state perpetually increases the costs of immigration. A period of acceptance never comes about as the new immigrants are immediately cradled by the state. There is almost no discrimination left against Asians or the Irish. Is this mere coincidence? Or were they viewed as non-invasive after a few decades of immigration without the state stealing taxes from current residents in order to bribe the arrival of a new voting block?

Politicians are more than happy to exploit this state-created class struggle for their own purposes. The Democrats are more than happy to have a constant voting block to which they can promise better social services. Republicans are overjoyed to have citizens who can be lied to about lower taxes time and time again as they run some of the biggest deficits this country has ever seen.

Frédéric Bastiat said long ago what still rings true today: "Government is the great fiction through which everybody endeavors to live at the expense of everybody else."

These social problems are the battle where every man aims at the tax money of every other man. This is the root of modern animosity, racism, and spite. The only way for us to live together in harmony is through trade and voluntary interactions, which benefit both parties.

These programs that supposedly bring us together actually tear us apart. Unity cannot be created artificially through the welfare state. Unity is something that must naturally happen among groups of individuals.

To forcefully and coercively attempt to bring unity through the welfare state breeds only hatred and social conflict.