The Social Function of Profit-and-Loss Accounting 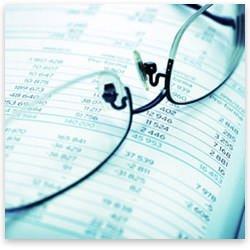 Many naïve observers of the market economy dismiss concern with the "bottom line" as a purely arbitrary social convention. To these critics, it seems senseless that a factory producing, say, medicine or shoes for toddlers stops at the point when the owner decides that profit has been maximized. It would certainly be physically possible to produce more bottles of aspirin or more shoes in size 3T, yet the boss doesn't allow it, because to do so would "lose money." On the other hand, many apparently superfluous gadgets and unnecessary luxury items are produced every day in a market economy, because they are profitable. Observers who are outraged by this system may adopt the slogan: "Production for people, not profit!"

In standard introductory textbooks, they often define the economic problem as society's decision on how to allocate scarce resources into the production of particular goods and services. In reality, "society" doesn't decide anything; individual members of society make decisions that interact to determine the ultimate fate of all the resources at humanity's disposal. In the pure market economy, everyone in society obeys the rules of private property, which assign ownership claims to particular units of resources.

In this context, market prices are formed when individuals engage in voluntary exchanges with each other. The resulting prices in turn give entrepreneurs the ability to calculate (expected) profits and losses from various possible activities. It is the interaction of property owners in voluntary trades that "determines" what goods and services get produced, but the signals provided by market prices — and the resulting calculations of profit and loss — help the property owners make informed decisions.

It might be useful to step back and look at the big picture. The entrepreneurs offer money to the owners of labor services, capital goods, and natural resources. The entrepreneurs then use these inputs to produce goods and services which they sell to consumers for money (see figure below).

When a particular entrepreneurial venture goes "out of business," what that ultimately means is that consumers were not willing to spend enough money on its finished output to cover the offers the entrepreneur needed to make in order to bid the scarce inputs away from other entrepreneurs who wanted the inputs for their enterprises. 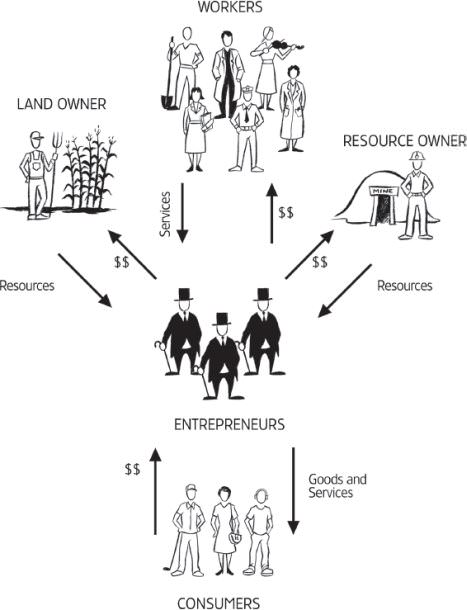 To see this principle more concretely, let's work with a silly example. Suppose a successful builder dies and passes on his business to his foolish son. The son gets the bright idea to build new apartment buildings covered with pure gold. He correctly estimates that there would be high demand for apartments where the elevator, hallways, and kitchen shelves were coated with gold. In fact, the son can rent his units for much higher monthly fees than the owners of normal apartments in similar locations.

Of course, this isn't the whole story. Even though his revenues are very high, the foolish son's production costs are astronomical. In addition to the labor, wood, concrete, and other items, he must spend hundreds of millions of dollars buying large quantities of gold. His accountants inform him that despite the higher revenues, he is losing incredible amounts of money because of his decision to coat the apartments with gold. The son will have to either wisen up quickly, or he will squander all of his wealth. Either way, he won't be building apartments coated with gold for very long.

Loosely speaking, the profit-and-loss system communicates the desires of consumers to the resource owners and entrepreneurs when they are deciding how many resources to send into each potential line of production. It's ultimately not the owners of gold mines nor the captains of industry who determine how gold will be used in a market economy. Instead, these decisions are largely guided by the spending decisions of the consumers. It is the consumers' demands for normal versus gold-coated apartments, in conjunction with their demands for silver- versus gold-coated necklaces, that leads to the outcome that gold-coated apartments are ridiculously unprofitable while gold-coated necklaces are perfectly sensible.

The profit-and-loss test provides structure to the free-enterprise system. People are free to start new businesses and to sell their resources (including the labor services of their bodies) to whomever they wish. In a market based on the institution of private property, profits occur when an entrepreneur takes resources of a certain market value and transforms them into finished goods (or services) of a higher market value. This is the important sense in which profitable entrepreneurs are providing a definite service to others in the economy. Without the feedback of profit-and-loss calculations, entrepreneurs would have no idea if they were making economical use of the resources used up by their business operations.

[This article is excerpted from Lessons for the Young Economist, part 2, advanced lesson 13, "Profit and Loss Accounting" (2010).]