Social Darwinism and the Free Market 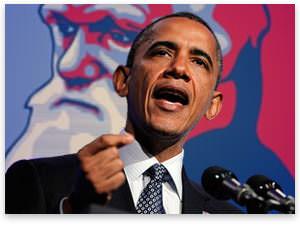 [Free Market, May 2012. You can subscribe by becoming a member.]

In a speech to the American Society of Newspaper Editors on April 3, 2012, President Obama called a budget proposal of his Republican opponents in Congress "thinly veiled social Darwinism."

What did the president mean by this comment? The budget proposal in question, he claimed, would require drastic cuts in government programs designed to aid the poor. "And by gutting the very things we need to grow an economy that's built to last — education and training, research and development, our infrastructure — it is a prescription for decline." Further, his opponents reject proposals to increase taxes on the rich.

How can anyone favor refusing government aid to the poor and oppose requiring the rich to pay more in taxes? Obama answered that those who think in this way must believe that the welfare of the rich is of primary significance. The poor, and everyone else, must take whatever "trickles down" to them from the rich.

It is this view that Obama had in mind when he spoke of social Darwinism, but the doctrine is usually characterized in a different way. Darwin, it is alleged, has taught us that evolution is a struggle in which the strong overcome the weak. To aid the poor would, on this view, act counter to progress. It would be an attempt to promote the survival of the unfit, rather than the fit. Instead, we should stand out of the way and allow the poor and improvident to suffer the natural consequences of their feckless ways.

Responses to Obama's speech from defenders of the free market have not been slow in coming. The libertarian philosopher and historian George Smith, among others, has noted that Herbert Spencer and William Graham Sumner, usually classed as the main social-Darwinist defenders of the market, believed nothing like the doctrine just described. Spencer approved of private charity and includes in his Ethics a discussion of the duties of "positive beneficence."

Spencer opposed coercive, state enforced charity, but he favored charity that is voluntarily bestowed.… In one essay he observed that it was becoming more common for the rich to contribute money and time to the poor, and he praised this trend as "the latest and most hopeful fact in human history." Moreover, the final chapters in Spencer's The Principles of Ethics are devoted to the subject of "positive beneficence," the highest form of society in which people voluntarily help those in need.

Further, as the political philosopher Larry Arnhart has pointed out, Darwin did not teach that human evolution depends on ruthless struggle. To the contrary, he emphasized the importance of social unity and cooperation. "'Selfish and contentious people will not cohere,' Darwin declared, and without coherence nothing can be effected. If Social Darwinism is all about selfish competition … then Darwin was not as Social Darwinist."

The notion of the struggle for existence as Darwin borrowed it from Malthus is to be understood in a metaphorical sense.… It need not always be a war of extermination such as the relation between man and morbific microbes. Reason has demonstrated that, for man, the most adequate means of improving his condition is social cooperation and division of labor.

Indeed, it is difficult to find writers who called themselves "social Darwinists." But some of Obama's critics have gone too far. Jonah Goldberg, e.g., treats social Darwinism as largely a myth for which Richard Hofstadter, the author of Social Darwinism in American Thought (1944), bears primary responsibility.

Simply put, there was no intellectual movement — at least not in America or Britain — called Social Darwinism, and the evil views attributed to so-called Social Darwinists were not held by its alleged founders.… [Richard] Hofstadter, the historian who essentially invented the idea that American capitalism in the nineteenth century was inspired by Charles Darwin, never offered much by way of actual proof that his idea was accurate. (Jonah Goldberg, The Tyranny of Clichés, Sentinel, 2012, pp. 102, 110)

Goldberg's thesis is not correct. There really were a number of people who defended capitalism with quasi-Darwinist arguments. Murray Rothbard discusses one example of such a defense, a speech delivered in 1934 by Colgate University President George B. Cutten. In Rothbard's summary,

The theory is originally based on an unwarranted extension of Darwinism to the history of man. Supposedly, man develops continually struggling against nature — i.e., struggling to adapt himself to natural conditions. As generations develop, the "fit" or "the fittest" survive, and the "unfit" die. The progeny of the "fit" are also "fit," while the unfit get no chance to reproduce. In this way the human race supposedly improves. As Dr. Cutten puts it, "The strong won, the weak lost; the strong left progeny, the weak died early and childless. It worked out pretty well too."

men are violating Nature's wishes and injunctions, that the unfit are being protected by "modern medicine and modern philanthropy" and are debilitating the race by being permitted to live and have children.… That is the essence of Dr. Cutten's thesis and the broad outlines of social Darwinism or rugged individualism. It seems to me that the mere statement of it would expose it as obvious bilge. (Rothbard vs. the Philosophers, ed., Roberta Modugno, Mises Institute 2009, pp. 50–52)

As Rothbard trenchantly remarks, the social-Darwinist argument is a poor one. Even if it accurately described biological evolution, very much contrary to fact, why would it give us a guide to policy? Why should we aim to promote the goal of evolution, if we prefer not to do so? The social-Darwinist theory masks a recommendation about social ethics with a pseudoscientific narrative. Rothbard ably sums up the manifest failings of this position:

It is therefore evident that there is no moral or ethical value attaching to a survivor. Sheer luck plays the biggest part in history in determining who has survived. The Rugged Individualist suffers from the delusion that survival — sheer survival — is ipso facto evidence of high moral qualities. (Ibid., p. 54)

Instead of falsely denying that social Darwinism ever existed, supporters of the market do far better to adopt a different defense; and here once more Mises guides us to the proper path. The free market is not, as the social Darwinists imagine, a struggle between rich and poor, strong and weak. It is the principal means by which human beings cooperate in order to live. If each of us had to produce all his food and shelter by himself, almost no one could survive. The existence of large-scale society depends absolutely on social cooperation through the division of labor.

The fundamental social phenomenon is the division of labor and its counterpart human cooperation. Experience teaches man that cooperative action is more efficient and productive than isolated actions of self-sufficient individuals. The natural conditions determining man's life and effort are such that the division of labor increases output per unit of labor expended. (Human Action, p. 157)

Further, as Mises also pointed out, social cooperation by no means benefits only the rich and more productive people in society. Precisely the reverse is the case. Mises, explaining Ricardo's law of comparative cost as a more general law of association, argued that it is to the advantage of those of superior ability to trade with those less skilled:

Ricardo expounded the law of association in order to demonstrate what the consequences of the division of labor are when an individual or a group, more efficient in every regard, cooperates with an individual or group less efficient in every regard.… Ricardo was fully aware of the fact that his law of comparative cost, which he expounded mainly in order to deal with a special problem of international trade, is a particular instance of the more universal law of association.… Collaboration of the more talented, more able and more industrious with the less talented, less able, and less industrious results in benefits for both. The gains derived from the division of labor are always mutual. (Human Action, pp. 158–59)

Of course, such trade helps the less able, since their trading partners are by hypothesis more efficient than they are; but contrary to what one might at first think, the more able gain as well, if they specialize in the area of their greatest advantage. The free market is not a struggle but a cooperative endeavor of supreme importance.

But have we not left one question unanswered? If the market is not the struggle between rich and poor depicted by social-Darwinist myth, how can defenders of the free market oppose government programs that aid the poor through the provision of education and medical care? How can the defenders oppose heavy taxes for the rich? If Obama's invocation of social Darwinism does not explain such opposition, what does?

The answer to that is sufficiently obvious, though it escaped the mind of our president. These programs take from some to give to others: they strike against the cooperative aim of a free society. The poor fare far better in the free market than they do from government largesse. Obama would of course disagree, and to show in detail the evidence for our claim is an extended task that will not be attempted here. (For those interested in the issue, Henry Hazlitt's Man vs. the Welfare State is an excellent place to begin.)

But one may note with astonishment that so obvious a reason for opposing his programs failed to occur to the president. Instead, he resorted to a catchphrase, "social Darwinism," virtually empty of substance.

This article was originally published in the Free Market, May 2012. You can subscribe by becoming a member.
Author: