GET NEWS AND ARTICLES IN YOUR INBOXPrint
A
A
Home | Mises Library | Soak the Rich? 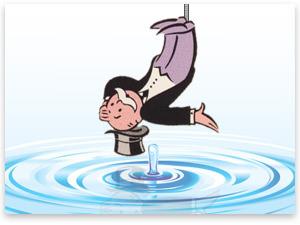 From the Buffett Rule to France's 75 percent tax on the wealthy, "soaking the rich" is all the rage once again. Henry Hazlitt, writing his Business Tides column for Newseek, challenged this perennial impulse in the following three articles from the postwar era. Note Hazlitt's "Laffer curve" analysis, written when Arthur Laffer was in primary school. However, as Hazlitt makes plain, it was public welfare, and not government revenue, that he was really after in pushing for lowering taxes on the rich.

High Taxes vs. Incentive and Revenue

In its March letter the National City Bank publishes some illuminating income-tax tables. One of these shows how much is actually left at various income levels for the taxpayer himself out of every extra dollar he earns. The figures are for a married man with two children and legal deductions of 10 percent of his gross income.

When the Gallup poll asked people how much they thought a man who earns $50,000 a year ought to pay in income taxes the median average answer was $7,500. This is only about a third of what such a man actually does pay. The taxpayer is allowed to keep less than half of everything he earns above $22,000. The question of "fairness," however, is one on which it seems impossible to get agreement. No matter how much is taken from the big incomes, some people cannot see why those who earn more than they do should be allowed to retain any amount higher than they themselves can earn.

It seems more profitable from a pragmatic standpoint, therefore, to consider not so much the "fairness" of the tax structure as its practical effects on the economy. One obvious effect (considering the present corporate as well as personal income-tax structure) is to soak up the principal sources of capital funds. The funds that the present tax structure takes are precisely those that would have gone principally into investment — that is, into improved machines and new factories to provide the increased labor productivity which is the only permanent and continuous means of increasing wages.

An even more important effect of taking so much of the taxpayer's earnings is to diminish or remove the incentives to bringing such earnings into existence in the first place. This means not merely a loss to the taxpayer who does not trouble to earn the money. It means a loss to the wealth of the whole nation. It means a loss even to the Treasury itself. Another table compiled by the National City Bank, based on reports of the Bureau of Internal Revenue, strikingly illustrates this result. (The dollar figures stand for millions of dollars.)

Let's see what this means. During the same period that the total national income increased 58 percent, total incomes over $300,000 fell 77 percent. If each individual's income had risen by the same percentage, total incomes over $300,000 would have risen by a much greater percentage, for all incomes previously above $190,000 would now be counted among the incomes over $300,000. Yet even if the aggregate of such incomes had risen no more than proportionately to the whole national income, the total would have reached $2,637,000,000 — seven times greater than it actually was. And if this income had been taxed at the same schedule as in 1926–28, with a top tax rate of only 25 percent, the yield to the Treasury would have been about $444,000,000.

It would have been, in other words, about 50 percent greater than the actual yield from the greatly reduced incomes taxed at a top rate of 88 percent. For there can be little doubt that overwhelmingly the most important reason for the contraction of incomes over $300,000 in 1942 compared with 1926–28 was precisely the increase in the top personal income-tax rate from 25 percent to 88 percent. In other words, there can be little doubt that a sharp reduction in the top tax rates prevailing today would eventually greatly increase rather than reduce revenues.

The Cost of "Soaking the Rich"

If the Republicans and Democrats in Congress were not mainly engaged in trying to outmaneuver each other for votes, and if they understood the real economic situation that confronts them, they would be debating an entirely different measure from the present tax bill. They would try to apply the ax first of all not to taxes but to expenditures. If they concluded that overall spending could not in fact be substantially cut, they would not be planning an inflationary slash in taxes of $4,800,000,000 to $6,500,000,000.

But they might be considering, not how many voters could be exempted completely from income taxes in order to support a short-lived illusion that the present enormous tax burden can be borne by a minority, but how far excessive tax rates on high incomes should be reduced to restore incentives to production and investment. For the funds that the present income-tax structure takes are precisely those that would have gone principally into investment — that is, into improved machines and new factories to provide that increased labor productivity which is the only permanent and continuous means of increasing wages. An even more important effect of taking so much of the taxpayer's earnings, in fact, has been to diminish or remove the incentives to bring such earnings into existence.

About a year ago in this column (April 7, 1947) I presented a table, based on income-tax returns, which brought out some striking facts. In the period between the three years 1926–28 and the year 1942, our total national income increased 58 percent. But total incomes over $300,000 fell in that period by 77 percent. If individual incomes in each group had risen by the same percentage as the national income, total incomes over $300,000 would have risen by a much greater percentage (because all incomes previously above $190,000 would in 1942 have been counted among incomes over $300,000). Yet even if the aggregate of such $300,000 incomes had simply risen in proportion to the whole national income, the total of such incomes in 1942 would have been seven times greater than it actually was.

The top rate applicable to incomes over $300,000 in 1926–28 was 25 percent. The top rate in 1942 was 88 percent. We are justified in assuming that the main cause of the shrinkage in incomes over $300,000 was precisely this increase in the top rates. If the upper income brackets had continued to be taxed at only 25 percent, and if these incomes had increased in the aggregate no more than the national average, the yield to the Treasury would have been about 50 percent greater than it actually was at a tax rate of 88 percent.

In other words, the extremely high income-tax rates are self-defeating. Few people realize how drastically revenues from the high incomes have shrunken. Today the combined normal and surtax rate (after the 5 percent reduction) is 50 percent on all net income between $18,000 and $20,000. Suppose the combined rate stopped at this level, instead of mounting progressively on higher income brackets to a maximum of 86.5 percent. What would be the effect on total revenues? Calculations furnished to me by the Tax Foundation indicate that the loss of revenue — if incomes above $18,000 remained unaffected — would be about $1,095,000,000 for the fiscal year 1948–49. This would be less than 5 percent of total individual income-tax revenues and less than 2.5 percent of total budget receipts.

Obviously, however, incomes above $18,000 would not remain unaffected by such a drastic cut in top-bracket rates. Such incomes would expand far beyond what they otherwise would be. Treasury revenues would actually be higher with a top rate of 50 percent than with a top rate of 86.5 percent.

But far more important than the effect on Treasury revenues would be the effect on national welfare. The national income would be higher not because the high incomes themselves would be larger; but mainly because the lower rates would both permit and encourage high investment. It is this investment that would raise national production and real wages. In our efforts to soak the present rich we have been soaking the future poor.

The present drive to raise the income-tax exemptions and relieve millions of voters from the obligation to pay any income tax whatever is merely the latest illustration of how easily the progressive income tax can be turned into a demagogic weapon and a political football.

In the light of the ideological history of the tax this development should not be too surprising. In the Communist Manifesto of 1848, "a heavy progressive or graduated income tax" is listed as the second point of a ten-point program that Marx and Engels demanded in order to make "despotic inroads on the rights of property" and as "unavoidable as a means of entirely revolutionizing the mode of production." In the course of time "bourgeois" economists came to recommend such a tax in increasing numbers. But the excesses to which it has been carried (and which would have delighted Marx) have recently begun to produce a revulsion of feeling and thinking on the part of some economists who have had the courage to speak out.

A few years ago, for example, Harley L. Lutz of Princeton, arguing for a proportional income tax, contended that there was no logical stopping place to the progressive principle, based on the current specious form of the "ability to pay" theory, short of "complete equalization of incomes by confiscation of all incomes in excess of the lowest amount received by anyone." And more recently two University of Chicago lawyers, Walter J. Blum and Harry Kalven, Jr. (in The Uneasy Case for Progressive Taxation, University of Chicago Press), and the economist F.A. Hayek, have subjected the progressive-income-tax principle to searching criticism.

Let's try to set down some of the main objections:

This article is excerpted from Business Tides: The Newsweek Era of Henry Hazlitt (2011).