Save the Bluefin Tuna through Property Rights 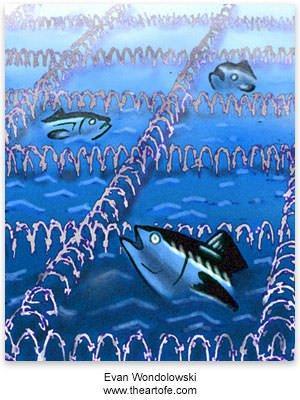 Over the past two weeks, National Public Radio (NPR) has carried stories on the plight of the bluefin tuna and on the conservation campaign designed to save the endangered fish. Restaurants and supermarket chains have pledged to boycott the delectable creature until governments lower fishing quotas. Some vocal fishermen naturally oppose reductions in their quotas, because this would hurt their livelihood.

The whole episode is just another demonstration of the conflict that arises whenever government regulation tries to solve a problem caused by a lack of property rights. If people owned portions of the ocean, then the bluefin tuna would become as ubiquitous as cattle.

We'll quote from an earlier NPR story to summarize the situation before a recently concluded conference that addressed the problem:

Conservation group WWF teamed up with supermarket chains and restaurants Wednesday to press countries to set stricter fishing regulations for Atlantic bluefin tuna during an international conference in Paris.

WWF says the fish, popular in sushi, is on the brink of collapse.

The companies joined WWF in pressing the International Commission for the Conservation of Atlantic Tunas, or ICCAT, to take "urgent action" to save the fish, which swims in the Atlantic and Mediterranean. …

WWF and other conservation groups want the 48 member countries of ICCAT to suspend or dramatically reduce the fishing quotas for the species.

Some fishermen, however, say such a move would lead to job losses and hurt their already suffering business.

As it turned out, ICCAT set the total allowable catch at 12,900 metric tons, a level that it claimed would allow "the maximum sustainable yield for bluefin-tuna fishing from now until 2022." According to ICCAT, "A balance between respect for the resource and the economic activity of the fishermen is possible."

Conservation groups were dismayed, calling the meeting a "total failure" for the bluefin tuna. Critics pointed out that even ICCAT's own scientific analysis showed that there was only a 70 percent chance that the new quota was consistent with sustainability of the tuna stock.

Tragedy of the Commons

The problem of overfishing is genuine. Maybe ICCAT's new quota will "work" and maybe it won't, but in any case there is a definite problem when fishermen can harvest fish at a faster rate than the fish reproduce. Economists call this a "tragedy of the commons," when each individual takes from the common resource without taking account of the impact on everyone else.

Originally, the concept of a tragedy of the commons was used to analyze a hypothetical medieval pasture, where each herder could let as many cattle graze as he wanted. Even if everyone could see that there were more cattle than the land could support, it would be in no one's interest to restrict his own herd, because someone else would simply offset the move by enlarging his own herd.

The tragedy of the commons in pastureland was solved by the enclosure movement, i.e., by assigning property rights to individual parcels of land. Thereafter, a herder needed permission from the owner in order to let his animals graze on a plot. The owner of the land was interested in maximizing the long-run services of his property and so he would restrict the total amount of grazing to below the outcome that occurred when the grass was available on a first-come, first-served basis to all herders.

The same general logic applies to aquatic resources, including fish. In principle, the problem of overfishing could be easily solved if "chunks" of ocean were transferred into private property. Rather than having a meeting of 48 governments to determine "the" quota, the owner(s) of each chunk of ocean could set an individual policy for that chunk.

To be sure, there would be logistical difficulties in privatizing the oceans. For example, if it turned out to be too costly to sink large nets deep enough into the water at the property lines, then the fish could easily swim from one owner's property into another's. The situation would be analogous to one on land before ranchers developed barbed-wire fencing.

"If people owned portions of the ocean, then the bluefin tuna would become as ubiquitous as cattle."

In such a scenario, one solution might be for entrepreneurs to buy many adjacent chunks in order to own an enormous volume of ocean water, so that the owner(s) of any consolidated property could expect to reap most of the benefits from limiting the amount of fishing that could take place on its surface.

Alternatively, it might make more sense to establish property rights in the sea creatures themselves, analogous to branding of cattle. To track their swimming property, the owners might use radio collars (for whales and large fish) or coat the schools of smaller fish with a harmless radioactive substance.

For someone who has never heard such proposals, these suggestions sound farfetched. But there is quite a voluminous literature on the topic, for example here and here.

Government-run enterprises suffer from the calculation problem described by Ludwig von Mises (originally in reference to full-blown socialism). Because they earn their revenues through coercive taxation, and because they often prohibit competition, government enterprises have no idea if they are serving their "customers" as efficiently as possible.

But beyond this fundamental calculation problem, there is also the more mundane incentive problem. Specifically, government officials who are in charge of "protecting endangered species" do not take nearly as good care of them as would private owners, who would personally reap the gains from increasing the market value of the resource.

For example, an African government could claim that it is committed to saving the white rhino, but in the grand scheme of things, how much will its officials really care about spending money to intercept poachers? Yet, in the case of white rhinos in southern Africa, when property rights were introduced — so that the animals were no longer contraband but prized possessions — the turnaround in population figures was astounding.

In the case of fishing, government regulations are often the epitome of inefficiency and unintended consequences. In a typical progression, the government might declare that people can fish only during a certain time of the year, but during the "fishing season" anything goes. The obvious result is that commercial fishermen equip themselves with high-capacity vessels that can extract enormous quantities of fish in very little time.

Even at this point, the outcome is wasteful. The expensive, state-of-the-art vessels are only in use for a small portion of the year — during fishing season — and otherwise lie idle.

Over time, as the commercial fishing boats become more sophisticated — and as more fishermen enter the industry — the government realizes that the fish population will not survive, even with the limited season. Thus, the government introduces new measures, designed to hinder the productivity of the fishermen. For example, the government might ban the use of nets bigger than a certain size or it might limit the size of vessel that can be taken onto the body of water.

All this foolishness would largely be eliminated with private ownership. The primary brake on overfishing would be the price that the owner of the chunk of ocean charged the commercial fishermen to "rent" his or her water. The owners of ocean wouldn't have any interest in forcing their customers to use inefficient equipment or techniques, and there wouldn't be arbitrary "seasons" except as they coincided with the natural biological cycles of the fish.

With ill-defined property rights, genuine conflict develops among people. Turning to government regulation will only exacerbate the problem, because government officials do not actually have the interests of "society" at heart. Only through genuine ownership can the problem of overfishing be solved. The bluefin tuna needs more capitalism!