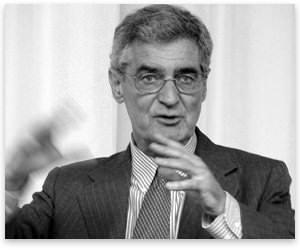 Lately the Mises Daily may have given the impression that we just bash Paul Krugman. In the interest of balance, today I will cast aspersions on another Nobel laureate, the Chicago School economist Robert Lucas. As is typical among many "promarket" economists, the undeniably sharp Lucas inexplicably sees no problem with government price fixing when it comes to interest rates.

The Federal Reserve's lowering of interest rates last Tuesday was welcome, but it was also received with skepticism. Once the federal-funds rate is reduced to zero, or near zero, doesn't this mean that monetary policy has gone as far as it can go? This widely held view was appealed to in the 1930s to rationalize the Fed's passive role as the U.S. economy slid into deep depression.

The present article is hardly the place to go into the debate over the Great Depression, but suffice it to say, Herbert Hoover's (and then FDR's) very conscious efforts to "maintain purchasing power" by preventing wage cuts was one major factor in turning the stock-market crash into a decade-long slump. (The fact that Hoover slapped on major tariff and income tax hikes didn't help, either.)

Lucas's view — namely, that the 1929 downturn would have been a run-of-the-mill depression, but the Fed's timidity turned it into the Great one — was popularized by Milton Friedman. It resonates well with free-market types, because after all, it blames the Depression not on laissez-faire capitalism, but instead on regulatory blunders.

However, as Matt Machaj argued in a previous Mises Daily, such rhetoric is difficult for a proponent of truly market-based money and banking to accept. Is it really government "intervention" if the Fed refrains from flooding the economy with more paper money?

Let me put it this way: if Lucas is right, and the Fed's "passive role" helps explain the genesis of the Great Depression, then what about all the little-d depressions that occurred in US history before the Fed was founded in 1913? Was the Fed even more passive in the 1930s than during its nonexistence the previous century?

But let us return to Lucas's article:

Fed Chairman Ben Bernanke's statement last Tuesday made it clear that he does not share this view and intends to continue to take actions to stimulate spending.

There should be no mystery about what he has in mind. Over the past four months the Fed has put more than $600 billion of new reserves into the private sector, using them to discount — lend against — a wide variety of securities held by a variety of financial institutions….

This action has been the boldest exercise of the Fed's lender-of-last-resort function in the history of the Federal Reserve System. Mr. Bernanke said that he is prepared to continue or expand this discounting activity as long as the situation dictates.

Before analyzing this statement, let's make sure we see just how bold this Fed exercise has been. Below is a chart of total bank borrowings from the Fed, from 1919 to the present. (If you squint your eyes, you can see the slight uptick to which Lucas refers.)

Now people have rightly focused on the dangers such a massive infusion poses to the strength of the dollar. These fears are entirely justified. But I want to focus on the political aspects of the recent Fed behavior.

Let us parse Lucas's description: the infusion of some $600 billion in just a few months has come from Fed loans to banks, based upon collateral that no one in the market would accept at face value (literally). Lucas himself says,

Could the $600 billion in new reserves be called a bailout? In a sense, yes: The Fed is lending on terms that private banks are not willing to offer. They are not searching for underpriced "bargains" on behalf of the public, nor is it their mission to do so. Their mission is to provide liquidity to the system by acting as lender-of-last-resort. We don't care about the quality of the assets the Fed acquires in doing this. We care about the quantity of its liabilities.

What's this "we," Ke-mo Sah-bee? It is amazing how flippant Lucas is concerning these new developments. He can barely bring himself to admit that a $600 billion infusion of new money — which no private investor would be foolish enough to make — constitutes a bailout. Moreover, Bernanke's pledge to continue this pattern as "long as the situation dictates" sounds an awful lot like a blank check.

Lucas's touching innocence is illustrated even more so with his endorsement of Bernanke's policy:

That last phrase in particular amused me. I confess I didn't actually try this, but I'm betting that if I emailed Mr. Bernanke and explained that my business was desperate for liquidity, he would inform me that I wasn't eligible for any of his generous loans.

I am not accusing Ben Bernanke of being anything more than a misguided academic. I believe his policies have been terrible during this crisis, but I am willing to attribute them to intellectual error. Be that as it may, he has opened Pandora's box. The precedent is now set for the Federal Reserve to make injections of hundreds of billions of dollars as it sees fit. In October, Barney Frank suddenly realized the awesome power that the Fed has held all of these years, according to this account:

"He [Bernanke] can make any loan he wants under any terms to any entity or individual in America that he thinks is economically justified. I asked the chairman if he had $85 billion to bestow in this way. He said, 'I have $800 billion.'"

Clearly unnerved after his exchange with Fed Chairman Ben Bernanke, Massachusetts Congressman Barney Frank, the chairman of the House Financial Services Committee, concluded that no one should have that kind of money to dispense as he sees fit.

Unfortunately, this realization will not lead to a return of the gold standard or (better yet) a complete return of money and banking to the market.

Rather, what will surely happen is that Congress will move to bring the Fed more closely under its control:

"He can't debase the currency at will! That's our job!"

The next few years are going to be very interesting. It is clichéd to say such things, but our country truly is moving through a revolutionary period. But I liked the Beatles song a lot better than Paulson and Bernanke's rendition.