The Progressive Conversion of Social Power into State Power 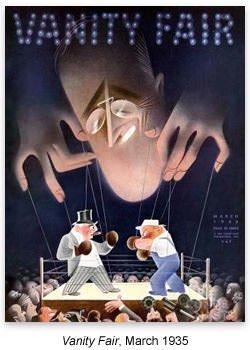 [From Our Enemy, the State]

If we look beneath the surface of our public affairs, we can discern one fundamental fact: namely, a great redistribution of power between society and the State. This is the fact that interests the student of civilization. He has only a secondary or derived interest in matters like price fixing, wage fixing, inflation, political banking, "agricultural adjustment," and similar items of State policy that fill the pages of newspapers and the mouths of publicists and politicians. All these can be run up under one head. They have an immediate and temporary importance, and for this reason they monopolize public attention, but they all come to the same thing, which is an increase of State power and a corresponding decrease of social power.

It is unfortunately none too well understood that, just as the State has no money of its own, so it has no power of its own. All the power it has is what society gives it, plus what it confiscates from time to time on one pretext or another; there is no other source from which State power can be drawn. Therefore every assumption of State power, whether by gift or seizure, leaves society with so much less power. There is never, nor can there be, any strengthening of State power without a corresponding and roughly equivalent depletion of social power.

Moreover, it follows that with any exercise of State power, not only the exercise of social power in the same direction, but the disposition to exercise it in that direction, tends to dwindle. Mayor Gaynor astonished the whole of New York when he pointed out to a correspondent who had been complaining about the inefficiency of the police, that any citizen has the right to arrest a malefactor and bring him before a magistrate. "The law of England and of this country," he wrote, "has been very careful to confer no more right in that respect upon policemen and constables than it confers on every citizen." State exercise of that right through a police force had gone on so steadily that not only were citizens indisposed to exercise it, but probably not one in ten thousand knew he had it.

Heretofore in this country sudden crises of misfortune have been met by a mobilization of social power. In fact (except for certain institutional enterprises like the home for the aged, the lunatic asylum, city hospital and county poorhouse) destitution, unemployment, "depression," and similar ills have been no concern of the State, but have been relieved by the application of social power. Under Mr. Roosevelt, however, the State assumed this function, publicly announcing the doctrine, brand new in our history, that the State owes its citizens a living.

Students of politics, of course, saw in this merely an astute proposal for a prodigious enhancement of State power — merely what, as long ago as 1794, James Madison called "the old trick of turning every contingency into a resource for accumulating force in the government" — and the passage of time has proved that they were right. The effect of this upon the balance between State power and social power is clear, and also its effect of a general indoctrination with the idea that an exercise of social power upon such matters is no longer called for.

It is largely in this way that the progressive conversion of social power into State power becomes acceptable and gets itself accepted.1 When the Johnstown flood occurred, social power was immediately mobilized and applied with intelligence and vigor. Its abundance, measured by money alone, was so great that when everything was finally put in order, something like a million dollars remained. If such a catastrophe happened now, not only is social power perhaps too depleted for the like exercise, but the general instinct would be to let the State see to it. Not only has social power atrophied to that extent, but the disposition to exercise it in that particular direction has atrophied with it. If the State has made such matters its business, and has confiscated the social power necessary to deal with them, why, let it deal with them.

"There is never, nor can there be, any strengthening of State power without a corresponding and roughly equivalent depletion of social power."

We can get some kind of rough measure of this general atrophy by our own disposition when approached by a beggar. Two years ago we might have been moved to give him something; today we are moved to refer him to the State's relief agency. The State has said to society, "You are either not exercising enough power to meet the emergency or are exercising it in what I think is an incompetent way, so I shall confiscate your power and exercise it to suit myself." Hence, when a beggar asks us for a quarter, our instinct is to say that the State has already confiscated our quarter for his benefit, and he should go to the State about it.

Every positive intervention that the State makes upon industry and commerce has a similar effect. When the State intervenes to fix wages or prices, or to prescribe the conditions of competition, it virtually tells the enterpriser that he is not exercising social power in the right way, and therefore it proposes to confiscate his power and exercise it according to the State's own judgment of what is best. Hence the enterpriser's instinct is to let the State look after the consequences. As a simple illustration of this, a manufacturer of a highly specialized type of textiles was saying to me the other day that he had kept his mill going at a loss for five years because he did not want to turn his workpeople on the street in such hard times, but now that the State had stepped in to tell him how he must run his business, the State might jolly well take the responsibility.

The process of converting social power into State power may perhaps be seen at its simplest in cases where the State's intervention is directly competitive. The accumulation of State power in various countries has been so accelerated and diversified within the last 20 years that we now see the State functioning as telegraphist, telephonist, match peddler, radio operator, cannon founder, railway builder and owner, railway operator, wholesale and retail tobacconist, ship builder and owner, chief chemist, harbor maker and dock builder, house builder, chief educator, newspaper proprietor, food purveyor, dealer in insurance, and so on through a long list.2

It is obvious that private forms of these enterprises must tend to dwindle in proportion as the energy of the State's encroachments on them increases, for the competition of social power with State power is always disadvantaged, since the State can arrange the terms of competition to suit itself, even to the point of outlawing any exercise of social power whatever in the premises — in other words, giving itself a monopoly. Instances of this expedient are common; the one we are probably best acquainted with is the State's monopoly of letter carrying. Social power is estopped by sheer fiat from application to this form of enterprise, notwithstanding it could carry it on far cheaper, and, in this country at least, far better. The advantages of this monopoly in promoting the State's interests are peculiar. No other, probably, could secure so large and well-distributed a volume of patronage, under the guise of a public service in constant use by so large a number of people; it plants a lieutenant of the State at every country crossroad. It is by no means a pure coincidence that an administration's chief almoner and whip-at-large is so regularly appointed postmaster general.

Thus the State "turns every contingency into a resource" for accumulating power in itself, always at the expense of social power; and with this it develops a habit of acquiescence in the people. New generations appear, each temperamentally adjusted — or as I believe our American glossary now has it, "conditioned" — to new increments of State power, and they tend to take the process of continuous accumulation as quite in order.

All the State's institutional voices unite in confirming this tendency; they unite in exhibiting the progressive conversion of social power into State power as something not only quite in order, but even as wholesome and necessary for the public good.

This article is excerpted from Our Enemy, the State.

Albert Jay Nock (October 13, 1870–August 19, 1945) was an influential American libertarian author, educational theorist, and social critic of the early and middle twentieth century. Murray Rothbard was deeply influenced by him, and so was the whole generation of free market thinkers of the 1950s.