The Politics of Johann Wolfgang Goethe 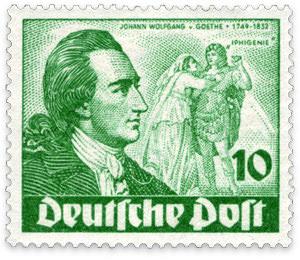 This year marks the 250th birthday of Johann Wolfgang von Goethe. Most Europeans know that he was the greatest of all German writers and poets and one of the giants of world literature. Less well known is that he was also a thorough-going classical liberal, arguing that free trade and free cultural exchange are the keys to authentic national welfare and peaceful international integration. He also argued and fought against the expansion, centralization, and unification of government on grounds that these trends can only hinder prosperity and true cultural development. Because of his relevance to the ongoing construction of Europe, I'd like to nominate Goethe as the European of the millennium.

Born in 1749 in the free imperial city of Frankfurt am Main into an upper-middle-class family, Goethe studied law in Leipzig and Strasbourg. However, on receiving his doctorate and practicing briefly as a lawyer, he set out on a spectacularly successful career as poet, dramatist, novelist, lyricist, artist, and critic of architecture, art, literature, and music. He was also a natural scientist and a student of anatomy, botany, morphology, and optics. To this day, he defines the meaning of genius, with a life oeuvre encompassing more than 60 volumes, including, besides his masterpiece Faust, such writings as Goetz von Berlichingen, The Sorrows of Young Werther, Torquato Tasso, Egmont, Iphigenia in Tauris, Clavigo, Stella, Hermann and Dorothea, Wilhelm Meister's Apprenticeship, Wilhelm Meister's Travels, Roman Elegies, West-East Divan, Elective Affinities, Italian Travels, Metamorphosis of Plants, and Theory of Colors.

In 1775, at the invitation of Duke Carl August of Saxe-Weimar, Goethe visited Weimar and took up residence there until his death in 1832, a stay that was interrupted by frequent and extended travels all across Germany, Switzerland, Italy, and France. It was surely while traveling that he developed his liberal political position.

From the 1648 Treaty of Westphalia and until the Napoleonic wars, Germany had consisted of some 234 "countries," 51 free cities, and about 1,500 independent knightly manors. Out of this multitude of independent political units, only Austria counted as a great power, and only Prussia, Bavaria, Saxony, and Hanover could be considered major political players. Saxe-Weimar was one of the smaller and poorer units, encompassing just a few dozen villages and small towns.

The Vienna Congress of 1815, which followed Napoleon's defeat, saw the number of independent German political territories reduced to 39. Owing to the family relationship of its ruling house with Russia's Romanoff dynasty, Saxe-Weimar grew by about one-third of its former size and became the Grand Duchy of Saxe-Weimar-Eisenach. Still, it remained one of Germany's smaller, poorer, and politically less significant countries.

Its capital, Weimar, was a small town of less than 6,000 inhabitants when Goethe moved there, and even at the time of his death in 1832 it had only grown to 10,000. Goethe had come to Weimar as Carl-August's favorite, and he and the Duke rode, hunted, and caroused together.

At the behest of Carl-August, Goethe was given the aristocratic honorific "von" by the Emperor Joseph II. At various times, Goethe's duties as a member of the Privy Council involved the supervision of the Duchy's 600-strong army (he reduced its size to 293), the construction of its roads and mines, the management of its finances (he cut taxes), the operation of the court theater, and the oversight of its nearby University of Jena, which at that time included among its faculty Hegel, Fichte, Schelling, Schiller, Humboldt, and the brothers Schlegel.

Already acclaimed throughout Germany when he settled in Weimar, Goethe's fame grew immensely in the following years. Whether it was on his travels or in Weimar, nearly everyone sought his company, including the likes of Ludwig van Beethoven, Empress Maria Ludovica of Austria, and Napoleon. Indeed, by the last decade of Goethe's life, he and Weimar had become synonymous with German culture, and Weimar and the Goethe residence became the objects of pilgrimages by members of the German Bildungsbuergertum (the educated bourgeoisie).

It was during this last phase of his life when Goethe, in a conversation recorded by one of his devotees, Johann Peter Eckermann, commented on the relationship between Germany's political particularism (Kleinstaaterei) and culture. At the time these remarks were made, on Oct. 23, 1828, Germany had become increasingly affected by democratic and nationalistic sentiments as a result of the French Revolution and the subsequent Napoleonic era. Most of the German liberals had become democrats and advocates of a unified German nation-state.

As a classical liberal, Goethe, wisely and with remarkable prescience, stood largely alone in firm opposition to this transformation of the liberal creed. In his view, democracy was incompatible with liberty. "Legislators and revolutionaries who promise equality and liberty at the same time," he wrote in his Maximen und Reflexionen, "are either psychopaths or mountebanks." Political centralization, as Goethe explained in his conversation with Eckermann, would lead to the destruction of culture:

I do not fear that Germany will not be united; our excellent streets and future railroads will do their own. Germany is united in her patriotism and opposition to external enemies. She is united, because the German Taler and Groschen have the same value throughout the entire Empire, and because my suitcase can pass through all thirty-six states without being opened. It is united, because the municipal travel documents of a resident of Weimar are accepted everywhere on a par with the passports of the citizens of her mighty foreign neighbors. With regard to the German states, there is no longer any talk of domestic and foreign lands. Further, Germany is united in the areas of weights and measures, trade and migration, and a hundred similar things which I neither can nor wish to mention.

"One is mistaken, however, if one thinks that Germany's unity should be expressed in the form of one large capital city, and that this great city might benefit the masses in the same way that it might benefit the development of a few outstanding individuals," he added.

Would that today's Brussels bureaucrats understood this! The single EU market has given the 15 member states the open borders--to people, goods and capital--that Goethe praised in 1828. Free trade and migration are a reality. But what is not needed is a "large capital city" or a federal state to regulate, or further complicate, life.

Goethe recognized that the genius of the people lay with the people, and not with the bureaucrats. He told Eckermann that "what makes Germany great is her admirable popular culture, which has penetrated all parts of the Empire evenly. And is it not the many different princely residences from whence this culture springs and which are its bearers and curators? Just assume that for centuries only the two capitals of Vienna and Berlin had existed in Germany or even only a single one. Then I wonder what would have happened to the German culture and the widespread prosperity that goes hand in hand with culture."

"Think about cities such as Dresden, Munich, Stuttgart, Kassel, Braunschweig, Hanover, and similar ones; think about the energy that these cities represent; think about the effect they have on neighboring provinces, and ask yourself, if all of this would exist if such cities had not been the residences of princes for a long time."

"Frankfurt, Bremen, Hamburg, Luebeck are large and brilliant, and their impact on the prosperity of Germany is incalculable. Yet, would they remain what they are if they were to lose their independence and be incorporated as provincial cities into one great German Empire? I have reason to doubt this."

As highly as Germans revered Goethe as a national hero, they have not heeded his advice this century, not even at the end of the Cold War. Nor have most people in Europe paid heed to his warnings on the dangers of political centralization. Pertinent today as they were when written, Goethe's insights regarding the social and political foundations of culture still demand our attention.