GET NEWS AND ARTICLES IN YOUR INBOXPrint
A
A
Home | Mises Library | Housing Bubble: Myth or Reality? 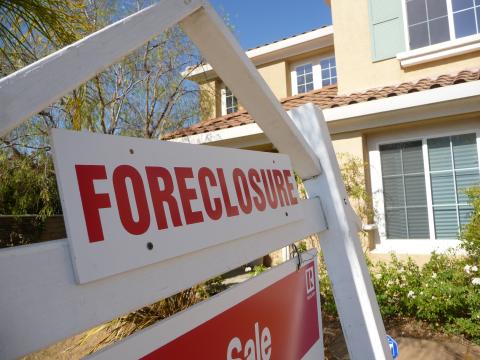 Federal Reserve Chairman Alan Greenspan said on Thursday, during questioning by the Senate's special committee on aging, that he does not believe that a housing price bubble exists on a national level in the United States.

"The notion of a bubble bursting and the whole price level coming down seems to me as far as a national nationwide phenomenon, is really quite unlikely," Greenspan said. He does say that it is unrealistic to believe that housing prices will increase at the current rate, but as for a bubble, he says no way.

Is he right? To provide an answer to this one needs to establish, or define, exactly what a bubble is.

Historically, between 1970 to 1994 there was a 12-month lag between changes in the federal funds rate and its effect on industrial production (see chart). Since 1995 onward, the inverse correlation between the lagged fed funds rate and industrial activity ceased to exist. We suggest that this has something to do with the possibility that the pool of real funding is in trouble. In other words, as long as the pool of real funding is growing the loose monetary policies of the central bank appear to "work". This is because the nonproductive activities supported by loose monetary policies masquerade as wealth generating activities.

However, this illusion is shattered once the pool of real funding stops growing. There is the possibility that this is what may be taking place at present. Despite the aggressive lowering of the fed funds rate since the end of 2000, industrial activity in relation to its long term trend has remained depressed (see chart).

We suspect that the prolonged monetary abuses of the Fed may have severely undermined the ability of the economy to generate sustainable real production in the future. In short, loose monetary policy sets in motion consumption that is not supported by a corresponding production and thereby dilutes the pool of real funding.

A major increase in US monetary pumping began in the early 80's with the advent of financial deregulation, which, for all its merits in permitting financial entrepreneurship, also removed various restrictions on banks' lending "out of thin air."  The quantity of money AMS in relation to the trend between 1959–1979; i.e., the trend prior to financial deregulation, can assist in assessing the magnitude of monetary pumping since 1980 onwards. 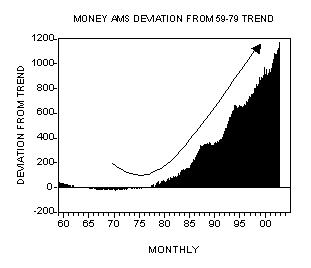 If the pool of real funding is in trouble at present then this is likely to undermine various markets including the housing market. Moreover, the more aggressive the Fed's loose stance is, the worse it is for the productive capacity of the economy. This in turn raises the likelihood that the liquidation of past excesses is likely to be imposed in earnest this time around.

Observe that the likely burst of the housing market bubble is on account of the decline in the pool of real funding and not a tighter stance on the part of the Fed. This contradicts the popular view, which holds that as long as the Fed keeps interest rates at low levels the housing market will remain strong.

The magnitude of the housing price bubble is depicted in the following chart in terms of the median price of new houses in relation to the historical trend between 1963–1979. In this regard the median price stood at 73% above the trend in December 2002 (see chart).

There are already signs that the housing market may not be far from its peak. Purchases of new homes dipped to their lowest level in a year in January. The Commerce Department said new home sales fell to a seasonally adjusted annual rate of 914,000 units in January, the slowest pace since January 2002. The percentage drop, at 15.1 percent, was the biggest one-month decline in nine years.

Our monetary analysis raises the likelihood that the cyclical component of home sales is likely to remain under pressure (see chart). Furthermore, year-on-year, the median price of new houses fell by 2.6% in January after rising by 6.7% in the previous month (see chart).

Although commercial bank real estate loans remain buoyant, the likely weakening of the housing market will put a brake on the growth momentum of these loans (see chart). This in turn is likely to weaken the growth momentum of money AMS and further undermine various nonproductive activities. There are some indications that demand for mortgages may be weakening. The MBA mortgage applications index fell by 7.5% in the week ending February 21 from the previous week (see chart). Moreover in the week ending February 19 commercial bank real estate loans fell by almost $10 billion from the previous week.