GET NEWS AND ARTICLES IN YOUR INBOXPrint
A
A
Home | Mises Library | The Fed: The Chicago School's Achilles Heel 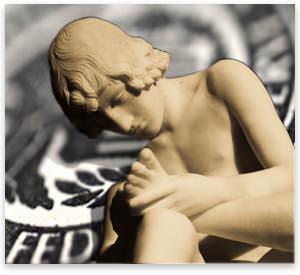 In a recent post "Triumph of the Austrian Economists," David Frum laments the displacement of the respectable Chicago School as the economists of choice among the political Right. Frum fails to see that conservative Republicans are justified in switching their allegiance to the Austrian economists, because supply-side monetarists have a glaring blind spot when it comes to the Federal Reserve.

Frum is dismayed at the resurgent interest in Austrian analysis and policy recommendations:

An important subtheme of Noah Green's survey of Fed critics is the triumph of Austrian over Chicago economics within the modern political right.

Thirty years ago, right of center economists did not accept recessions as necessary and indeed healthful responses to speculative bubbles. They still winced at the memory of Hoover era officials who welcomed the Great Depression as a means to "purge the rottenness" from the market system.

Thirty years ago, right-of-center economists did not celebrate high interest rates as a safeguard of the currency. Thirty years ago, they measured inflation by the dollar's ability to buy goods and services — not its value relative to gold or some other commodity.

In the first place, Frum seems to have forgotten that, after several years of Republican control of both Congress and the White House, we are in the midst of the worst economic crisis since the Great Depression. For all I know, the president ignored their advice, but the refusal of economic advisers to George W. Bush to sign a letter hardly makes me suspicious of the letter's soundness.

Before delving into the main focus of this article — namely, the superiority of the Austrian over the Chicago School when it comes to the insidious role of the Fed — I want to correct two historical errors in Frum's condescending post:

Frum's line about "Hoover era officials" who wanted to "purge the rottenness out of the system" is a reference to Andrew Mellon, treasury secretary to Herbert Hoover. In Hoover's memoirs, he describes the White House discussions following the stock-market crash of October 1929. Hoover explains that Mellon did indeed advocate a policy of liquidationism, in which the federal government would stand back and allow the market to run its natural course.

This is the point at which modern Keynesians — a category that includes David Frum himself, whether or not he chooses to use the label — stop quoting from Hoover's memoirs. "Aha!" they say, "Hoover sat back and did nothing, and that's why the 1929 crash turned into the Great Depression. Quick, let's spend some more borrowed money!"

Unfortunately for the Keynesians, if they would just read the very next page in Hoover's memoirs, he explains that he rejected Mellon's advice. Even though people like Paul Krugman, Brad DeLong, and yes, David Frum continue to insist otherwise, Herbert Hoover was a big-government man who instituted a New Deal lite.

Incidentally, that is why the financial crash that occurred on his watch mushroomed into the Great Depression. If Hoover had actually been the laissez-faire ideologue portrayed by his critics — if Hoover really had done nothing much, just as his predecessors did when facing their own financial panics — then modern Americans wouldn't know anything about him. How many Americans can confidently identify the presidents during the Panic of 1819 or the Panic of 1907? Yet everybody "knows" that Herbert Hoover caused the Great Depression because he believed in pure capitalism.

Besides perpetuating the myth of a liquidationist Hoover, Frum also seems to be ignorant of how the Volcker Fed ended the Carter-era stagflation and ushered in the "Great Moderation." Specifically, Paul Volcker restored people's faith in the US dollar by jacking up interest rates and by stabilizing commodity prices (as explained at the time in the Wall Street Journal by Arthur Laffer, whose Chicago School bona fides Frum presumably can respect).

The Achilles Heel of the Chicago School

People often ask me why I call myself an Austrian economist, as opposed to a more generic "free-market economist." After all, what's the big difference between the average Austrian and the average supply-side monetarist?

Beyond the methodological differences, in practice the Chicago School has one major shortcoming: its neglect of capital theory. Specifically, many followers of Milton Friedman think that the Fed is "doing its job" so long as the CPI does not rise too quickly.

and Friedrich Hayek pointed out long ago that this "[consumer] price stabilization rule" would lead to disaster. Indeed, Murray Rothbard stressed that the stock-market bubble of the late 1920s — fueled by the Fed's policies — did not coincide with rampant consumer-price inflation.

We saw a similar pattern in our times, during the housing-bubble years. Many prominent Chicago School economists thought everything was fine. After all, the Bush administration had (modestly) cut tax rates, and although it had increased spending far too much, that would hardly sow the seeds for a minidepression. It was also true that Fannie Mae, Freddie Mac, and other government incentives were pushing banks into making risky loans, but I do not recall any Chicago School economists before the crash saying that this would devastate the economy.

On the other hand, there were plenty of academics and investors who relied on Austrian business-cycle theory to diagnose the housing bubble. They quite rightly understood that the Greenspan Fed's decision to push interest rates down to incredible lows would distort the capital structure of the economy (the regulation of which is, after all, what the market-interest rate is for, in the Austrian view). Artificially low interest rates could generate a euphoric boom, but it would inevitably give way to a bust.

Paul Krugman is right when he says that many of the current critics of Keynesian policies were caught completely flat-footed by the housing crash. In contrast, some interventionist economists (such as Nouriel Roubini) went on record with surprisingly accurate predictions of how fragile the economy was.

Conservative Republicans have traditionally associated themselves with the Chicago School. But if the only choice is between that approach — especially in its most extreme rational expectations form — and the worldview of a Roubini or Krugman, conservatives will appear incapable of explaining major crashes, which is a rather serious weakness.

No school of economic thought is perfect; I personally learned more about international trade from the work of Arthur Laffer than I have from the Austrians. But when it comes to explaining the boom-bust cycle — and recognizing the dangers of Bernanke's actions — I turn to the Austrians.