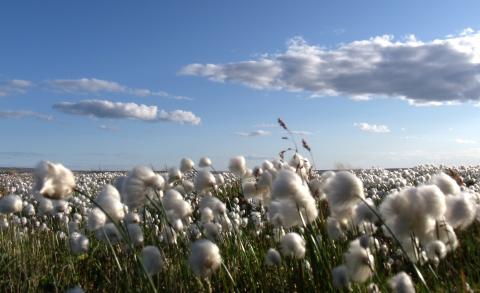 What is and what is not free trade is a source of unending confusion, as the new World Trade Organization ruling on cotton demonstrates.

It's a good thing to have the cotton subsidy racket receive a thorough thrashing, even if at the hands of an unnecessary and objectionable body such as the WTO. If it results in a pullback for such subsidies, all to the good. It is sheer nonsense for the US cotton industry to claim that cotton somehow "stands above all other crops" in "its contribution to the US economy"—or, rather, if this is true, let cotton stand on its own two feet.

The Bush administration pulled back from its disastrous steel tariffs only when threatened with WTO-approved sanctions. A regime whose policies are protectionism at home and war abroad, ignoring all critics and indefinitely locking up dissident citizens as "enemy combatants," needs to be checked by some institution. And as contentious as these WTO disputes are, they remind us of how much more civil the world of economics is than that of war.

Still, the US subsidy to cotton, which keeps production costs high and prices (relatively) low because of surpluses, is not somehow unfair to cotton farmers abroad, anymore than Brazil's subsidies to its aircraft industry are unfair to the US and Canadian aircraft industries. In the real world, there is no such thing as a "level playing field" in which producers all face the same costs of production; no seller and no buyer anywhere enjoys a right to compete only against suppliers and buyers who sell and buy at an approved price.

By way of background: complained that subsidies ($12.5 billion between 1999 and 2003) make it hard for to earn a high price for its own cotton exports. In its case, estimated that production would be 29 percent lower and cotton prices would be 12.6 percent higher in the absence of US subsidies. This would supposedly help 's farmers sell more cotton—a theory that forgets that higher prices, all else equal, lead to more production from all sources.

policies appear especially objectionable when considering the $1.7 billion that American manufacturers and agribusinesses are given by the government to purchase the higher priced cotton. Maybe the should just send billions to all the people involved and save everyone the trouble of producing and buying cotton. That way farmland can be better used for more economically justifiable projects.

Put aside the picture-perfect price models that used in its WTO argument, and consider the case on principled grounds. The WTO decision is certainly a victory for US taxpayers. It might also be a benefit to 's cotton growers, though no one can say for sure how the prices and industry would shake out in a real market economy. It is not, however, a victory for free trade as such. To understand why requires us to try to think about this topic with some degree of intellectual discipline.

Free trade means the unencumbered exchange of goods and services, and nothing more or less. This means, for example, if wine from anywhere is knocking at our border's door, US consumers should be free to buy it. Free trade does not insist that the wine be produced and sold on a "level playing field" with everyone else. It does not demand that costs of production be the same in all countries. The right to buy and sell is not conditioned on the existence of a mythical, perfectly competitive environment.

What if subsidizes its wine production? That's too bad for 's taxpayers, but great for the rest of the world, which enjoys lower wine prices due to expanded production (all else equal). 's wineries won't like it—no producer anywhere wants to be underpriced—but that's the way it is. The goal of production is consumption, and consumers are quite happy. It is their interest which is the closest proxy to the public interest.

What if the government refuses to let the wine in for whatever reason? Americans will pay higher prices than they would otherwise have to, which only increases the waste of resources. wineries will be permitted to sell at a price higher than the free-trade price. This piles injury upon injury, and waste upon waste. 's wineries are the only parties benefiting from this, and only because they enjoy a subsidy.

Another example: if France squanders its national wealth to boost cheese manufacturing, that's a tragedy for those who pay—French taxpayers should rise up in anger—but an unmitigated boon for cheese eaters around the world, who enjoy cheese at cheap prices. What about those other cheesemakers around the world who long for higher prices? They will have to compete in other ways or get out of the business.

To be sure, no government should be so stupid as to subsidize any industry anywhere. If 's wineries or 's cheese makers cannot make it on their own terms, they ought to go out of business. It is sheer waste to steal from some to give to others to produce goods and services at high cost. That some governments do such dumb things is no justification for preventing consumers from getting good deals. Would you pay someone 30% more to mow your grass simply because his competition got his equipment for free?

If we waited for every government in the world to stop manipulating domestic production through interventionist measures, no country would have ever traded with any other. In fact, within the , the states wouldn't trade with each other. In any case, the WTO is not even seeking such a world. The rules permit the to subsidize its cotton production with $1.6 billion per year. The defended its additional subsidies as nothing more than a domestic subsidy that does no harm to global markets. That is technically true.

What we have here is a very old practice at work. The institutions of international trade are being dragged into a policy that aspires to create producer price parity across borders. This is a hopeless project, and the WTO will be no more successful at this than the other would-be world economic planners who have attempted this for the better part of a century.

With or without a WTO ruling, the should scrap its cotton subsidies, as an example to the world. It should eliminate all the billion-a-day subsidies it dumps on agriculture. The Brazilians would no longer be able to scapegoat the US for the inefficiencies of their own producers, and everyone could be assured that whatever prices prevail in the world are precisely what they should be.

It is US taxpayers, the main victims, who ought to be petitioning for an end to central planning. The cotton industry cannot continue its announced policy to "Reduce trade distorting agricultural subsidies worldwide, but preserve important domestic and export programs as long as necessary to compete with the treasuries of cotton’s competitors, including the export credit guarantee program." That is rank hypocrisy, and it is hardly surprising that it is resented around the world.

In all this wrangling, even the political left seems to have learned an economic lesson, and is now agitating for an end to the massive subsidies on US agriculture—not in the name of free trade as such, of course. The developing world probably does enjoy a comparative advantage in the production of certain agricultural goods. Only a free market within and between all countries can honestly sort out questions of production and geography.

As for US producers who have lived the lush life on subsidies, they ought to seek redress for the loss of subsidies in the form of dramatically reduced taxes and regulations. Eliminating the whole of the planning apparatus would put American producers in a better position to compete. If this means dramatic cutbacks for the cotton industry, so be it: the free ride can't last forever.