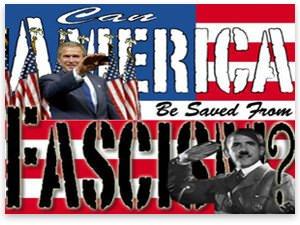 Fascism has attained to the dignity of a cuss word in America. When we disagree with a man's social or political arguments, if we cannot reasonably call him a communist, we call him a fascist. The word itself has little more relation to its original and precise object than a certain well-beloved American expletive has to the harmless domestic animal it actually describes. But fascism is something more than a bad name. If we are to have an eye cocked for fascism and fascists in this country we had better be sure we know a fascist when we see one. Of course we will recognize him in an instant if he will go about in a Bundist uniform or storm trooper's black shirt. But what if he wears no such uniform, has never learned to goose-step, speaks with no German gutturals or Italian gestures but in excellent seaboard English and is, in fact, a member of a patriotic American society or labor union and actually hates Hitler and Mussolini and wants them trapped, tried, and strung up — how then will we detect him?

There is a difference between a fifth columnist working in America for Hitler, Mussolini, or Stalin, and an American who would give his life for his country but would also like to see its social and economic life changed in the direction of the fascist pattern. You will get no such American to admit that what he believes in is fascism. He has other and more agreeable names for it. He would be provoked to knock you down if you called him a fascist. That is because he does not know what fascism is and makes the mistake of supposing that a fascist is one who is on the side of the Führer or the Duce. Dollfuss was a fascist and so was Schuschnigg, but neither of them was noticeably on the side of Hitler and one was assassinated and the other seized and imprisoned by Hitler. Metaxas in Greece was a fascist, but he was far from being a champion of his warlike neighbor who finally drove him from his fascist dictatorship and his country.

There are far too many misconceptions of the meaning of this explosive word. Many suppose that fascism is just a trade name for the modern, streamlined dictatorship. Hence they see little difference between the fascist Hitler and the communist Stalin. Both are dictators. They preside, however, over very different systems of society. They are despots ruling over totalitarian states, but the social structure of Russia is no more like the social structure of Germany and Italy than the state of Stalin resembles the state of Nicholas II.

Because our attention is fixed upon the element of dictatorship — which is just one ingredient of that order — we dismiss the whole thing as merely a form of gangsterism. Hence we hear such loose and superheated definitions as this: that it is a "revolt against Western culture" or "an attack upon our civilization." It is, alas, not a revolt against Western culture but a fruit — bitter and poisonous — of that culture.

We get far too much of our information about fascism from the daily reports of its dramatics — its marching black or brown shirts, its saluting legions, its posturing leaders, its violent techniques for obtaining power, its persecution of Jews, its suppression of free speech, and, finally, its inevitable adventures in the dark field of imperialism. These are the products of regimes that are built on violence, and violence is the essential weapon of every kind of dictatorship, whether it be the dictatorship of the royal Louis XIV or the proletarian Joseph Stalin. It is violence and force that create the incidents and episodes that make the material of news. There are other weapons and instruments of policy in the arsenal of the fascist besides the castor-oil bottle, the torch, and the sword. What we must seek are those other instruments that distinguish the fascist dictatorship from all other dictatorships. What we must understand is that these fascist dictators are popular dictators, by which I mean dictators who, though by no means loved by the people, nevertheless hold their power through them. They are demagogic dictators as distinguished from purely military dictators. The regime includes a group of social and economic ingredients without which the dictatorships could never have been established and without which they could not have lasted so long.

There is a whole library of pamphlets, books, and orations produced to prove that fascism was caused by the Treaty of Versailles or by the greed or stupidity of Britain and France, or by the ingrown wickedness of the German or the supine flabbiness of the Italian, by anti-Semitism or munitions profiteers, by the conspiracies of business magnates or the rising hatred of the free world of the scholar. Yet fascism grew up in Italy without any push from anti-Semitism and it flourished there before it did in Germany, which is supposed to be the peculiar victim of Versailles. It has made its appearance in Greece and the Slavic Balkans as well as in "Nordic" Germany and Latin Italy and in Portugal where there were no munitions magnates to stir the broth.

You may hear any day angry discussions of the course of events in Washington. You will hear ardent New Dealers assert that the government is building a great buttress around the crumbling walls of democracy. Others tell you, with equal assurance, that the order being fashioned there is obviously National Socialism, while still others are quite as sure that it is communistic. Certainly it cannot be all these things. It is, I fear, reasonably certain that most of those who damn the present Washington regime look upon it as Red — and take Mr. Dies's revelations of the number of Communist Party members and fellow travelers who have penetrated the bureaus as evidence that we are on our way to bolshevism. The fears of these critics are very much alive, and they grow in virulence. Yet we cannot afford to be in doubt about the real meaning and direction of our policies.

If we have any doubt, therefore, about what fascism is we would do well to resolve them. And the best way to do that is to examine it in the land where it began. If we will look at it in Italy, how it arose, what produced it, and what it in turn created as a system of national life, we cannot possibly be in doubt about what it is. It was in Italy where it was first established, where it reached its full flower and had its longest experience. If we will look at it there we can isolate its essential elements. And when we do this we will perceive that its roots run deep and long through the very structure of that society, that they are roots not indigenous to Italy but are to be found in all Western societies.

What follows, therefore, is not a history of fascism or the story of Mussolini's rise to power, but rather a search for the elements of this outrageous growth in order to make a list of those elements that must be united to produce it in America.

This article is excerpted from As We Go Marching (1944).